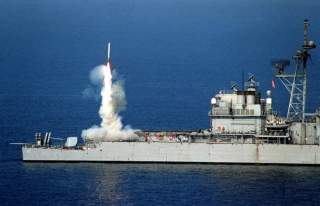 The Navy is pursuing high-tech seeker upgrades to the submarine and ship-launched Tomahawk missile as a way to better enable the weapon to destroy moving enemy ships at sea.

The idea is to engineer a Tomahawk missile able to engage and destroy fast-moving near-peer rival ships and land targets in a wide variety of anticipated threat environments. For instance, should there be combat engagements with Russia or China, U.S. weapons, missiles and assets will need to operate in more challenged or contested environments – such as a scenario where satellites or GPS communications and navigational systems are destroyed.

The Navy’s 2017 budget request includes $439 million to develop and integrate the software and hardware for this advanced Tomahawk modernization program.

“Development of enhanced TACTOM modernization, which integrates seeker technology and processing capability to the missile, is scheduled to commence in FY17 (fiscal year 2017) with a projected Initial Operational Capability in FY22 (fiscal year 2022),” Johnson added. “These modernization kits include a seeker with an associated data processor, cables and harnesses which will be integrated into the TACTOM All-Up-Round missile.”

“We are adding a seeker capability so that you would have a midcourse and terminal guidance load for the Tomahawk where it would be able to autonomously detect, track and intercept a moving target on either land or sea,” Dave Adams, Tomahawk Program Manager, Raytheon, told Scout Warrior in an interview.

A semi-active or passive seeker relies upon the transmission of a signal from a ship-based illuminator – whereas an active seeker is able to forward transmit and electromagnetic seeker and analyze the return in order to locate changing or fast moving targets.

“Active seekers fundamentally transmit and look for a return as opposed to a semi-active seeker where you have an off-board illuminator. All of those are options that you can pick depending upon the threat environment.

An active seeker actually transmits some amount of power into the desired area and looks for returns from that,” Adams added.

Technology which allows the Tomahawk, which is fired from both surface ships and submarines, to strike moving targets brings substantial tactical and strategic advantages.

“You can launch a Tomahawk and make a decision that there is a higher priority target to go after – if troops on the ground are calling for air support, you can communicate with the missile. I can communicate to the missile faster and faster and keep providing the missile with GPS coordinates as the missile is moving. I have to have surveillance assets and determine the target’s position and feed that into the network. That data is then fed to the Tomahawk as a re-target,” Adams said.

Adams said that Raytheon developers are enthusiastic about a captive carry test of the new seeker wherein the technology was placed on the nose of a surrogate aircraft at the Naval Air Warfare Center Weapons Division, China Lake, Calif.

“We are now analyzing the data,” he explained.

The TACTOM missile is a 30-year missile with a planned recertification at its 15th year of service life.  The first TACTOM recertification is scheduled for FY19, he added.

“We will go through testing and subsystem development to be ready for installation in that 2019 timeframe – creating a recertified and modernized missile,” Adams said.

During this re-certification process, the Navy plans to integrate communications and navigational upgrades into the weapon so that it can better attack anticipated future threats over the next 15-years, Raytheon and Navy officials said.

“Over 3,600 U.S. TACTOMs have been produced to date.  Per the President's Budget the final year of procurement is scheduled for FY17.  With a 30-year service life the missile will be in the active inventory until the late 2040s,” Johnson said.

The active seeker is designed to complement and existing technology already integrated into the Tomahawk called Synthetic Guidance Mode; this uses a higher-throughput radio signal to update the missile in flight, giving it new target information as a maritime or land target moves, Adams explained.

The idea is to engineer several modes wherein the Tomahawk can be re-targeted in flight to destroy moving targets in the event of unforeseen contingencies. This might include a scenario where satellite signals or GPS technology is compromised by an enemy attack. In this case, the missile will still need to have the targeting and navigational technology to reach a moving target.

“In a changing threat environment, you have to provide contingencies for yourself if some communications are not available,” Adams said.

Tomahawks have been upgraded numerous times over their years of service. The Block IV Tomahawk, in service since 2004, includes a two-way data link for in-flight re-targeting, terrain navigation, digital scene-matching cameras and a high-grade inertial navigation system, Raytheon officials explained.

An active seeker would function alongside a number of existing Tomahawk targeting and navigation technologies such as infrared guidance, Radio Frequency or RF targeting and GPS systems. The current Tomahawk is built with a “loiter” ability allowing it to hover near a target until there is an optimal time to strike. As part of this technology, the missile can use a two-way data link to send back images of a given target before it strikes.

The weapon is also capable of performing battle damage assessment missions by relaying images through a data link as well, they said.

The Tomahawk missile has also demonstrated an ability to use its on-board camera to take a picture of a potential target, send it to a command center and then loiter until instructed to destroy that target, Raytheon officials told Scout Warrior.

The technology was used last year in a test-firing of a Tomahawk launched off a Navy surface ship off the coast of California, Chris Sprinkle, Raytheon Tomahawk program manager, told Scout Warrior in an interview several months ago.

“We are taking advantage of the capability that is already in the weapon. It took a picture of a target area and sent it to a controller. The controller selected the target out of the photo and gave those coordinates to the weapon,” Sprinkle said.

During the Navy-Raytheon test-firing, photos from the missile were sent from the ocean off the Southern California coast to a command center all the way in Bahrain in the Middle East, Sprinkle explained.

“Controllers at the 5th fleet in Bahrain were controlling a large number of Tomahawks,” he added.

The weapon used its data-link to send photos to the command center while the Tomahawk loitered near a potential target, Sprinkle said. The Tomahawk was used to destroy a mobile missile threat during the test, Raytheon officials said.

Raytheon and the Navy are also developing a new payload for the weapon involving a more-penetrating warhead called the Joint Multiple Effects Warhead System, or JMEWS. Previously sponsored by U.S. Central Command, the JMEWS would give the Tomahawk better bunker buster type effects — meaning it could enable the weapon to better penetrate hardened structures like concrete.

In addition, more than 200 Tomahawks were fired in NATO action in Libya in 2011.

Tomahawk missiles weigh 3,500 pounds with a booster and can travel at subsonic speeds up to 550 miles per hour at ranges greater than 900 nautical miles. They are just over 18-feet long and have an 8-foot, 9-inch wingspan.

“When they want to go kick down the door someplace, they send Tomahawks in so they can fly aircraft in that area without risk,” Adams said.