The U.S. Navy Has a New Way to Protect Its Aircraft Carriers from Enemy Missiles 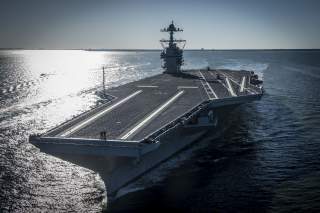 The new radar, called the Enterprise Air Surveillance Radar is slated to go on the now-under-construction USS Kennedy (CVN 79), as well as several of the services’ amphibs.

The new radar, called the Enterprise Air Surveillance Radar, or EASR, is slated to go on the now-under-construction USS Kennedy (CVN 79), as well as several of the services’ amphibs such as the LX(R) and its third big-deck America-class amphib, LHA 8.

Testing is slated for next year and technical development of EASR is now underway, Navy officials said.

"Enterprise Air Surveillance Radar successfully conducted Preliminary Design Review in March 2017 and is working towards Critical Design Review in August 2017,” Naval Sea Systems Command spokeswoman Christianne Witten told Scout Warrior in a written statement. “Developmental testing is scheduled to start in 2018 for EASR, and is expected to conclude in late 2019.”

“EASR is a SPY-6 variant, using identical hardware, signal processing and data processing. EASR will have the additional capability of air-traffic control radar, which ADMR does not have,” a senior Navy official told reporters.

Much like SPY-6, EASR is engineered to be cyber-hardened and reliable, according to Raytheon statements.

The AN/SPY-6 is described by radar engineers as being 35-times more powerful than most-current ship-based radar systems; developers say it enables detection of objects twice as far away and half the size compared with existing radars.

In radar terminology, a 15-decibel increase with AMDR translates into roughly 35 times more power and sensitivity compared to the existing AN/SPY-1D radar.

AMDR (AN/SPY-6) consists of S-band and X-band radars and a radar suite controller. Together, the technologies are able to scan, track and search the horizon and surrounding area for threats by sending an electromagnetic signal into the atmosphere, then analyzing the return signal of what it hits. The information can provide dimensions of a missile or other incoming threat by identifying its size, shape, location and trajectory.

Similar to its predecessor, the Aegis AN/SPY-1D radar, the AMDR includes a phased-array radar, Navy officials said. The S-band radar is engineered for long-range detection, whereas the X-band radar performs the over-the-horizon search capability, according to the service.

AMDR is optimized for anti-air and ballistic missile defense missions but is also capable in the anti-surface and counter-battery arenas.

Much like today’s AN/SPY-1D radar, the AMDR will be able to scan the surface as well, assisting with the fire-control technology needed to identify where an incoming threat can be intercepted.

The idea with EASR and AMDR is to give ship commanders more time and decision-making abilities by identifying approaching threats and enemy attacks more precisely and at much farther distances. This phenomenon is naturally of great relevance in today’s global threat environment wherein potential adversaries are quickly developing longer range, precision weaponry and electronic warfare systems. Giving commanders increased response time – when under attack – can save sailors lives and multiply offensive and defensive mission possibilities.

Furthermore, the need for more powerful radar is unambiguously strengthened by weapons developments now being pursued by potential US adversaries such as lasers and possibly hypersonic enemy weapons in the future.

The current Navy strategy hinges upon the recognition that providing needed advanced technology while establishing greater technical commonality better facilitates modernization and upgrades of radar systems across the fleet. Such an approach is also intended to improve sustainment, permit hardware to quickly integrate new software as threats emerge, and lower acquisition costs throughout the life-cycle of the system.

The decision for the new radar emerged out of a special radar commonality and affordability study conducted by the Navy which looked at finding technologies that would work across multiple platforms.

The EASR is being engineered as a 3-faced phased array radar designed to be adaptive and rotate.

For cost and cross-fleet commonality reasons, EASR was chosen as the future radars for carriers and amphibs, despite the fact that the first Ford-Class carrier uses Dual Band Radar.

Dual Band Radar was originally slated to go on 27 new, high-tech DDG 1000 destroyers. However, when the Navy changed plans and only decided to procure three DDG 1000s, the price of Dual Band Radar went up, Navy developers explained.

Navy developers say commonality and cost reduction are entirely consistent with integrating next-generation detection ability; further, carriers do not need radar as sensitive and powerful as Dual Band Radar, in part because carriers typically have a destroyer or a cruiser nearby to help protect it by providing a defensive radar envelope.

EASR will not have some of the technical capabilities of the Dual Band Radar such as fire control radar capability, however engineering the new EASR for the USS Kennedy, or CVN 79, will save the Navy $180 million in the cost of the ship.

EASR will, among other things, be configured to perform the functions of existing ship radars such as the AN/SPS-49 and the three-dimensional AN/SPS-48 anti-aircraft sensor currently on Navy destroyers and cruisers.

The Office of Naval Research previously helped develop the radar through a on a $6 million EASR study and development contract with Raytheon.

EASR radar could also be back fitted onto Nimitz-class carriers, which will be around through 2057.