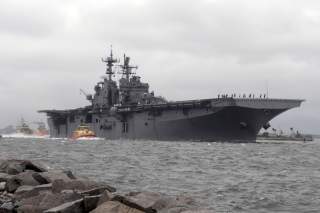 As these examples suggest, crisis containment is the likely avenue in unconventional scenarios like the one sketched above. When a response focuses on the irregular dimension, the onus is placed on the sponsor state to choose whether to accept deniable defeat or to back irregular forces with conventional support. Maintaining the illusion of Russian noninvolvement offers an off-ramp to Moscow in the event that provocations are successfully rebuffed. In other words, Moscow can disavow its combatants and avoid escalation without the domestic ramifications of a lost war.

So, assuming Estonia sees fit to respond, the U.S. sees fit to help, and both see fit to target the irregular dimension of the scenario: what of the Navy’s role? One option is, as we noted, to accept the political fiction of Russia’s distance from the crisis. Any Baltic, American, or NATO use of force in this case would be calibrated to provide just enough strength to repel the irregular actors. The objective is to avoid drawing the sponsor state openly and conventionally into the fight. History is no longer very clarifying for this next step, though. In only one of Altman’s green men cases—Peru’s seizure of Leticia—did a sea service play any significant role, and only after Peru (the aggressor) opted to escalate to conventional conflict. That is not to say, however, that the Navy is boxed out of a Baltic Sea scenario.

In this response scenario, the function of the U.S. Navy predominantly lays in clandestine operations, in the use of special operations forces. Navy SEALs, Special Warfare Combatant-craft Crewmen (SWCC), or covert riverine special operators can be inserted quickly and covertly to conduct direct action, foreign internal defense, or security force assistance operations in an irregular Baltic contingency. Narva, which lies along the Narva river between the Baltic Sea and Lake Peipus, may be particularly susceptible to maritime covert infiltration. Such an approach is, admittedly, not a dramatic display of naval capacity. Nevertheless, the objective of control of the sea is to use it to support operations ashore. In this case, U.S. sea power is a force enabler, delivering critical capabilities—from training, to targeting, to intelligence support, to direct action—without shattering the fiction of limited or no official state involvement (outside of Estonia). Responding in this way has the added value of enabling the United States to respond to an aggression on NATO’s eastern flank without invoking Article V and jeopardizing a conventional crisis—assuming, that is, that Russia opts not to escalate.

More conventional sea power can also play a role here, if indirectly, in deterring further spillover from an irregular crisis. One such option, for example, would be to maneuver a non-capital ship near the incident site (in my scenario, a Littoral Combat Ship). Without credible high-end combat power, an LCS serves a limited deterrent role independently. Nevertheless, any U.S. hardware in the area serves as a potential tripwire, indicating the likelihood that overt Russian support would precipitate a conventional U.S. response. Unlike ground forces, naval vessels can provide this tripwire capacity at various distances from a conflict. This maneuverability enhances the United States’ capacity for nuance when signaling to an adversary, and offers greater opportunity to modulate risk to U.S. service members. Thus, while the individual deterrent capacity of a non-capital ship like the LCS is low, the signaling capacity is far more nuanced than ground force deployment options and the message is clear: the Navy is committed to the fight. An important shortcoming to such commitment, however, is the consequences of war. Should a conflict turn conventional, any naval presence in the Baltic Sea will be highly vulnerable to Russian advanced coastal defense capabilities. Whether the risks to life and capability are worth the signal will be an important decision for American and NATO leaders.

Sea power is difficult, though not impossible, to bring to bear in an unconventional Baltic contingency. When considering the use of naval assets in an irregular scenario, it is helpful in closing to summarize their potential role in terms of the three characteristics of irregular conflict in the Baltic region.

Speed and distance act as immediate obstacles to leveraging U.S. sea power in the immediate vicinity of a Baltic scenario. The Navy will, in all likelihood, have to leverage whatever options are present at the time, not all of which will be optimal force projectors. Special Operations Forces and tripwire deployments present some options for short-circuiting this advantage in an irregular standoff, though at risk to deployed, non-clandestine forces.

Limited Russian aims further dictate and confine U.S. naval options. Special Forces present the Navy with the capacity to slow or repel irregular Russian-backed troops. Since they can be rapidly deployed, Special Forces reduce the likelihood of a fait accompli—the type of quick success that makes irregular campaigns attractive—while limiting (but not eliminating) the likelihood of conventional escalation. While naval tripwire forces may weigh on Russia’s strategic calculus, they rely on a successful rebuff by Baltic states since they would not blunt the initial success of an unconventional contingency.

Finally, ambiguity in the early stages of a campaign (in which the true costs of engaging are unclear) places perhaps the greatest constraints on sea power. The options discussed above assume that critical decisions are made in a timely manner. Independently, naval assets cannot influence such decisions at the political level, though naval intelligence assets could potentially help.

Of course, in any Baltic scenario, no matter how a response was calibrated, a crisis could escalate; what if Estonia invoked Article V? In these instances, the conflict could theoretically escalate to deescalate, with Russia realizing that it had miscalculated and unwilling to risk a war with NATO. The opposite seems just as plausible. And should war occur, options for leveraging United States sea power change dramatically. To read more about the high-end options for sea power in a Baltic fight, be sure to reach back for the full CNA publication later this autumn.

Joshua Tallis, Ph.D. is an analyst at CNA, a nonprofit research and analysis organization located in Arlington, VA. He completed his doctorate in International Relations at the University of St Andrews’ Centre for the Study of Terrorism and Political Violence. The opinions in this article do not necessarily represent the position of CNA.