The U.S. Navy Just Successfully Tested This Missile from a B-1B Lancer (and Russia and China Should Be Scared) 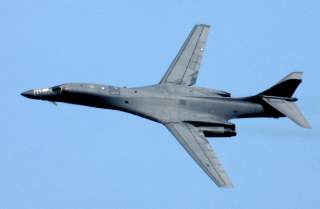 The U.S. Navy and Lockheed Martin have conducted the first free flight launch of an AGM-158C Long Range Anti-Ship Missile (LRASM) from a U.S. Air Force Rockwell International B-1B Lancer bomber. According to the navy, the flight test took place on August 17 over the Point Mugu Sea Range in California.

“This test represents a major accomplishment for the LRASM program and the dedicated team of government and industry professionals committed to accelerated acquisition,” Capt. Todd Huber, Naval Air Systems Command’s LRASM program director said in a statement. “Today marks a significant step towards providing the operational community with a leap in critical surface warfare capability by next year.”

According to NAVAIR, this is the first time the LRASM missile has completed an end-to-end flight test to show that the entire system works as designed. “This event marked the first end-to-end functionality test of LRASM, and proved the weapon's ability to identify and prosecute a moving target at sea,” reads a Naval Air Systems Command (NAVAIR) statement.

As one might expect, such a flight test was a relatively complex affair. “During the test, aircrew aboard the B-1B from Edwards Air Force Base launched the missile over Point Mugu Sea Range,” NAVAIR statement reads. “The missile navigated through all planned waypoints, transitioned to mid-course guidance and flew toward the moving maritime target using inputs from the onboard multimodal sensor. It then descended to low altitude for final approach to target area, positively identified and impacted the target from among a group of ships.”

The LRASM—which is the first increment of the Offensive Anti-Surface Weapon—is designed to fill an urgent need for a new anti-ship missile. “When operational, LRASM will play a significant role in ensuring military access to operate in open ocean and the littorals due to its enhanced ability to discriminate and conduct tactical engagements from extended ranges,” NAVAIR said. “Early operational capability for the LRASM is slated for 2018 on the U.S. Air Force B-1 Lancer and 2019 on the U.S. Navy F/A-18E/F Super Hornet.”

The LRASM can also be launched from ships and submarines. However, the U.S. Navy does not have any immediate plans to field such a capability on its ship—though the need is there. U.S. Navy warships are at a considerable disadvantage against Russian and Chinese warships that are equipped with weapons such as the P-800 Onyx.