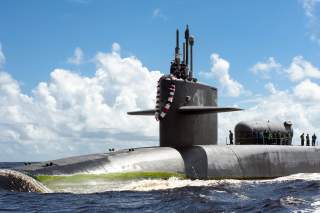 For more than a decade, inadequate defense budgets and a high operational tempo have forced the U.S. military to shortchange modernization in order to preserve force structure and near-term readiness. Even when a service initiates a new major acquisition program such as the Air Force’s F-35 fighter, B-21 bomber and KC-46 tanker, the numbers that will be procured each year are relatively small. This means that the military will be required to operate older platforms for years and even decades longer than planned. These older systems require more maintenance and upgrades to critical systems, which drain the resources available for modernization.

Nowhere is the problem more challenging than in the Navy’s submarine force. The Navy operates two different fleets of submarines. One is the nuclear-powered ballistic missile submarines (SSBNs) that constitute a leg of the nuclear triad. There are 18 Ohio-class SSBNs, 14 of which carry Trident sea-launched ballistic missiles and four that were converted to employ sea-launched Tomahawk cruise missiles and are officially designated as guided-missile submarines, or SSGNs.

The other underwater fleet consists of the nuclear-powered attack submarines (SSNs). The SSN fleet is comprised of three classes. The oldest are the 36 boats of the Los Angeles class. Next are the three Seawolf-class submarines. The newest of the SSNs and the only one currently in production is the Virginia class. 13 Virginia-class boats have been commissioned, and the Navy intends to continue producing them to replace the older classes of attack submarines.

There is an absolute requirement to modernize both the SSBN and SSN fleets. The Los Angeles-class boats are reaching the end of their nominal 33-year service life although life extension of 5 - 10 years is possible. The oldest of the Los Angeles-class SSNs, the USS Bremerton, was commissioned in 1981 and the youngest, the USS Cheyenne, was commissioned in 1996. So even with the most optimistic predictions about the Los Angeles class’ service life, the remaining 36 boats will have to be decommissioned over the next two decades.

The problem for the submarine force is that the need for attack boats is rising precisely as the Los Angeles class is being retired. According to recent Congressional testimony, U.S. Pacific Command operates about half the number of SSNs it requires and this is in peacetime. At the same time, both China and Russia are building large numbers of advanced conventional and nuclear-powered attack and cruise missile submarines.

The Navy once believed that 48 SSNs as part of an overall force level of 308 ships would be enough into the middle of the century. The Navy’s new goal is to maintain a 355-ship fleet, of which 66 would be SSNs. Unfortunately, the Navy’s 30-year shipbuilding plan does not build enough Virginias even to meet the prior, lower goal for the SSN force. At currently proposed building rates, the SSN fleet will decline to a low of 41 boats in 2029, seven short of the Navy’s original force structure plan and 25 below the new, higher target, before rising to 51 boats at mid-century.

The problem is even more serious concerning the SSBN fleet. Originally intended to operate for 30 years, the operational life of the Ohio-class SSBNs was extended to 42 years with a mid-life nuclear refueling and overhaul. Nevertheless, the first SSBN will reach the end of its service life in 2027. Each year thereafter, one additional Ohio-class boat will need to be retired. The Navy plans to begin construction of the Ohio-class replacement, the Columbia-class SSBN, in 2021 to ensure that the first of the new submarines is available for service in 2027.

To maintain the U.S. strategic deterrent, the Navy must ensure that Columbia-class SSBNs are produced on schedule. At the same time, to achieve the goal of 66 SSNs in the fleet by mid-century, the Navy must actually increase their production by nearly a third.

Fortunately, there is a solution. The current plan is to reduce production of SSNs from two to one in a year when construction of one of the 12 planned Columbia-class SSBN is initiated. The answer is to keep building two attack boats a year even when an SSBN is begun and to build three Virginias in those years without a Columbia. The Navy wants to begin this new strategy by adding a second Virginia-class boat to the production schedule in 2021.

The Navy is working closely with the two companies that build SSNs and would be responsible for construction of the Columbia-class SSBNs, General Dynamics Electric Boat (GDEB) and Huntington Ingalls Industries (HII). The collaboration produced a report that affirms the possibility of building both the planned 12 Columbia-class SSBNs and simultaneously increasing the rate of production of Virginia-class SSNs. Both GDEB and HII have developed master plans to expand their facilities, hire and train additional workers and assist their vendor bases in meeting increased demand.

For this strategy to be realized, funding would be required almost immediately to begin the expansion of facilities and the induction of additional workers. In addition, GDEB and HII will need to begin signing contracts with their suppliers for additional materials and long-lead items.

This plan would have a substantially positive impact on the global balance of naval power in favor of the United States. The Columbia-class SSBN will be a highly reliable and secure platform for the sea-based leg of the nuclear triad. The Virginia-class SSNs are being continually upgraded as successive blocks of submarines are produced. Newer blocks have greater reliability, reduced maintenance requirements, improved sensors and advanced weapons launch capabilities.

The newest Block V Virginia will possess the Virginia Payload Module (VPM), a group of four large vertically mounted launch tubes amidships, each of which could accommodate seven Tomahawk cruise missiles or large sea-launched ballistic missiles. As the Block V Virginias are deployed, their cruise missile capability will help offset the retirement of the four Ohio-class cruise missile submarines.