The U.S. Navy Needs a New Fighter (And Russia and China Are to Blame) 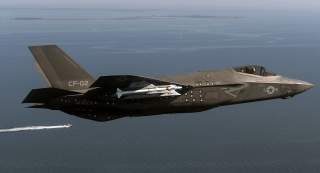 A new naval future fleet architecture study from the Center for Strategic and Budgetary Assessments (CSBA) suggests that the United States Navy will need to develop a dedicated air superiority fighter to counter Russian and Chinese advances.

“Counter-air operations will require low observable manned fighters with an unrefueled combat radius of more than 500 nm,” the CSBA report states. “These characteristics will keep refueling aircraft out of range of enemy air defenses while enabling the fighters to reach and engage bombers in a dynamic environment inside the enemy’s air defense envelope.”

The F/A-18E/F Super Hornet and the Lockheed Martin F-35C Joint Strike Fighter—which are not dedicated air superiority fighters—would not be suitable to defeat advanced adversary air defenses or enemy aircraft such as the Chengdu J-20 or other Chinese fifth-generation warplanes. “In contrast to today’s multimission strike-fighters, such as the F-35C, the design of these aircraft would need to focus mostly on the fighter mission rather than strike, so that they would have the speed, endurance, maneuverability, and air-to-air sensor capability needed for counter-air operations,” the report states.

The new fighter would not only have to engage other fighters, like the Cold War-era Grumman F-14 Tomcat, the new aircraft would have to intercept Russian and Chinese strategic bombers before they could launch their payload of anti-ship cruise missiles (ASCM) at a carrier strike group. But unlike the F-14, the new interceptor would have to eliminate enemy bombers inside the range of hostile air defenses.

“With the ranges of air-launched ASCMs increasing to 1000 nm, ships may not be able to use long-range surface-to-air interceptors such as SM-6s to engage enemy bombers before they can launch their ASCMs,” the report states. “CVW aircraft will need to conduct this counter-air mission. Long range ASCMs also enable an adversary’s bombers to launch attacks on the incoming Maneuver Force while the bombers are still protected by shore-based air defenses: defenses that can reach out to about 500 nm, depending on the target’s altitude.”

The CSBA report—which was commissioned by the U.S. Navy—calls for each carrier air wing to be equipped with one squadron of the notional new stealth fighters. However, the CSBA concept calls for a pair of carriers and air wings to operate together an integrated maneuver force rather than as part of a single strike group.

“Within the Maneuver Force, aircraft could be shifted between the two CSGs, so one CSG supports ongoing operations, while the other rearms and makes repairs or modifications on both carriers’ aircraft. And with multiple CVW aircraft available, the Maneuver and Deterrence Force could provide aircraft to the joint force, such as fighters and UCAVs to support land-based bombers, and have enough strike-fighters remaining for CAP, SUW, or CAS operations closer to the CVN,” the report states. “To fully exploit approaches like these, the proposed fleet architecture combines the Maneuver Force’s two CVWs into one large CVW. This model would require a larger air wing staff, but would be better suited for large-scale multi-dimensional war at sea.”

In addition to a new stealth fighter—which the Navy is already studying as part of its Next Generation Air Dominance or F/A-XX analysis of alternatives—the study also calls for the development of a long-range unmanned strike aircraft.

The Navy is taking the report very seriously as it studies how to rebuild its fleet after more than a decade of neglect. "The Navy is at an inflection point where we are back in competition,” chief of naval operations Adm. John Richardson told The National Interest in an emailed statement.

“Many of the ideas from these studies will help us win that competition.  To win, our thinking must sharp and these studies help us - they give us exactly what we want...some fresh ideas. Each study provided ideas that in some cases validated and advanced the Navy's current thinking.  Some of the recommendations from the studies are so sound that we will act on them quickly.  Other ideas show promise and we'll study those hard.  The studies will be rolled into our program of analysis, war games, experiments, technology demonstrations, and prototyping."