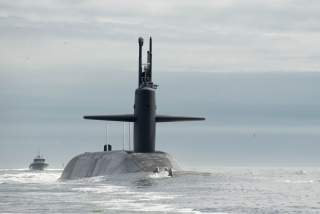 The Navy's new deal to produce the first 22 missile tubes for it new Columbia-class nuclear-armed ballistic missile submarines comes at time when the service is considering new build strategies for the submarines to address a massive funding shortfall for the top-priority program, Congressional and Navy officials explained.

"Navy officials testified that the service is seeking about $4 billion per year over 15 years in supplemental funding—a total of about $60 billion—for the Columbia class program," the report states.

The report suggests a number of strategic avenues through which the Navy might seek to ameliorate this funding shortfall; the suggestions include an increased use of "block" buys and "multi-year" contracts which can both increase volume and lower costs due to longer-range planning. Varying the schedule of production to allow for incremental funding over the years was also proposed by the report. Another recommendation was to reduce the amount of Columbia-class submarines built, an option not likely to be favored given the priority placed on undersea deterrence.

"Such a contract, which could be viewed as precedent-setting in its scope, could offer savings beyond what would be possible using separate block buy or MYP contracts for the two submarine programs," the report says.

The Congressional report also says the Navy could work on leveraging results from a specially-created National Sea-Based Deterrence Fund established in 2015.The fund was created by members of Congress as a way to allocate specific acquisition dollars to pay for the new submarines.

“This platform is being designed for 42 years of service life. It has to survive into the 2080s and it has to provide a survivable, credible deterrent threat,” Capt. David Goggins, Ohio Replacement Program Manager, told Scout Warrior in an interview earlier this year.

The Ohio Replacement Program is also engineering a new electric motor for the submarine which will turn the shaft and the rotor for the propulsion system. The new motor will make propulsion more efficient and potentially bring tactical advantages as well such as quieting technologies, Goggins explained.