The US Navy Is Now Facing Its Greatest Fear: Obsolete Aircraft Carriers? 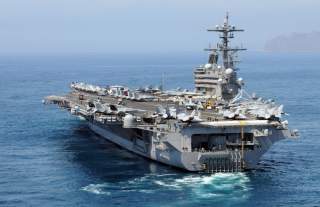 If the United States Navy is either unwilling or unable to conceptualize a carrier air wing that can fight on the first day of a high-end conflict, then the question becomes: Why should the American taxpayer shell out $13 billion for a Ford-class carrier?

That’s the potent question being raised by naval analysts in Washington—noting that there are many options that the Navy could pursue including a stealthy new long-range, carrier-based unmanned combat aircraft or a much heavier investment in submarines. However, the current short-range Boeing F/A-18 Hornet-based air wing is not likely to be sufficient in the 2030s even with the addition of the longer ranged Lockheed Martin F-35C Joint Strike Fighter.

“If these carriers can’t do that first day lethal strike mission inside an A2/AD bubble, why are we paying $13 billion dollars for them?” asks Jerry Hendrix, director of the Defense Strategies and Assessments Program at the Center for a New American Security, during an interview with The National Interest. “There are people making that statement: ‘it’s not our job on day one’—they can say there are all these other missions—presence and show-the-flag—but if that’s where they fit, their price ought to be scaled to that.”

To justify the expense of the carrier, and to keep them relevant, the U.S. Navy needs to revamp the composition of the carrier air wing so that it can participate in countering anti-access/area denial bubbles on the first day of combat, Hendrix said. The Navy must develop a new, long-range, unmanned strike aircraft that can counter those emerging threats, “Otherwise, what’s the point?” Hendrix asked. “If you’re not willing to make the shift in investment to have an asset that can do long-range strike from the carrier, perhaps we need to look at investing elsewhere.”

Bryan McGrath, managing director of the naval consultancy FerryBridge Group, agreed with Hendrix. “The case for the carrier will suffer if the Navy drags its feet on what comes next in the air wing,” he told The National Interest—also advocating for the development of a new carrier-based long-range unmanned strike aircraft. “Always remember—the carrier doesn’t care what it launches and recovers. It is just a floating airport. The air wing is the key. Get the air wing wrong—or continue to—and yes, the CVN investment makes less sense.”

While many within senior Navy leadership know and understand the problem—the protracted and expensive development of the Lockheed Martin F-35 has left the Navy gun-shy. “The plain truth is that the F-35 acquisition has negatively reinforced learned behavior in naval aviation acquisition. There is real fear in what you hear acquisition officials saying in why they want to slow-roll UCLASS into a tanker/ISR [intelligence, surveillance and reconnaissance] platform rather than a rangy, semi-stealthy, striker,” McGrath said. “Of course the tanking and the ISR are important…  But they are additive to what is already in the Joint architecture. What the Joint architecture lacks is mobile, semi-stealthy, long-range strike. Utterly lacks it. But the technical challenges are judged to be more difficult than those associated with an ISR/Tanker bird, and there is no appetite or stomach—or any other appropriate noun—within the acquisition community to take on tough technical challenges.”

Not only has the F-35 experience scared the Navy away from developing an unmanned strike aircraft, it is also one of the major factors behind the sea service’s vision for a scaled-down F/A-XX that is little more than a ‘super’ Super Hornet. “They’ve been burned by F-35, and no one wants to get burned again. But this is exactly the wrong lesson to be taken from F-35,” McGrath said. “What should be taken from F-35 is how difficult it is to create a ‘one-size-fits all’ solution to a great variety of missions and conditions. We can, should, and must design and build a largely unmanned semi-stealthy long-range carrier strike aircraft purpose built for carrier aviation.”

However, if the Navy doesn’t embark on developing a long-range penetrating strike aircraft, at a bare minimum, the service needs a stealthy new air-launched cruise missile—ideally with supersonic terminal speeds—with a range of more than 500 nautical miles. That missile would have to fit onto pylons underneath either the Super Hornet or the F-35C—which would carry the weapon the first 600 or so miles before releasing it.  However, the problem would still be targeting. But Hendrix and McGrath also noted that the carrier needs an organic tanker to refuel those jets while they are enroute. “It should have 30,000 lbs of give,” Hendrix said “But it must be able give at least as much as the KA-6 (26,000 lbs).”

Indeed, if the U.S. Navy is adamant that its carriers will no longer play a role on the first day of war against a near-peer threat, then there is no justification for the cost of the $13 billion Ford-class carrier, Hendrix said. One potential alternative would be to scrap new the Ford-class design and return to the much less costly Nimitz-class design—the last and most expensive of which—USS George H.W. Bush (CVN-77)—cost about half as much as the future USS Gerald R. Ford (CVN-78), Hendrix suggested. Another alternative could be a smaller carrier design—perhaps about the size of the 60,000-ton Forrestal-class—with fewer catapults and other costly features. “We could build a carrier custom-fit for 70 aircraft,” Hendrix said—noting that the 100,000-ton displacement Nimitz and Ford designs were built for a larger air wing of more than 90 aircraft.

Yet another alternative is to stop building aircraft carriers and focus on building additional submarines—which are extremely stealthy and operate with all but impunity, Hendrix said. The Navy could buy two Ohio Replacement Program (ORP) ballistic missile submarines or four Virginia-class attack submarines for the price of a single Ford-class. That would address the Navy’s pressing need to replace the Ohio-class ballistic missile boomers and start to address the attack submarine shortfall much more quickly and without breaking the bank. Moreover, given the that future attack submarines will add the Virginia Payload Module, which would allow the vessels to carry 40 Tomahawk cruise missiles, those vessels are expected to deliver an enormous punch.

However, Hendrix suggested buying double the number of ORP submarines in block buys with half configured to as SSGNs—or cruise missile carriers. With 16 missile tubes that could each carry seven Tomahawks in multiple all-up-round canisters (MAC), each ORP could carry 112 cruise missiles. “If the carrier air wing cannot do precision strike from range on the first day of war, those SSGNs could bring that precision strike to bear,” Hendrix said.