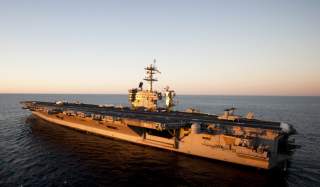 The Navy may change the size, shape, technological configuration and mission characteristics of its aircraft carriers in the future after careful study of the emerging global threat environment, senior service officials said.

Senior Navy officials are now assessing and finalizing the initial results of coordinated, long-term analysis on the future of aircraft carriers designed, among other things, to explore whether alternative configurations, engineering models, shapes, sizes and technologies were needed to address anticipated future threats to the platforms.

A senior official did not specify the results of the study but did say they would be available soon.

"We are getting ready to brief Congress on our findings," a senior Navy official told Scout Warrior.

Many by now are familiar with ongoing debates about whether aircraft carriers themselves could soon become obsolete with the advent of longer-range, precision-guided anti-ship missiles and next-generation hypersonic attack weapons.

The Navy may consider alternative aircraft carrier configurations in coming years as it prepares for its new high-tech, next-generation carrier to become operational later this year, service officials have said.

Although no particular plans have been solidified or announced, it seems possible that these future carriers could be engineered with greater high-tech sensors and ship defenses, greater speed and maneuverability to avoid enemy fire and configurations which allow for more drones to launch from the deck of the ship. They could be smaller and more manueverable with drones and longer-range precision weapons, analysts have speculated.

At the same time, it is possible that the Ford-Class carrier could be adjusted to evolve as technologies mature, in order to accommodate some of the concerns about emerging enemy threats. Navy engineers have designed the Ford-Class platform with this ability to adapt in mind. As a result of the unfolding trajectory of carrier technologies and other defensive weapons, many senior leaders have been clear that future carriers will indeed be able to operate in extremely high-threat environments.

In particular, the Chief of Naval Operations, Adm. John Richardson, recently told The National Interest that Russian and Chinese weapons will not keep carriers at bay.

Also, given evolving ship defense technologies such as radar, lasers, fire-control improvements, aerial sensors, electronic warfare and other systems, the study may recommend that the existing configuration of the Ford Class carriers remain fundamentally unchanged. Carriers also travel in "carrier groups" with nearby well-armed cruisers and destroyers designed, at least in part, to defend carriers from enemy attack.

Once its delivered, the new carrier will go through “shock trials” wherein its stability is tested in a variety of maritime conditions such as its ability to withstand nearby explosions; the ship will also go through a pre-deployment process known as “post-shakedown availability” designed to further prepare the ship for deployment.

Although no particular plans have been solidified or announced, it seems possible that these future carriers could be engineered with greater high-tech sensors and ship defenses, greater speed and manueverability to avoid enemy fire and configurations which allow for more drones to launch from the deck of the ship. They could be smaller and more manueverable with drones and longer-range precision weapons, analysts have speculated. At the same time, it is possible that the Ford-Class carrier could be adjusted to evolve as technologies mature, in order to accommodate some of the concerns about emerging enemy threats. Navy engineers have designed the Ford-Class platform with this ability to adapt in mind.

The Navy plans to build Ford-class carriers for at least 50-years as a way to replace the existing Nimitz-class carriers on a one-for-one basis. This schedule will bring the Ford carriers service-life well into the next century and serve all the way until at least 2110, Navy leaders have said.

Regarding the potential evaluation of alternatives to carriers, some analysts have raised the question of whether emerging technologies and weapons systems able to attack carriers at increasingly longer distances make the platforms more vulnerable and therefore less significant in a potential future combat environment. Some have raised the prospect of having faster, more agile smaller carriers better able to maneuver away from enemy fire and potentially launch more drones; equipping carriers with additional ship defensive technologies or missile interceptors is also an option being discussed.

For example, a think tank study from the Center for New American Security says the future threat environment will most likely substantially challenge the primacy or superiority of U.S. Navy carriers.

A principle element of this strategy includes backing carrier off to a range that carrier-launched fighter aircraft cannot reach.

The U.S.-China Economic and Security Review Commission, a Congressional panel of experts, published a detailed report in 2014 on the state of Chinese military modernization. The report cites the DF-21D along with numerous other Chinese technologies and weapons. The DF-21D is a weapon referred to as a "carrier killer." The Chinese are also reported to be working on a more lethal follow-on precision-guided anti-ship missile, The National Interest reports.

However, as reported in "The National Interest" by Dave Majumdar, senior Navy leaders are developing additional defensive strategies aimed at countering the DF-21D threat. Furthermore, they maintain that credible long-range threats posed by the Chinese missile assumes that China can successfully integrate the requisite ISR and targeting technologies sufficient to strike carriers on-the-move.

The Air Force Chief Scientist recently told Scout Warrior that the US expects to have operational hypersonic missiles by the 2020s.

While China presents a particular threat in the Asia Pacific theater, they are by no means the only potential threat in today's fast-changing global environment. A wide array of potential future adversaries are increasingly likey to acquire next-generation weapons, sensors and technologies.