The U.S. Navy is Preparing the MQ-4C Triton Drone for Service in the Pacific 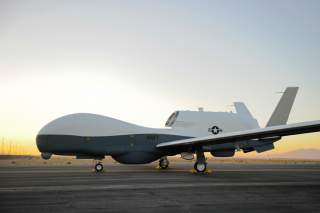 The Navy announced that next generation aircraft avoidance systems will be installed on its new high-tech maritime surveillance drone.

Northrop Grumman has received a $9.6 contract to install the Automatic Response Module of the Airborne Collision Avoidance System X into the MQ-4C Triton’s avionics system.

The company will test and support the software and ensure the proper functioning of the unmanned aircraft.

Equipped with signals intelligence, C4ISR, and maritime strike capabilities, the Triton represents the Navy’s future in unmanned aircraft technology. It will also complement the P-8 Poseidon. Together, the two aircraft replace the aging P-3C Orion.

Specs include a full day’s worth of flight, an altitude limit over 10 miles, and an operational range of 8,200 nautical miles. The Navy’s program of record states that the service will field 68 aircraft.

USNI News profiled the Triton’s initial roll out in October. The aircraft will be a member of Unmanned Patrol Squadron 19, the Navy’s first fully-unmanned squadron. Navy pilots will train on the drones for two years with a tentative deployment date of 2018.

Work will be performed in Rancho Bernardo, California, and should be completed by December 2017. The Navy obligated $2.5 million at the time of award. The Naval Air Systems Command along the Patuxent River in Maryland is the contracting activity.

In addition to being stationed in Guam, Tritons will also be based in the eastern and western U.S., a location in the Middle East and in Sicily, Italy, Navy leaders said.

The Triton UAS is an intelligence, surveillance, reconnaissance drone with specially configured maritime sensors and radar systems.  The 45 foot-long, 32,000-pound aircraft has a wingspan of 131 feet.

The Navy has tested the drone at Edwards Air Force Base in Palmdale, Calif. The MQ-4Cs airframe is based on the Global Hawk except that it has been tailored to function in a maritime environment, Navy developers have explained.

For instance, the Triton is built with a thicker, more stiffened wing compared to the Global Hawk to enable the aircraft to rapidly change altitude in adverse or icy weather conditions, he added.

The Navy also separately tested the Triton's software and sensor systems by flying them in a surrogate Gulfstream 2 airplane.

The Triton's electronics include an electro-optical/infrared sensor, a 360-degree active electronically scanned array radar and inverse synthetic aperture radar, among other things, Navy developers have said.

The sensor package being designed for the aircraft included what the Navy calls a multi-function array sensor, or MFAS, a sensor system specially configured to function in a maritime environment, Northrop and Navy developers have said.

The Triton is designed to bring endurance, altitude, range and persistent stare ability; it can stay on missions for over 24 hours at altitudes greater than 50,000 feet, Navy developers explained.

The Triton can cover more than 200 square miles out on the ocean in a single mission. The idea is to provide ship commanders with an ability to detect and see targets, threats and items of interest in real time from great distances using the sensors, cameras and data-links of the Triton system.