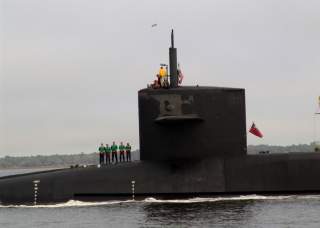 The US Navy is test-firing and upgrading its arsenal of Trident II D5 nuclear-armed submarine launched missiles designed to keep international peace -- by ensuring and undersea-fired second-strike ability in the event of a catastrophic nuclear first strike on the US.

Firing from the Atlantic Ocean off the coast of Florida Aug. 31, a specially configured non-armed “test” version of the missile was fired from the Navy’s USS Maryland. This was the 161st successful Trident II launch since design completion in 1989.

The U.S. and UK are collaboratively working on a common missile compartment for their next generation SSBNs, or ballistic missile submarines.

The "Bulletin of the Atomic Scientists" futher describes the weapon -- "The Trident D5s carry three types of warheads: the 100-kiloton W76/Mk-4, the 100-kiloton W76-1/Mk-4A, and the 455-kiloton W88/Mk-5 warhead, the highest-yield ballistic missile warhead in the U.S. arsenal."

The Trident II D5, first fired in the 1990s, is an upgraded version of the 1970s-era Trident I nuclear weapon; the Trident II D5s were initially engineered to serve until 2027, however an ongoing series of upgrades are now working to extend its service life.

The Navy is modernizing its arsenal of Trident II D5 nuclear missiles in order to ensure their service life can extend for 25 more years aboard the Navy’s nuclear ballistic missile submarine fleet, service leaders said.

“Sustaining and modernizing the nuclear enterprise infrastructure is crucial to maintaining a strong, credible and flexible nuclear deterrent, which is essential to our national security and the security of United States’ allies and partners,” Adm. Cecil D. Haney, U.S. Strategic Command commander said in a written statement.

The missiles are also being planned as the baseline weapon for the Ohio Replacement Program ballistic missile submarine, a platform slated to serve well into the 2080s, so the Navy wants to extend the service life of the Trident II D5 missiles to ensure mission success in future decades.

The Navy has been working on technical upgrades to the existing Trident II D 5 in order to prevent obsolescence and ensure the missile system remains viable for the next several decades.

Engineers have modernized the guidance system by replacing two key components due to obsolescence – the inertial measurement unit and the electronics assembly, Benedict said.

Under the U.S.-Russia New START treaty signed in 2010, roughly 70-percent of the U.S.’ nuclear warheads will be deployed on submarines.

Within the last several years, the Navy has acquired an additional 108 Trident II D 5 missiles in order to strengthen the inventory for testing and further technological development.

Benedict said the Mk-5 re-entry body has more yield than a Mk-4 re-entry body, adding that more detail on the differences was not publically available.