The U.S. Navy Is Trying to Track Down ‘Carrier-Killer’ Russian Nuclear Submarines in Mediterranean 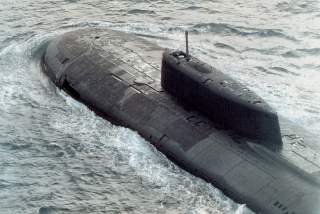 U.S. Navy and NATO force are attempting to track down one—possibly two—Russian nuclear powered submarines in the Mediterranean. At least one of the submarines is thought to be a Project 949A Antey—perhaps better known by its NATO codename Oscar II—guided missile submarine.

According to David Cenciotti—who founded The Aviationist blog—a number of U.S. Navy and NATO maritime patrol aircraft including Boeing P-8 Poseidon are trying to track down the Russian vessels. “What makes the news even more interesting is the fact that the Russian Navy submarine would be an Oscar II Class, that is to say a ‘carrier killer’ sub, designed with the primary mission of countering aircraft carrier battlegroups. Among the NATO vessels in proximity of the Oscar II there is also the French Charles De Gaulle nuclear-powered aircraft carrier and the USS Eisenhower is not too far away either,” Cenciotti writes. “Therefore a massive Cold War-style hide-and-seek in underway, keeping both sides quite busy.”

The 19,400 tons Oscar II—which is armed with 24 P-700 Granit supersonic sea-skimming anti-ship missiles—was specifically designed by the Soviet Union to hunt down and destroy U.S. Navy carrier strike group. The Oscars II are among the quieter boats among the Russian Navy’s nuclear-powered submarine fleet. Even without their formidable missile armament, the submarines are among the few enemies that can actually sink one of the U.S. Navy’s nuclear-powered aircraft carriers. “A torpedo properly placed under the right part of the keel is one of the few things that can actually flat out sink an aircraft carrier,” retired U.S. Navy Capt. Jerry Hendrix, director of the Defense Strategies and Assessments Program at the Center for a New American Security—and probable future undersecretary of the Navy—told me earlier this year.

There are originally 11 Project 949A boats that were completed. While one—Kursk—was lost with all hand aboard, it is unclear how many of the remaining boats are currently operational. There could be as few as five Oscar IIs that are currently active. But Russia plans to upgrade the surviving Oscar IIs into a new Project 949AM configuration and keep the boats in service into the 2030s. The modernized Anteys could carry as many as 72 cruise missiles including a mix of P-800 Oniks and Kaliber-NK missiles—affording Moscow a huge long-range punch.

If Cenciotti’s report is correct, the presence of Russian submarines is illustrative of Vice Adm. James Foggo—then commander of the U.S. Navy’s 6th Fleet, Joint Force Maritime Component Commander Europe and NATO’s Naval Striking and Support Forces NATO—contention that the Moscow’s undersea force is resurgent in the North Atlantic and European theatres. “If you look across the design of the Russian Federation Navy, where they have put their resources and their research and development efforts has primarily been in the undersea domain and in the submarine force,” Foggo told The National Interest earlier this year.