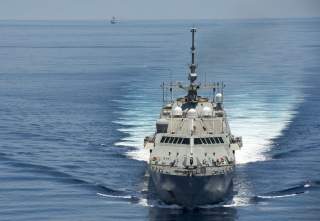 The U.S. Navy conceived of the new Littoral Combat Ship in the late 1990s, envisioning a small, inexpensive, flexible, near-shore surface combatant capable of fighting independently and quickly switching roles by swapping out “modules,” each containing different weapons and sensors.

Many outside observers were skeptical. And experience proved them right.

By the time production began in 2005, the LCS had grown into a $500-million, 3,000-ton-displacement ship that was hardly cheap or small — and yet lacked the sensors, weaponry and armor to survive in contested coastal waters.

And “modularity” was turning out to be a farce. Some of the modules simply didn’t work. Others ran over-budget or proved too unwieldy to quickly install.

It took another nine years for the Navy to come around to critics’ way of thinking. By then, no fewer than 18 LCSs of two subvariants — slighly less than half of the planned fleet — were already in service or production at two shipyards. In February 2014, then-Secretary of Defense Chuck Hagel announced that the Navy would cut production of the baseline LCSs from 52 to 32 and study a new frigate design to replace the cancelled LCSs.

The Navy’s frigate task force considered a wide range of options, including modified versions of the LCS plus several domestic and foreign frigate designs. Perhaps most notably, the task force took a hard look at a militarized version of the U.S. Coast Guard’s robust, efficient National Security Cutter.

But when the Navy completed its frigate study in November 2014, its recommendation — which Hagel quickly approved — was to simply add a few pieces of additional equipment to the existing LCS variants and remove their modularity capability.

The planned enhancements included a more powerful air-search radar, an over-the-horizon anti-ship missile, a small amount of additional armor, improved electronic jamming, a towed-array sonar and an anti-submarine torpedo launcher — all things the baseline LCSs lacked. But the new frigate version of the littoral warship would not get a long-range surface-to-air missile system nor significant hardening against enemy attack.

In short, the frigate was little more than a “minor-modified LCS,” according to the Government Accountability Office, the U.S. government’s main watchdog agency which, in June 2016, released a scathing report on the Navy and Defense Department’s decision-making processes regarding the frigate.

In the GAO’s assessment, the Navy’s main concern was selecting a frigate quickly and building it at the same yards building the baseline LCSs, so as to protect the shipbuilders Lockheed Martin and Austal — and, in theory, minimize the additional cost. The Navy expects the frigate to cost around $190 million more per copy than the roughly $500-million baseline LCS.

“In making its recommendation, the Navy prioritized cost and schedule considerations over the fact that a minor-modified LCS was the least capable option considered,” the GAO reported. “However, certain cost assumptions made by the task force may have overstated the minor modified LCS’s relative affordability as compared to other options. The Navy’s decision was also based on a desire to start production of the first frigate in 2019, and without a break in production at the LCS shipyards.”

The Navy’s insistence on selecting a frigate design quickly dictated that the sailing branch skip many of the Pentagon’s typical acquisitions procedures. “There are no current plans for official [Department of Defense] milestone reviews of the frigate program, which is a major acquisition program based on its anticipated costs,” the GAO explained.

“In addition, the Navy does not plan to develop key frigate program documents or to reflect frigate cost, schedule and performance information in the annual Selected Acquisition Reports submitted to Congress. Without adequate oversight, federal funds may not be effectively spent.”

For one, the Navy plans to award contracts for frigate construction before it completes a study to determine whether the LCS seaframes can actually accommodate the planned new equipment that transforms a baseline LCS into a frigate. Moreover, frigate construction will be well underway by the time the Navy tests the design in realistic conditions.

Building before or during testing — a practice the Pentagon calls “concurrency” — is one of the practices that drove up the cost of the F-35 Joint Strike Fighter. In 2012, Frank Kendall, then the Pentagon’s top weapons-tester, said concurrency was tantamount to “acquisitions malpractice.”

If the military experience with the F-35 is any guide, then the frigate could turn out to be much more expensive than the Navy is currently estimating. “As the Navy pivots from LCS to the frigate program, which is estimated to cost more than $8 billion for ship construction alone, its approach would require Congress to appropriate funding with key unknowns,” the GAO warned.

The watchdog’s agency recommendation is clear. The Navy should slow down its pursuit of a new frigate. And if the sailing branch won’t slow down on its own, lawmakers should force it to do so by withholding funding. “Congress should consider not funding any requested LCS in fiscal year 2017 and should consider requiring the Navy to revise its acquisition strategy for the frigate,” the GAO advised.