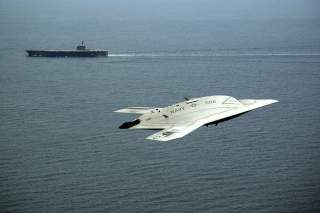 Navy Secretary Ray Mabus really likes drones. He now has a whole deputy assistant secretariat for them. In contrast to the U.S. Air Force, his people aren’t yet burned out from operating them around the clock for over a decade. This April Fool’s Day even brought the annual joke about another aerial demonstration team—this time the Blue Angels—going unmanned. Except that if Cirque de Soleil can do it already, maybe the idea just isn’t that far-fetched. For those X-47B UCAS-Ds—Unmanned Combat Air System Demonstrators—bought from Northrop Grumman have been taking off from carriers, landing on carriers, and refueling from 707s. That bodes well for the forthcoming UCLASS—Unmanned Carrier-Launched Airborne Surveillance and Strike—competition. But for all that the secretary likes those drones from Northrop, further tests and evaluations of the airplane will proceed judiciously, so as not to give “the people that made UCAS a huge advantage over what the next iteration is.” And that may be a mistake.

For background, the UCLASS competition is intended to provide each carrier with a squadron of long-endurance drones for scouting out and bombing things hundreds of miles away. Four companies will bid: Northrop Grumman with a further development of that X-47B 'Iron Raven' (excellent), Lockheed Martin with its Sea Ghost, Boeing with its Phantom Ray, and General Atomics with its Sea Avenger. As I wrote last August on Real Clear Defense, “that structure is a long way from the monopolization of the [combat aircraft] business that Lockheed Martin was presumed to have inherited by winning the Joint Strike Fighter contract some thirteen years ago.” Now, however, the SecNav is concerned that Northrop may have an advantage from the past four years of flight testing with the Navy.

Of course it does. Lockheed has an advantage in stealth aircraft design and manufacturing from its past 18 years of building F-22s and F-35s. Boeing has an advantage in naval aircraft as the producer of most of the world’s currently serving carrier-based fighters. General Atomics Aeronautical has an advantage in drones from having focused almost solely for the past 20 years on designing and building Predators and Reapers. Every incumbent brings inalienable advantages to the next competition. For as Mark Lorell and Hugh Levaux wrote in their seminal study The Cutting Edge: A Half Century of U.S. Fighter Aircraft R&D (RAND, 1998), “experience matters, because of the tendency to specialize and thus to develop system-specific expertise.”

But they also wrote that “the most dramatic innovations and breakthroughs came from secondary or marginal players trying to compete with the industry leaders.” Depending on one’s perspective, that might be a description today of General Atomics, with its focus on relatively low-performance aircraft, or Boeing, with its relative limited track record in operational drones. Secondary and marginal really don't describe Lockheed Martin in any way, but that just confirms that the company is an under-dog to no one in combat aircraft competitions. The beauty of the UCLASS program is that it will pit four rather dissimilar organizations against one another for a most prestigious contract.

(Recommended: Are Submarines the New 'Battleship'?)

The value of that competition, though, should accrue to the Navy Department. Evenhandedness is a laudable ethical goal in public procurement, but its first benefit is to draw out higher quality and lower prices from competitors. Continuing a most vigorous operational testing program with the X-47B is important so that the Navy can amass and assimilate early learnings of how to operate drones from carriers. Northrop Grumman would probably learn more through that process than any of its competitors, but those learnings will not impair in any absolute sense the value of the aircraft that the others will present. The Navy cannot lose in that effort—unless it consciously chooses fairness over the needs of national defense.

James Hasík is a senior fellow at the Brent Scowcoft Center on International Security at the Atlantic Council, where this first appeared.