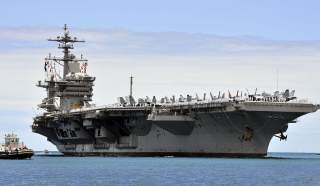 President Donald Trump wants to expand the United States Navy and unveiled plans to expand the service’s aircraft carrier fleet to 12 ships. But the Trump administration will face challenges in reaching that goal.

“I just spoke with Navy and industry leaders and have discussed my plans to undertake a major expansion of our entire Navy fleet, including having the 12-carrier Navy we need,” Trump said, speaking at Huntington Ingalls’ Newport News shipyard. “We also need more aircraft, modernized capabilities, and greater force levels.”

Naval experts agree that the service must expand to meet its worldwide responsibilities, but said the Trump administration faces a difficult path ahead. "The President's call for a 12 carrier Navy is part of an ambitious and necessary plan to grow the Navy,” Bryan McGrath, managing director of the FerryBridge Group naval consultancy. “Getting there is going to be a slog, with so many competing priorities, an OMB [Office of Management and Budget] Director openly hostile to defense spending, and the BCA [Budget Control Act] still in force. The President must remain steadfast in his support, and he must appoint people to civilian leadership in the Navy who understand the application of seapower and who can translate that understanding into powerful, political advocacy. Without it, the 12 carrier/350 ship Navy is fantasy."

Author Robert O’Brien—who has been touted as Trump’s potential pick for Secretary of the Navy—said that he fully supports a 12-carrier Navy. Carriers, O’Brien said, are critical to U.S. power projection capabilities. “The U.S. has global responsibilities,” O’Brien said. “The carrier strike groups are the backbone of the fleet. We have to be able to deploy those strike groups around the world for presence and also to deter our adversaries.”

O’Brien noted that in 2016, the Navy, for the first time in years, was unable to maintain a carrier presence in the Persian Gulf to support combat operations against the ISIS terrorist group. “That’s unacceptable given the international commitments we have and given that we’re engaged in combat in Afghanistan and Iraq and other places,” O’Brien said. “The Navy has to be able to deploy a sufficient number of carriers to meet the needs of our warfighters.”

More generally, the Navy will have to expand its fleet to include more submarines and surface ships. Late last year, Jerry Hendrix, a senior analyst the Center for a New American Security—often touted as a potential candidate for undersecretary of the Navy—suggested that the service needs as many as 40 frigates and 70 attack submarines as part of its buildup.

“Frigates, smaller, cheaper and of a more lethal design than the current Littoral Combat Ship, something more analogous to those built by our European allies perhaps, should be bought in large numbers to provide increased naval presence patrols. Presence, the importance of being there, often with very basic, low-end ships that are backed up by the threat of high-end ships, is often enough to uphold American interests,” Hendrix wrote. “Lastly, the nation needs more fast attack submarines and more guided missile submarines.  Today we have just shy of 60 of these quiet, stealthy platforms, but this number will fall far into the 40s during the 2020s before beginning to rise again in the 2030s. In the end we will need more than 70 of these boats to protect our interests.”

As a maritime nation, for the United States, keeping the sea-lanes is extremely important. “We’re a commercial republic,” O’Brien said. “Our fleet has to be sufficient to keep the sea-lanes open. We have to have presence around the world and we have to have a naval strike capability that allows us to defeat our foes.”