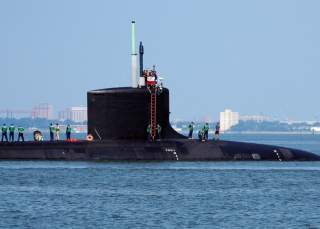 The U.S. Navy hopes to continue to build two Virginia-class attack submarines per year while also building the Ohio Replacement Program ballistic missile submarine starting in 2021. But does the United States still have the industrial capacity to build more than two nuclear submarines at a time?

The increased build rate would help to alleviate a severe shortfall in the number of available attack submarines in the Navy’s inventory—which is set to drip to 41 boats by 2029. But moreover, with the growing threat from a resurgent Russia and an increasingly hostile China, the service is recalibrating its stated requirement for 48 attack submarines.

It has become clear that the service needs more than 48 attack submarines. Even with 52 boats currently in service—four more than the stated requirement—the Navy is not able to meet the worldwide demand for submarine capability.  “We have a compelling need for additional attack submarines,” Sean Stackley, assistant secretary of the Navy for research, development and acquisition told the Congress in late February. “Today, we have 52 boats, a requirement for 48, we have a valley of 41 boats in the 2030s, we start falling below the line in the late 2020s.”

The Navy is working on reducing the costs of the Ohio Replacement Program to pay for an additional Virginia-class boat when the new ballistic missile submarine enters production in 2021. “We’ve got to nail down what it’s going to cost to add a second Virginia in 2021 in POM 18. We’ve got to come to grips with that funding requirement, because it’s going to come out of somewhere else,” Stackley told the Senate on April 6. The service hopes to maintain a build rate of two Virginia-class boats thereafter until the future SSN(X) enters production in the mid-2030s.

The problem, however, is that one ORP and two Virginia-class boats is the equivalent of building four attack submarines—each boomer is more than twice the size of an SSN. Indeed, the question of if industry can handle the massive volume of work has come up. One also has to take into account the fact that the new Block V Virginia-class submarines are going to be fitted with a new module that increases their capacity to 40 Tomahawk cruise missiles. With the length of the boat increasing by 83-feet and displacement rising from 7,833-tons to 10,177-tons, the newer Virginia-class boats require much more work. That means the amount of throughput is essentially doubling. Can industry rise to the challenge?

The answer from both the Navy and industry is: Yes. The Navy is developing a plan called the Submarine Unified Build Strategy (SUBS) to spread the work between General Dynamics Electric Boat and Huntington Ingalls Industries Newport News Shipbuilding intelligently. Once the Ohio Replacement Program starts being built, Electric Boat will deliver all twelve boomers while Newport News will deliver the majority of the Virginia-class boats. “We know with pretty high confidence they can handle two per year with Ohio Replacement,” Capt. Michael Stevens, Naval Sea Systems Command’s program manager for the Virginia-class told an audience at the Navy League’s Sea, Air and Space symposium on May 17. “But we’ll have to do some facilitization and, of course, hire people.”

Industry is also confident that it can handle the workload. “We feel pretty comfortable that we’ll be in a position to handle that,” said Will Lennon, Electric Boat’s vice president of engineering and design programs in an interview with The National Interest. However, both Electric Boat and Newport News will have to grow their facilities and hire more people to handle the enormous task—particularly during the 2020s. “We’re looking at what it would take to scale up to be able to handle additional Virginias during the time of Ohio Replacement,” Lennon said. “So adding the second ship in ’21 is really not a big impact to us. It changes the phasing of our facility expansion, but it doesn’t increase the number of facilities we have to have.”

But what if the Navy revises its requirements to a level such that production must be further increased? It might be possible to increase production beyond even three submarines per year. Stevens pointed out that during the 1980s, the United States was producing four attack submarines and two Ohio-class boomers at one point. “There is history that suggests we could build a lot more,” Stevens said. “But that would require more investment.”

Indeed, for much of the 20th Century until the end of the Cold War, the United States would produce many more submarines per year than it does now. However, when the Cold War ended in 1989 and the subsequent collapse of the Soviet Union in 1991, submarine construction essentially came to a halt. The Navy had intended to replace its Los Angeles-class attack submarines with the powerful new Seawolf-class, which was designed specifically to hunt a new generation of advanced Soviet designs like the Project 941 Akula—which are better known by their NATO moniker as the Typhoon-class. But with the Soviet threat all but evaporating, the Navy terminated the Seawolf-class after only three boats in favor of the cheaper Virginia-class. But there was not an insignificant gap between the last Los Angeles-class boats, the three Seawolves and the new Virginia-class boats.

Effectively, the Navy took a holiday from building new submarines during the 1990s—only a handful of boats were built while many more submarines were retired. The result was not only a precipitous drop in the number of active submarines in the fleet but also in the industrial base that builds those vessels. “We shrank our footprint, we closed a lot of our manufacturing facilities, we shrunk down to a modest size,” Lennon said. “Concurrently, the industrial base did contract. Where in the ‘70s and ‘80s we would have multiple suppliers for any given component or commodity, that industrial base contracted down to—in many cases—sole sources.”

The diminished industrial base is one of the potential roadblocks to increasing production to three boats. Electric Boat is working with its vendor base to make sure that they can support the jump to one ORP and two Virginia-class boats per year. “Now as we look at this growth back up...we need to look at the industrial base to make sure they have the capacity necessary to support this increased production rate,” Lennon said. “We’re working very closely with the vendor base right now in doing assessments to determine where their capacity is, where we need to increase it—or—for just capacity’s sake—where we want to increase it in order to promote competition again.”

For the immediate future, Electric Boat is simply trying to make sure it can sustain building two Virginia-class boats per year during ORP construction. “To go beyond that we’d have to go do some additional research,” Lennon said. “We may have to expand our facility some, but the capacity is there—it’s a matter of understanding the need.”

Electric Boat and Newport News would need some lead time to understand the problem, get their facilities into gear and train enough workers for the job—but there is enough industrial capacity to build more than three submarines in America’s two nuclear-capable shipyards. The Rhode Island government has been very supportive in its efforts to develop a skilled talent pool for Electric Boat, Lennon said. They have also been very helpful in helping the company with extending its lease on its Quonset Point facility. Connecticut—which is where another Electric Boat facility is located—has also been very cooperative with establishing a training pipeline in the form of good trade schools. “They’ve been great,” Lennon said—which means there is an available talent pool to draw upon. The real question is funding.

Congressman Joe Courtney (D-CT), ranking member of the House Armed Services Committee’s Seapower and Projection Forces subcommittee, said in an interview with The National Interest that the ORP will be built, but it has be built without wrecking the rest of the Navy’s shipbuilding budget. “The Ohio Replacement Program—given where it stands in the food chain—I think it’s going to be built no matter what,” Courtney said. “It’s pretty much chiseled in stone. The question is how can we do it in an affordable way and how can we do it without suffocating the rest of the shipbuilding account.”

Courtney’s solution—which he has pushed through working alongside Seapower and Projection Forces subcommittee chairman Rep. Randy Forbes (R-VA)—is the National Sea-Based Deterrence Fund. “It’s been on the books now for two years, it’s withstood every legislative assault,” Courtney said. “But the Congressional Budget Office and the Congressional Research Service analysis was very positive in terms of the fund’s authorities in terms of saving money—they calculated about $10 billion in savings because of the multiyear procurement.”

Besides the fund, there is a possibility that the Congress will appropriate a larger share of the defense budget to the Navy as the maritime threat continues to grow. “The Navy is now doing a force assessment,” Courtney said. “When that report comes out, we’re not going to be looking at a 308-ship Navy, I think we’re going to be looking at closer to a 350-ship Navy in terms of the recommendation. At the end of the day, I actually think the pie chart for the Pentagon’s budget is going to have to enlarge the Navy’s share of the spending.”