The US Navy's Great Littoral Combat Ship Reboot Is Here 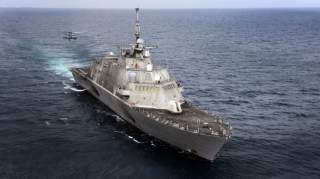 The United States Navy is completely revamping how it will operate its fleet of Littoral Combat Ships (LCS).

The small, relatively low cost, frigate-sized LCS vessels were originally envisioned as modular, reconfigurable ships that could conduct a variety of missions depending on how they were outfitted. However, under the Navy’s new operating concept, the ships will be effectively be configured permanently for specific missions—anti-surface warfare (ASUW), anti-submarine warfare (ASW) and mine countermeasures (MCM). But while the Navy is changing how it will operate its LCS ships, the service needs the relatively diminutive vessels to maintain its presence around the globe.

On Feb. 29, 2016, chief of naval operations Adm. Richard Johnson and assistant secretary of the Navy for research, development and acquisition Sean Stackley directed the Navy to review the LCS program from top-to-bottom to ensure that the effort was on track. “Our core focus was to maximize forward operational availability, while looking for ways to increase simplicity, stability and ownership,” said Vice Adm. Tom Rowden, commander of Naval Surface Forces—who was tasked to complete the review. “It became clear the LCS crewing construct is the variable that most impacts the other factors such as manning, training, maintenance and—most importantly— operations forward.”

Thus, as a result of Rowden’s review of the LCS program, the Navy will move to a new “Blue/Gold Plus” crewing concept—which is similar to the system used onboard the service’s nuclear-powered submarine fleet. Under the new plan, the first four LCS ships —two Lockheed Martin Freedom-class mono-hulls and two General Dynamics Independence-class trimarans—will be converted into operational test vessels. However, they will remain available for deployment should the need arise, Rowden said at small briefing held at the Pentagon on Sept. 8. The remaining 24 vessels will be part of the training and operational fleet.

Overall, though the Defense Department has ordered the LCS program truncated to 40 vessels, the Navy still has a standing requirement for 52 LCS ships and 64 mission modules, Rowden said. However, the number of mission modules might be adjusted as part of the service’s new operating concept, Rowden said.

Additionally, Rowden said that the entire LCS fleet might eventually be armed with a new over-the-horizon anti-ship missile. “The team is working its way through that,” Rowden said. “Under the concept of distributed lethality, I think it certainly makes sense for me, from my perspective as we look at distributing the force and distributing the lethality of that force—could I make an argument that it makes sense to put a long-range over-the-horizon missile on every single Littoral Combat Ship we have? Absolutely.”

The four LCS test vessels will be crewed with the most experienced LCS sailors to conduct operational testing on the ships’ mission modules as well as future upgrades. “The crews will be focused on the testing requirements for the program,” Rowden said. “One of the values of the modularity is that we can modernize the modules independent of the ships, test them independent of the operational ships and then, at the appropriate time, try and install those modernized modules.”

The remaining 24 LCS ships will be used for operational missions. San Diego will become home to a dozen Independence-class ships while Mayport, Fla., will become the main base for 12 Freedom-class vessels. Rowden said that the trimanans are being based in California because there is more room for those ships there.

The twelve ships units on each coast will be further broken down into the three divisions—each commanded by a commodore of the same rank as the commander of a missile cruiser—comprised of four vessels each, Rowden said. Each of those divisions will focused on a single mission—ASW, ASUW or MCM. That focus on a single mission—without having separate personnel for the mission module—will increase crew cohesion and increase the sailors’ sense of ownership of their vessels. “These 70 sailors are a combination of what was previously known as the ‘core’ crew and ‘mission module’ crew—one crew focused on one mission,” Rowden said.

Another change is in how the divisions are crewed and manned. One ship in every division will be designated as a training ship with a single crew that is comprised of experienced sailors focused on that particular LCS configuration’s mission. For example, a training ship for a LCS division configured for ASW would be experts on hunting submarines. Those experienced crews on the training ship would instruct and certify the crews of the remaining three ships in their division—each of which will have two rotating crews under the Blue/Gold structure.

Thus, when the three operational LCS vessels from each division deploys for between 16 and 24 months, the Blue and Gold crews will relieve their counterparts mid-tour. “The Blue and Gold crews—which will be rotating on those ships as they are forward—will be refitting and retraining at home front and going forward to relieve their Blue or their Gold counterparts,” Rowden said. “So for the deployable ships, they’ll be deployed a greater amount of time than they will be in refit.”

Rowden said that it will take the Navy about a year to implement the new LCS crew construct—but there are many details that have not been worked out just yet. Essentially, the Navy hopes to have the new system in place by 2018 for when the service hopes to start conducting LCS deployments in earnest. “We’ll be transitioning out over the next year or so,” Rowden said.