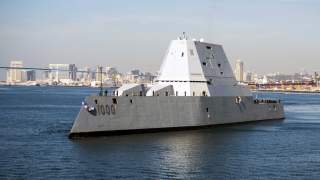 And then there’s the final element in Mahan’s formula: making a force big enough to take to the sea and duel the most lethal foe likely to appear on the scene. In its imperial heyday, Great Britain sought to field a Royal Navy equal in numbers to its deadliest likely opponent. In Britain’s case, that meant constructing a fleet able to defeat the combined fleets of Bourbon powers Spain and France. Meet that numerical standard, and London could count on seamanship, tactical virtuosity, and élan—traits at which Jack Tar excelled—to tip the balance in action. British statesmen viewed the human factor as a difference-maker favoring the Royal Navy.

That’s one way to define a force strong enough to take to the high seas and fight with reasonable prospects of success. The Trump administration must devise its own. I would add a coda to Mahan’s formula: if in doubt, it’s better to deploy a surplus of power than risk having an enemy expose a deficit at a very bad time. Calculations can be wrong, an enemy more determined or skillful than prewar projections indicate. Trying to calibrate a battle force with just enough ships, planes, and seafarers to win risks a dismal showing.

So, Washington, refuse to yield to just-in-time thinking. Better an excess than a deficiency of force when death is on the line.

Administration officials can apply Mahan’s fleet-sizing formula to likely trouble spots around the world. One hopes they will. For example, what does Russia want in the Eastern Mediterranean, how much does it want it, and how large a fraction of the Russian Navy is it prepared to send to get it? There’s a rough-and-ready benchmark for the numbers and capability of a rejuvenated U.S. Sixth Fleet.

Or look at the China seas. What does China want in, say, the South China Sea, how much does it covet its goals, and how large a share of the People’s Liberation Army Navy is Beijing prepared to commit to obtain those goals? And there’s another wrinkle in China’s case: “anti-access/area-denial” weaponry. PLA commanders can back up the fleet with an array of shore-based firepower.

A Fortress China able to lob missiles scores if not hundreds offshore or dispatch warplanes from coastal airfields could skew the Trump administration’s Mahanian calculus toward greater numbers in the Western Pacific. China’s navy, then, is not the sole benchmark for U.S. naval adequacy vis-à-vis China. The benchmark is China’s navy—plus whatever land-based implements of Chinese sea power sport enough range to reach the scene of combat.

These are the sorts of calculations the incoming leadership must venture as it makes maritime strategy and constructs a navy to execute that strategy. Is 350 ships the right number? Is it enough to fend off challenges to freedom of the sea, succor allies when war looms, and scour the seven seas of brigands and gunrunners—all missions entrusted to the naval services?

The answer probably depends on which 350—or 355 if the navy gets its way—ships the administration opts to build. Congress and the administration could simply scale up the existing fleet proportionally, yielding a U.S. Navy that’s a larger version of its current self. In other words, aircraft carriers, cruisers, destroyers, submarines, and other ship types would make up about the same shares of the fleet as at present.

Or, the administration could redirect shipbuilding to favor certain ship types over others. It could bulk up the submarine fleet, for instance. It could fill out the inventory with small surface combatants to save money—albeit at the cost of thinning out the fleet’s aggregate fighting power. And on and on.

Combat power constitutes the common denominator between wartime and peacetime maritime strategy. A basic insight should inform fleet design in the coming years—namely that a fleet needs to make an impression. Ships are political implements as well as engines of war. The U.S. Navy’s ability to sway important audiences in peacetime, amplifying U.S. political influence, depends on how these audiences see the navy’s prospects for winning in wartime.

The U.S. Navy burnishes its good name, consequently, by burnishing its martial prowess. Only by making important audiences believers in its prowess can the navy deter prospective foes, reassure wavering allies and friends, attract new partners, and hearten constituents back home. Numbers and capability sufficient to win in battle are just as important in peacetime—when whoever most observers estimate would have won in action “wins” a peacetime showdown.

A final caution. As the Trump administration comes into being, it will be natural to look back to the United States’ last Republican-led naval buildup as the gold standard. The Reagan administration committed itself to a 600-ship U.S. Navy during the late Cold War, and devised a maritime strategy that instructed the navy to carry the fight to the Soviet Union all around the Soviet maritime periphery.

A triumphal afterglow still surrounds that age for American mariners. That’s the danger. We remember the 600-ship navy as some omnipresent, world-beating force that could sweep the sea clear of all comers. But bear in mind that the 600-ship fleet was the middling option—not the ideal one from a strategic standpoint.

The Reagan administration, that is, split the difference between a smaller navy predestined to lose and a bigger navy musclebound enough to engage the Soviet Navy, confident of victory, in all likely contingencies. Navy leaders wanted an 800-ship navy to guarantee success. They settled for a 600-ship navy that, in Mahanian parlance, enjoyed reasonable chances of success in most contingencies. Success, then, was not foreordained even had the navy reached that 600-ship plateau. (It didn’t, quite.)

The 600-ship navy, consequently, comprises a cautionary tale as much as an example to strive toward.

That’s the trouble with magic numbers in strategy: they obscure as much as they reveal. Let’s not make 350 or 355 a magic number. Indeed, a 350-ship fleet remains on the lean side considering the slate of missions entrusted to the U.S. Navy, and considering that the navy’s theater of operations spans the entire globe. Trump’s figure could be too high, too low, or about right.

Once again, it depends on what he expects the navy to do.

Setting and enforcing priorities is central to the art of strategy. It keeps ambitious ends in sync with the means available to fulfill them. A U.S. Navy with more hulls in the inventory could stage more robust forces in far-flung regions in peacetime. Extra numbers, moreover, would let the fleet prosecute its current slate of operations at a slower tempo, easing wear-and-tear on hardware and crews.

Better yet, more ships confers greater reserve strength should war erupt. A bigger force is a more resilient force. It can afford to lose ships in combat and fight on. Greater numbers of hulls, then, will pay dividends in war as well as peace.

James Holmes is Professor of Strategy at the Naval War College, coauthor of Red Star over the Pacific, and a recent recipient of the Navy Meritorious Civilian Service Medal. The views voiced here are his alone.