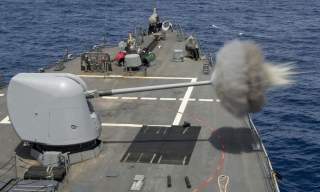 The Navy is seeking longer-range precision weapons for its deck-mounted “5-inch” guns to better destroy enemy targets, defend maritime forces on the move in combat and support amphibious operations.

Every Navy Cruiser and Destroyer is armed with “5-inch” guns to attack land and sea targets from the deck of a ship. In existence since the 70s, the weapon can be used to attack enemy targets or lay down suppressive fire so that maritime forces can better maneuver or reposition while in battle.

However, the 5-inch guns, called Mk 45, have a maximum effective range of only about eight or nine miles, and the current rounds lack precision so many rounds need to be fired in order to ensure that targets are destroyed.

A new Raytheon-developed GPS-guided Excalibur N5 round, however, can pinpoint target out to about 26 nautical miles, Paul Daniels, Raytheon business development, Excalibur, told Scout Warrior in an interview.

"We're more than tripling the max effective range of the Mk 45 five inch guns and providing Excalibur precision with less than 2-meters miss distances at all ranges,” he said.  “Think of the area that you can cover as a commander of a ship -- that is about 8 nautical miles, 200 squared nautical miles around your ship to more than 2,000 square miles,” Daniels said.

The new round, which recently destroyed a target in a test at Yuma Proving Grounds, Ariz., is being offered in response to a 2014 Navy Request for Information to industry for precision-guided technology for the services’ 5-inch guns.

The initiative to develop longer range precision weapons is entirely consistent with the Navy’s often discussed “distributed lethality” strategy. The idea is to not only better arm the fleet with more lethal and effective offensive and defensive weapons but also enable the fleet to better “distribute” its forces across wider swaths of geography, Navy leaders explain.

Longer range weapons could increase the distances at which Navy forces could operate, be less at risk of enemy fire, and still hold an enemy at risk with precision-guidance technology.

The extended range of the Excalibur N5, Daniels explained, could prove valuable for amphibious Marine Corps forces in need of fire support while approaching shore.

“It is also a critical capability to support Marines ashore which is naval surface fire support. This is a longstanding capability gap the Marines have had. They want extended range and they want precision to support amphibious operations. Now they can use Excalibur to support their operations ashore,” Daniels explained.

The new Excalibur N5 emerged as a result of making several modifications to an Army 155mm precision-guided artillery round called Excalibur 1B; this weapon, in service now for many years, has been used more than 800 times in combat and successfully helped commanders complete attack missions during the ground wars in Iraq and Afghanistan.

The round has been particularly effective against terrorist and insurgent targets, including force positions, IED-making facilities and enemy bunkers. Precision is of particular relevance in a counterinsurgency type of combat environment and battles against forces such as the Taliban or Iraqi insurgents.  In these types of scenarios, targets often quickly move, shift in close-in urban settings and at times deliberately blend in with civilian populations.

“We are leveraging all the technology and investment that has been developed by the Army and brining that to this Navy Mk45 five-inch gun. We are re-using 100-percent of the guidance and navigation unit from the Army projectile, 70-percent of all parts and 99-percent of the software,” Daniels said

In order to produce the Excalibur N5 round, Raytheon engineers simple take the front end of the round off the production line of the existing Excalibur 1B round and re-use the technology for the new munition.

“It has all the electronics that make the projectile work. It is engineered so that the electronics can survive the extreme forces of gunfire. We are talking about upwards of 15,000 Gs. The Army has spent a lot of time and money developing a consistent weapon,” Daniels said.

The Army and Marine Corps 155mm artillery shell is configured to fire from a 6-inch barrel, whereas the Navy’s ship-based guns are 5-inch guns. As a result, the body of the Excalibur N5 round has been slightly tweaked in order to accommodate the Navy guns.

For instance, the “canards” or fins at the front end of the round that help guide and correct the weapon’s flight path, called “control actuation systems,” have been slightly modified for the new round, Daniels explained.

The Excalibur N5 could be operational within several years. The explosive in the weapon can detonate using three different methods; point detonate allows the weapon to explode upon impact, delayed detonate gives the weapon an ability to break through up to four inches of concrete before detonating – and “height of burst” detonate mode allows the weapon to use a sensor to determine it is near the desired target and explode in the air, Daniels said.

The weapon often lands on a steep vertical trajectory, allowing the kinetic energy of impact on a target to break the round through up to 4-inches of concrete before exploding, he added.

As part of its development of both variants of the Excalibur weapon, Raytheon has engineered the weapon with a dual-mode seeker which can alternate between GPS and laser guidance technology.

During a recent weapons test, the Excalibur round was launched with GPS guidance and then, at a given point in its trajectory, it used its laser-guidance seeker technology to find a different target location while in flight.

“It handed off from GPS guidance to the laser guidance and destroyed the target at the very first test,” Daniels added. “This is important in a land attack circumstances because may there is an urban environment.”

Laser guidance technology could be particularly relevant in a fast-moving urban combat circumstance wherein targets might quickly move – and the utmost precision is called for.

When it comes to maritime targets, however, the Navy might be interested in what is called “millimeter wave” seeker technology, Daniels said. This guidance technology is able to help the weapon guide its way to a target in bad weather or conditions where a target could be obscured such as rough seas.

“The Navy would like to be able to fire in a maritime environment against things like fast-moving boats in bad weather in rough seas. They would potentially rather not have a laser designator but might prefer a fire and forget, millimeter wave approach. You can hand off from GPS guidance to a millimeter wave seeker,” Daniels explained.

The Excalibur round is also capable of functioning in a GPS jamming environment, although details about how this works are not publically available.

Costs of the round can vary depending upon the quantity purchased, however previous Excalibur rounds have sold for about $ 68,000 per round, sources indicated.