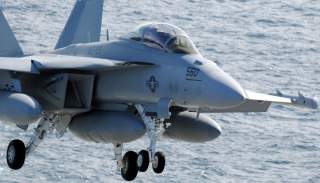 The Navy's Next-Generation Jammer, to be ready by 2021, is designed to jam multiple radars at the same time and defeat future high-tech enemy air defenses.

“The whole idea is to get the enemy air defense systems from seeing the strike package. It does not matter what type of aircraft we are protecting. Our mission is to suppress enemy air defenses and allow the mission to continue. This is not just designed to allow the aircraft to survive but also allow it to continue the mission - deliver ordnance and return home,” Cmdr. Ernest Winston, Electronic Attack Requirements Officer, told Scout Warrior in an interview.

The Next-Generation Jammer consists of two 15-foot long PODs beneath the EA-18G Growler aircraft designed to emit radar-jamming electronic signals; one jammer goes on each side of the aircraft.  Radar technology sends an electromagnetic ping forward, bouncing it off objects before analyzing the return signal to determine a target's location, size, shape and speed...etc.  However, if the electromagnetic signal is interfered with, thwarted or "jammed" in some way, the system is then unable to detect the objects, or target, in the same way.

“It is able to jam multiple frequencies at the same time -- more quickly and more efficiently,” he said.

“It will be the only AESA-based carrier offensive electronic attack jamming pod it DoD. What it is really going to bring to the fleet is increased power, increased flexibility and more capacity to jam more radars at one time,” Winston added.

The new jammer is designed to interfere with ground-and-air based threats such as enemy fighter jets trying to get a missile "lock" on a target.

One of the drawbacks to ALQ 99 is that it was initially designed 40-years ago and is challenged to keep up with modern threats and digital threats with phased array radars, increased power, increased processing and more advanced wave forms, Winston explained.

The Next-Generation Jammer is being engineered with what’s called “open architecture,” meaning it is built with open computing software and hardware standards such that it can quickly integrate new technologies as threats emerge.

For example, threat libraries or data-bases incorporated into a radar warning receiver can inform pilots of specific threats such as enemy fighter aircraft or air defenses. If new adversary aircraft become operational, the system can be upgraded to incorporate that information.

While radar warning receivers are purely defensive technologies, the NGJ is configured with offensive jamming capabilities in support of strike aircraft such as an F/A-18 Super Hornet or F-35 Joint Strike Fighter.

The jammer is intended to preemptively jam enemy radars and protect aircraft by preventing air defenses from engaging.

“With surface-to-air missile systems, we want to deny that track an engagement opportunity. We try to work with the aircraft to jam enemy radar signals,” Winston added.

The NGJ could be particularly helpful when it comes to protecting fighter aircraft and stealth platforms like the B-2 bomber, now-in-development Long Range Strike-Bomber and the F-35 multi-role stealth fighter. The technology is designed to block, jam, thwart or “blind” enemy radar systems such as ground-based integrated air defenses – so as to allow attack aircraft to enter a target area, conduct strikes and then safely exit.

This is useful in today’s modern environment because radar-evading stealth configurations, by themselves, are no longer as dominant or effective against current and emerging air-defense technologies.

Today’s modern air defenses, such as the Russian-made S-300 and multi-function S-400 surface-to-air missiles, will increasingly be able to detect stealth aircraft at longer distances and on a wider range of frequencies. Today’s most cutting edge systems, and those being engineered for the future, use much faster computer processors, use more digital technology and network more to one another.

“Multi-function radars become much more difficult because you have a single radar source that is doing almost everything with phased array capability. However, with the increased power of the next-generation jammer we can go after those,” Winston said.

“It is a constant cat and mouse game between the shooter and the strike aircraft. We develop stealth and they develop counter-stealth technologies. We then counter it with increased jamming capabilities.”

The NGJ is engineered to jam and defeat both surveillance radar technology which can alert defenses that an enemy aircraft is in the area as well as higher-frequency “engagement” radar which allow air defenses to target, track and destroy attacking aircraft.

Winston would not elaborate on whether the NGJ’s offensive strike capabilities would allow it to offensively attack enemy radio communications, antennas or other kinds of electronic signals.

Overall, the Navy plans to buy as many as 135 sets of NGJs for the Growler. At the same time, Winston did say it is possible that the NGJ will be integrated onto other aircraft in the future.

"This is a significant milestone for electronic warfare," said Rick Yuse, president of Raytheon Space and Airborne Systems. "NGJ is a smart pod that provides today's most advanced electronic attack technology, one that can easily be adapted to changing threat environments. That level of sophistication provides our warfighters with the technological advantage required to successfully prosecute their mission and return home safely."