The U.S. Navy's Master Plan to Dominate Russia and China 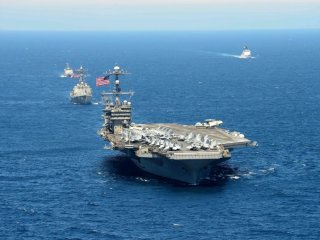 Earlier today the U.S. Navy’s top uniformed officer released a new plan to keep the sea service ahead of its Russian and Chinese rivals.

While the new document will shape the Navy’s strategy, the service uses the term “design” to emphasize the its built-in flexibility to recognize the rapid rate of change occurring in both technology and the maritime domain.

“This guidance frames the problem and a way forward, while acknowledging that there is inherent and fundamental uncertainty in both the problem definition and the proposed solution,” Adm. John Richardson, chief of naval operations. “As we move forward, we'll respect that we won't get it all right, and so we'll monitor and assess ourselves and our surroundings as we go. We'll learn and adapt, always getting better, striving to the limits of performance.”

1) "Strengthen Naval Power at and from Sea"

3) "Strengthen our Navy Team for the Future"

4) "Expand and Strengthen our Network of Partners"

The Navy’s strategic environment has changed in recent years, Richardson states in the document, but the fundamentals of sea power as laid out by U.S. strategist Capt. Alfred Thayer Mahan during the nineteenth century remain relevant. “America’s interests lie beyond our own shores. What was true in the late 19th century holds true today—America’s success depends on our creativity, our entrepreneurism, and our access and relationships abroad. In an increasingly globalized world, America’s success is even more reliant on the U.S. Navy,” the document states.

There are three forces that “energize the quickly changing environment” in which the Navy operates. The first is the classic maritime system—traffic on the oceans, seas and waterways and even the sea floor. The second force is the global information system—the data that travels via servers, undersea cables, satellites and wireless networks. The third force is the increasing rate of technological creation and adoption. “These three forces—the forces at play in the maritime system, the force of the information system, and the force of technology entering the environment—and the interplay between them have profound implications for the United States Navy. We must do everything we can to seize the potential afforded by this environment,” Richardson said in the document.

Unlike the previous twenty-five years, the U.S. Navy can’t expect to operate unchallenged on the high seas. The Russians and Chinese are closing the gap, and as such, the U.S. Navy must move to maintain its advantages. “Russia and China both have advanced their military capabilities to act as global powers. Their goals are backed by a growing arsenal of high-end warfighting capabilities, many of which are focused specifically on our vulnerabilities and are increasingly designed from the ground up to leverage the maritime, technological and information systems,” Richardson said. “They continue to develop and field information-enabled weapons, both kinetic and non-kinetic, with increasing range, precision and destructive capacity. Both China and Russia are also engaging in coercion and competition below the traditional thresholds of high-end conflict, but nonetheless exploit the weakness of accepted norms in space, cyber and the electromagnetic spectrum. The Russian Navy is operating with a frequency and in areas not seen for almost two decades, and the Chinese PLA(N) is extending its reach around the world.”

But it’s not just Russia and China—lower level threats like North Korea and Iran have access to advanced technology that could challenge American naval supremacy. “Others are now pursuing advanced technology, including military technologies that were once the exclusive province of great powers—this trend will only continue,” Richardson said.

To counter these forces, the U.S. Navy will improve training, coordination within its own branches, and collaborate with other U.S. forces, agencies and industries.

Here are some of the key points:

1) "Maintain and modernize the undersea leg of the strategic deterrent triad. This is foundational to our survival as a nation."

2) "In partnership with the Marine Corps, develop concepts and capabilities to provide more options to national leaders, from non-conflict competition to high-end combat at sea. Operations short of conflict should be designed to contain and control escalation on terms favorable to the U.S. Combat at sea must address 'blue-water' scenarios far from land and power projection ashore in a highly 'informationalized' and contested environment. All scenarios must address the threat of long-range precision strike. Test and refine concepts through focused wargaming, modeling, and simulations. Validate these concepts through fleet exercises, unit training and certification."

4) "To better meet today’s force demands, explore alternative fleet designs, including kinetic and non-kinetic payloads and both manned and unmanned systems. This effort will include exploring new naval platforms and formations—again in a highly 'informationalized' environment—to meet combatant commander needs."

6) "Expand the use of learning-centered technologies, simulators, online gaming, analytics and other tools as a means to bring in creativity, operational agility and insight."

7) "Optimize the Navy intellectual enterprise to maximize combat effectiveness and efficiency. Reinvigorate an assessment culture and processes. Understand the lessons of history so as not to relearn them."

10) "Strengthen and broaden leadership development programs to renew and reinforce the Navy Team’s dedication to the naval profession. Leader development will be fleet-centered and will begin early in our careers, focusing on character and commitment to Navy core values. Character and leadership will be rewarded through challenging assignments and advancement."

11) "Strengthen organizational integrity by balancing administrative requirements with the benefits gained from the time spent. The goal will be to return more time to leaders and empower them to develop their teams. Strengthen the role of Navy leaders in leading and managing civilian professionals as key contributors to the mission effectiveness of our Navy Team."

12) "Enhance integration with our Joint Service and interagency partners at all levels of interaction to include current and future planning, concept and capability development and assessment."

14) "Deepen the dialogue with private research and development labs, and academia. Ensure that our Navy labs and research centers are competitive and fully engaged with their private-sector partners."

15) "Increase the volume and range of interaction with commercial industry. Seek opportunities through non-traditional partners."