The U.S. Navy's Master Plan to Rebuild Its Sub Fleet 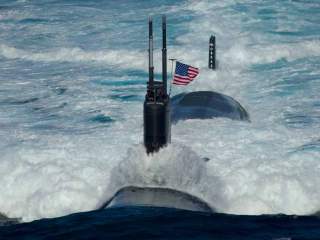 The United States Navy is reexamining how many nuclear attack submarines it will in need in the coming decades in light of a resurgent Russia and an increasingly hostile China. Both of those nations are rapidly building fleets that are challenging the U.S. Navy’s ability to control the undersea domain.

Right now, the Navy has a standing requirement for forty-eight nuclear attack submarines—however, that number was set in 2006 when the international security situation was different. Faced with a Russia that is fielding advanced submarines and a China that is building a larger, but qualitatively inferior undersea fleet, forty-eight American attack submarines will not be enough.

“The security environment has changed a great deal since then, so I’ve commissioned a study to reassess that level this year,” Adm. John Richardson, chief of naval operations, told the Senate Armed Services Committee on March 15.

Richardson points out, however, that during the 2020s the number of attack boats in the fleet will dip below even the current requirement—leaving the Navy with only forty-one attack submarines by 2029. “That’s got us very concerned,” Richardson said. “We’re about able to meet about 50 to 60 percent of combatant command demands right now—so it’s a very high demand asset.”

The question is whether Electric Boat and Newport News—the two shipyards that build nuclear submarines—have the capability and capacity to build three boats per year. Mabus said that he thinks that shipyards can handle the workload—but funding is the key. “We’re working on how to get the capability and capacity to do two Virginias and the Ohio-class replacement at the same time and I’m confident that’ll be part of the 2018 budget,” Mabus said. “We clearly have the need for the two Virginia-classes.”

However, the ORP program threatens to completely derail the Navy’s shipbuilding budget unless the service gets more funding. “We have to have additional funds for the Ohio-class replacement because. . . it’s a once in a generation thing,” Mabus said. “The two times we’ve done this before . . . we have added additional funds because it is a national level program.”

Richardson’s plan to reevaluate the attack submarine requirement was met warmly not only by the Senate, but also the House Armed Services Committee.

“I strongly support Adm. Richardson’s effort to reevaluate the minimum requirement for attack submarines. The current forty-eight-boat requirement dates from the mid-2000s, and given the growth and activity of China and Russia’s submarine fleets, that requirement is clearly overdue for fresh look,” Rep. Randy Forbes (R-VA), chairman of the House Armed Services Seapower and Projection Forces Subcommittee said in a statement. “We are already on a trajectory that will take us below the old requirement, and I strongly suspect the real requirement is higher still.  That’s why I am actively working to find the funding and industrial capacity to build more submarines and sustain out undersea dominance in the years ahead.”