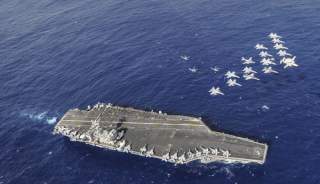 The Anti-Torpedo Defense System, currently installed on five aircraft carriers and deployed on one carrier at the moment, is slated to be fully operational by 2022.

The overall SSTD system, which consists of a sensor, processor and small interceptor missile, is a first-of-its-kind "hard kill" countermeasure for ships and carriers designed to defeat torpedoes, Navy officials said.

Earlier this year, the ATTDS was installed and operated on the USNS BRITTIN (TAKR-305) over a six day period during which the latest system hardware and software was tested. The results of the testing are instrumental for continued system development, O’Rourke added.

The technology is slated for additional testing and safety certifications.

The emergence of a specifically-engineered torpedo defense system is quite significant for the Navy - as it comes a time when many weapons developers are expressing concern about the potential vulnerability of carriers in light of high-tech weapons such as long-range anti-ship missiles and hypersonic weapons. An ability to protect the large platforms submarine-launched torpedo attacks adds a substantial element to a carrier’s layered defense systems.

Ships already have a layered system of defenses which includes sensors, radar and several interceptor technologies designed to intercept large, medium and small scale threats from a variety of ranges.

For example, most aircraft carriers are currently configured with Sea Sparrow interceptor missiles designed to destroy incoming air and surface threats and the Phalanx Close-in-Weapons System, or CIWS. CIWS is a rapid-fire gun designed as an area weapon intended to protect ships from surface threats closer to the boat's edge, such as fast-attack boats.

Torpedo defense for surface ships, however, involves another portion of the threat envelope and is a different question. SSTD is being rapidly developed to address this, Navy officials explained.

The system consists of a Torpedo Warning System Receive Array launched from the winch at the end of the ship, essentially a towed sensor or receiver engineered to detect the presence of incoming torpedo fire. The Receive Array sends information to a processor which then computes key information and sends data to interceptor projectiles - or Countermeasures Anti-Torpedos, or CAT - attached to the side of the ship.

The towed array picks up the acoustic noise.  The processors filter it out and inform the crew. The crew then makes the decision about whether to fire a CAT, Navy officials said.

The CATs are mounted on the carriers' sponson, projections from the side of the ship designed for protection, stability or the mounting of armaments.

The individual technological pieces of the SSTD system are engineered to work together to locate and destroy incoming torpedos in a matter of seconds or less.  Tactical display screens on the bridge of the ship are designed to inform commanders about the system's operations.

After being tested on some smaller ships such as destroyers, the SSTD was approved for use on aircraft carriers in 2011 by then Chief Naval Officer Adm. Jonathan Greenert, according to the Navy.

The SSTD effort is described by Navy officials as a rapid prototyping endeavor designed to fast-track development of the technology. In fact, the Torpedo Warning System recently won a 2013 DoD "Myth-Busters" award for successful acquisition practices such as delivering the TWS to the USS Bush on an accelerated schedule. The TWS is made by 3 Phoenix.

The Countermeasure Anti-Torpedo is being developed by the Pennsylvania State University Applied Research Laboratory, officials said.