The U.S. Navy's Master Plan to 'Sink' Russia and China (Or Anyone Else) 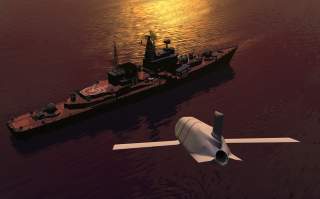 The Navy and Lockheed Martin are looking at developing a variant of the LRASM missile that fires from a deck-launcher on a ship - as opposed to having a weapon that only fires from aircraft and vertical launch tubes.

"The Navy is in the process of researching and defining requirements for a shipboard anti-ship missile.  Competition will absolutely factor into any acquisitions strategy to ensure that we fulfill the requirement at the best value to the government," Navy spokeswoman Lt. Kara Yingling told Scout Warrior in an interview last year.

Yingling said requirements for a ship-launched weapon of this kind were still being determined.

"The current LRASM program is fulfilling a specific capability for an air-launched anti-surface weapon. While DARPA evaluated the feasibility of a ship-launched variant, it would be inappropriate to speculate about a ship-launched version ahead of the requirements, informed by the updated Analysis of Alternatives (AoA), and any resulting budget plans," she added.

'A deck-mounted firing technology, would enable LRASM to fire from a much wider range of Navy ships, to include the Littoral Combat Ship and its more survivable variant, called a Frigate, Scott Callaway, Surface-Launched LRASM program manager, Lockheed Martin, told Scout Warrior in an interview.