The U.S. Navy's Master Plan to Turn the Littoral Combat Ship into a Super Weapon 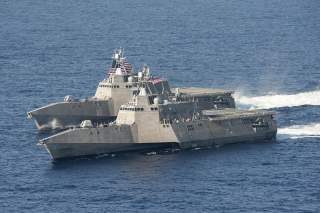 The NSM is fired from a deck-mounted launcher. The weapon uses an infrared imaging seeker, identify targets, has a high degree of maneuverability and flies close to the water in “sea-skim” mode to avoid ship defenses, he added.

While this emerging weapon is earlier in the developmental process than both the Harpoon and the NSM, it could provide an even more capable, high-tech ability to the LCS. However, industry sources indicate that the LRASM is expected to be much more expensive than the other alternatives, and a LRASM-specific deck-mounted launcher for the LCS would need to be operational before the weapon could successfully fire from the ship.

A deck-mounted firing technology, would enable LRASM to fire from a much wider range of Navy ships, to include the Littoral Combat Ship and its more survivable variant, called a Frigate, Scott Callaway, Surface-Launched LRASM program manager, Lockheed Martin, told Scout Warrior in an interview last year.