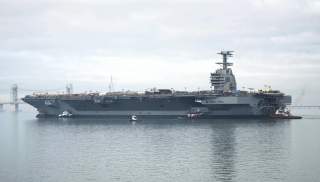 PCU Gerald R. Ford (CVN 78) is underway for its Builder's Sea Trials (BST), which are designed to test systems, components and compartments at sea for the first time before the massive 100,000-ton carrier is handed over to the U.S. Navy. The BST is designed to ensure that the massive warship functions correctly before its begins Navy acceptance trials.

According to the Navy, the service’s Supervisor of Shipbuilding and Naval Sea Systems Command personnel will be working side-by-side with Ford’s crew and and contractor teams from Huntington Ingalls Industries - Newport News Shipbuilding (HII-NNS) over the next several days to test many of the ship's key systems and technologies.

"The Navy and our industry partners are excited to have the future USS Gerald R. Ford underway under her own power for the first time, executing a rigorous and comprehensive test program for this first-of-class ship," said Rear Adm. Brian Antonio, program executive officer for aircraft carriers. "This milestone is the culmination of years of hard work and dedication, and we look forward to learning a great deal during sea trials. We will continue to work together to deliver Ford's critical capabilities to the fleet."

Once Ford completes her BST, any deficiencies found will have to be corrected before the ship moves onto her Navy acceptance trials. Only after CVN-78 has successfully completed her acceptance trials and she is formally commissioned this September will Pre-Commissioning Unit Ford receive the prefix United States Ship and become USS Gerald R. Ford.

It’s been a long journey for CVN-78. The Navy originally planned for the massive vessel to join the fleet in 2014. However, as the first in a new class of aircraft carriers designed to replace the venerable Nimitz-class, Ford was built with new features and technologies and suffered from several teething issues. Construction was slowed by first-of-class problems that issues with its new nuclear reactor design, turbines, electrical power systems, new electromagnetic aircraft launch system and advanced arresting gear. As a result, the ship’s schedule has been delayed several times.

The Ford’s problems are being resolved, but it has taken time and money. But when Ford is eventually commissioned later this year, she will be the most capable carrier in the fleet—being able to generate far more sorties than her Nimitz-class predecessors. The Ford-class also restores stability margin for the carrier’s hull and massively increases the vessel’s electrical power generation capabilities.

Ford is the first of what is ultimately expected to be at least 10 vessels of her class. The next vessel John F. Kennedy (CVN-79) was laid down on Aug. 22, 2015, and is expected to be commissioned in 2020. Meanwhile, a third vessel CVN-80—which will be named Enterprise—is expected is start construction in 2018. Eventually, the Ford-class will supplant all of the existing Nimitz-class vessels in service.

Thus, in many ways, the start of Ford’s BST marks the beginning of new era for naval aviation.