The U.S. Navy's Most Advanced Aircraft Carrier Will Soon Face Its Greatest Challenge 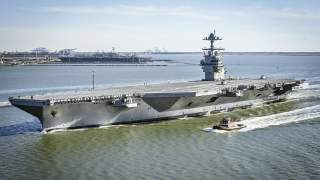 The U.S. Navy took delivery in the final day of May of the most advanced aircraft carrier ever designed or built – the CVN 78 USS Gerald R. Ford.

No modern warship is ready for combat when the Navy takes charge of the ship. The vessel’s systems must be tested, tweaked and run through a whole set of paces of an entirely more robust nature than many of the often land-based equipment-proving – and finally with a Navy crew that must go through its own training.

All of this is exacerbated with the Ford. A new carrier has enough complexity to make its post-delivery proving and prodding enough of a challenge. But CVN 78 has a raft of new transformational technologies to launch, recover and load its combat aircraft. Each of these new systems alone would be enough to cause concern for program scheduling. Having all three together – along with the usual bugs at this point in the ship’s life – could prove problematic for any kind of timeline.

But the Navy has done just that.

Post Shakedown Availability is currently projected to begin March 2018 and conclude Nov 2018, a Navy official says, with full-ship-shock trials scheduled for 2019. The plan now is to reach Initial Operational Capability in 2020, with an initial deployment expected to occur in 2022.

This, program detractors note, is years later than originally planned. And the budget continues to swell. But, again, as Navy officials have repeatedly warned through the years, building a ship with all of the advanced technology – initially, the new systems were supposed to be spread across three carriers – was not going to be cheap, easy or very easy to keep on schedule.

The post-delivery issues that have come under the spotlight recently are the the new Advanced Arresting Gear (AAG) aircraft-recovery system and the weapons-supply elevators, which are supposed to make it possible to load, reload and recover aircraft, increasing the speed and effectiveness of combat flight operations. Another problem that has surfaced rather recently is with the ship’s propulsion plant.

The AAG looks to replace existing manpower-intensive hydraulic systems with one that combines an electric motor with water twisters used to absorb the energy created by a combat jet or other aircraft as it screams to a carrier deck at full power.

But, at delivery, the Ford was incapable of conducting full flight operations with all carrier aircraft types, thanks to AAG’s schedule delays, notes recent U.S. Government Accountability Office (GAO), which says flight operations will begin after ship delivery with only the F/A-18 E/F Super Hornet.

In the report, “Ford-Class Aircraft Carrier Follow-On Ships Need More Frequent and Accurate Cost Estimates to Avoid Pitfalls of Lead Ship,”, the GAO said some “remaining testing has been deferred to post-delivery. The Navy is still resolving issues with emergent faults with the AAG system discovered during shipboard testing, while land-based testing with live and simulated aircraft continues. The Navy needs to resolve these issues in order to support aircraft operations during an exercise scheduled to take place 10 weeks after ship delivery.”

The Navy did not expect – or plan – for the Ford to be ready to launch and recover aircraft when the Ford was delivered, service Capt. Thurraya Kent says. Shipboard AAG testing is about 90 percent complete and the remaining testing will be done as the Ford schedule permits.

The Navy initially planned to retrofit AAG on the Nimitz Class. GAO points out.

“The Navy is still resolving issues with emergent faults with the AAG system discovered during shipboard testing, while land-based testing with live and simulated aircraft continues. The Navy needs to resolve these issues in order to support aircraft operations during an exercise scheduled to take place 10 weeks after ship delivery.”

One of the systems routinely touted by both the Navy and shipbuilder Huntington Ingalls Industries (HII) are the Advanced Weapons Elevators.

The 10 elevators have to carry up to about 200,000 pounds of weapons from the main deck magazine to the flight deck preparation area. Shipbuilders wired the elevator up for more electricity using linear motors, replacing the rope-and-wheel systems that required a great deal more manpower to operate and maintain.

With the new system, shipbuilders say, the elevators can carry two times the weight as the previous system, covering the distance in about third the time.  Increasing the carrying power and cutting the operating speed were key in providing the Ford with the quicker sortie rate that has been one of the ship's selling points. Getting aircraft on and off the ship at a faster clip means little if the aerial platforms are not properly armed or loaded. Early success with the new elevator system prompted Newport News to start developing a totally electric elevator system.

But it’s been a bit of a tougher ride since then. In early January 2017, the Navy reported that testing of the Advanced Weapons Elevators was 35 percent complete and that the shipbuilder would complete construction and testing of two of the 11 elevators by ship delivery, GAO notes. “The Navy is working to resolve a problem with the elevator doors in order to continue with testing. In general, the elevators continue to have issues with reliability, which will affect their ability to support aircraft operations.”

As for the propulsion plant, in June 2016, a transformer in one of the main turbine generators in CVN 78’s propulsion plant experienced a catastrophic failure, the Navy reported.

“A shipbuilder and vendor review of this incident found that the failure was likely due to a manufacturing defect in the transformer,” GAO reports. “However, a follow-on review uncovered additional problems, including issues with the voltage regulator on the main turbine generator; design and performance problems with the protection system; and excessive noise in the plant. Detailed assessments of these issues show that the voltage regulator and protection systems require design modifications. Laboratory testing of the design modifications are complete and shipboard installation is underway, which will be followed by shipboard testing. The generator incident and the time needed to conduct the subsequent reviews have affected propulsion plant testing, but program officials believe that they are able to meet the new delivery date.”

Kent says systems aboard the ship were modified to fix the generators and, during acceptance trials, these repairs were verified successfully.

HII CEO Mike Petter says the shipbuilder has learned a lesson or two – or more—from building the Ford that it has already started to employ with the next carrier, CVN 79, which could make a difference come delivery time for that vessel.

“We made some very discrete investments for carrier construction on CVN 79,” Petters told investment analysts during a quarterly financial call last month, “to drive learning curves in that program as we took the lessons that we learn from 78 and adjusted our build plan and our material plan for sequencing that ship.”

This article originally appeared on Scout.