The U.S. Navy's Most Powerful Aircraft Carrier Ever Is Close to Joining the Fleet 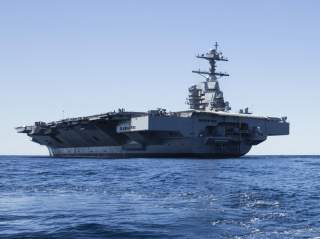 The aircraft carrier Gerald R. Ford successfully completed U.S. Navy acceptance trials last week, clearing the way for the massive new vessel to be delivered to the service for commissioning later this year. Inspectors from U.S. Navy's Board of Inspection and Survey (INSURV) gave Ford a thumbs up during a short sea trial, which took place in the Atlantic Ocean during May 24 to May 26.

"Congratulations to our Navy and industry team for all the great work that has led us to this exciting milestone," Rear Adm. Brian Antonio, Naval Sea Systems Command’s (NAVSEA) program executive officer for aircraft carriers, said in a statement. "As a result of much dedication and hard work, delivery of CVN 78 is close at hand, and we are looking forward to commissioning the ship into the fleet this summer."

According to NAVSEA, the purpose of the acceptance trials is for INSURV to make sure that Huntington Ingalls Newport News has built the ship to contract specifications and demonstrate the ability of the ship's crew to conduct operations at sea. But the process begins well before a newly built ship ever puts to sea on acceptance trials. Prior to Ford going to sea, INSURV conducted a “rigorous set of pierside trials, including more than 200 in-port demonstrations and inspections.”

Meanwhile, the three-day at-sea portions of INSURV’s acceptance trials are no less strenuous. Ford and her crew performed more than 500 INSURV demonstrations and inspectors went over the ship's hull, mechanical and electrical systems with a fine toothcomb to check for defects.

Sea-trials, acceptance trials and commissioning for Ford are somewhat more complex than for previous new carriers of the past four decades. Ford is the lead ship of the first new class of aircraft carriers in more than 40 years and incorporates revolutionary new technologies.

“CVN 78 is designed with significant quality-of-life improvements and reduced maintenance requirements,” NAVSEA states. “Several new technologies, such as the Electromagnetic Aircraft Launch System, Advanced Arresting Gear, and Dual Band Radar have been incorporated into the Ford's design. These innovations are expected to improve operational availability and capability, and reduce total ownership cost over its 50-year service life by nearly $4 billion compared with Nimitz-class carriers.”

Only after the Navy has completed acceptance trials, taken delivery and commissioned Ford into service will she receive the prefix “USS.” Meanwhile, the Navy has started construction on the next Ford-class ship, John F. Kennedy. A third ship, Enterprise is expected to formally appropriated in the fiscal year 2018 budget. Ultimately, the Navy could build as many as 10 Ford-class carriers.