The U.S. Navy's New 'Frigate': A Complete (And Obsolete) Mess? 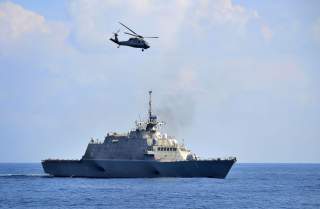 In the late 1990s, the U.S. Navy became entranced by the idea of high-tech, modular warships that would fight close to shore, where the service anticipated future naval battles to most likely occur.

The present-day outcome of that trance, the 3,000-ton Littoral Combat Ship, has not worked out as well as the designers planned. The Navy intended to buy 52 of them — but since trimmed the number to 40. (Six are currently in service.)

The modular design, allowing the vessel to swap different sets of weapons and sensors for different missions, takes more time to adjust than first envisioned. The cost has roughly doubled. The ships are also lightly-armed and cannot expect to survive, by the Pentagon’s own admission, in a shooting war with China.

Recognizing the problem, the Navy changed direction in 2014.

A portion of the total 40-ship LCS force was redesigned as “frigates,” and will be larger, with more armor and better-armed (with a longer-range anti-ship missile) than the standard LCS. This “frigate-LCS” will also carry improved countermeasures, a towed sonar array and a bigger radar.

But the frigate is hardly a major improvement, according to the Government Accountability Office. For one, the frigate jettisons the modular structure — the mission modules now cannot be swapped out — but keeps and combinesthe surface and anti-submarine warfare modules. However, the Pentagon is being vague about the specifics.

“Frigate program officials told us that the Navy has not yet determined if all frigates will be equipped with both ASW and SUW mission package equipment at all times, or if the decision about the mission equipment to be carried will depend on specific situations or other criteria,” the GAO noted in a report released June 9.

If the frigate only carries a single mission package, then it’s not that far removed from a standard LCS. It will either have the ability to defend itself against submarines, or surface ships, but not both.

In terms of anti-air weapons, the frigate LCS will only be able to defend itself — the job of protecting vulnerable support ships will fall to existing destroyers and cruisers. The other problem is that its self-defense systems do not offer “significant improvements to vulnerability,” the GAO stated.

To be sure, there is new armor, particularly around the magazines, allowing the ship to better take a hit. There are a suite of countermeasures, but all together it’s not enough to “make the new frigate as survivable as an FFG 7 [a 1970s-era era frigate retired in 2015] or a larger surface combatant, but it will provide some improvement over current LCS.”

The frigate will also be slower than the standard LCS and have shorter range. All in all, the frigate version “was the least capable option considered” by the Navy out of several alternatives, the report stated.

But it was the cheapest and quickest to produce … which is the whole point. The Navy is desperate to get ships under construction as older vessels age out. The sailing branch currently fields 274 deployable warships — well under its goal of 300.

The root of the problem is the LCS’ lightweight building materials — aluminum—and its size and unorthodox shape. In other words, it simply and physically cannot ever be as survivable as an older FFG 7, or Oliver Hazard Perry-class frigate.

A minor modified LCS could not be modified to the level of vulnerability resistance of the FFG 7 due to LCS weight and design constraints that would prevent adding more physical structure. For example, Navy task force officials told us that approximately 200 tons of additional weight in steel would need to be accommodated in the LCS seaframe designs if the Navy wanted to upgrade it from commercial build standards to more robust, Navy-like specifications like those used for FFG 7. Task force officials told us that this weight increase would have required a major modification to the LCS design or a new ship design.

However, there are potential replacements.

The Coast Guard has a capable set of Legend-class cutters, which the Navy found “could provide a full multi-mission capability, would provide greater weight and other margins which would allow for future upgrades, and have greater range and underway days.”

But building modified Legends would be more expensive and take longer, according to the Navy, than sticking with modified LCS frigates … that are more vulnerable than 1970s-era frigates the Navy already decommissioned.