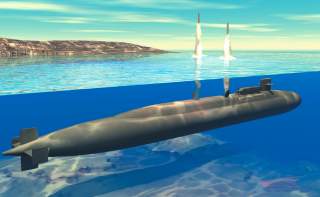 Designed to serve well into the 2080s and beyond, Navy and General Dynamics Electric Boat developers are hoping to leverage years of science and technology development to best position the new submarine to enter service by 2031.

The increased support was announced by the Department of Defense as a $203 million modification to an existing deal between the Navy and General Dynamics Electric Boat to begin manufacture of 17 new tactical missile tubes able to fire nuclear-armed Trident II D5 missiles.

A prior 95-million modification to a Naval Sea Systems Command deal with Electric Boat, a subsidiary of General Dynamics, is a key part of the Navy's broader deterrence strategy to ensure a second-strike nuclear ability from beneath the ocean around the world in the event of a catastrophic first-strike on the continental US.

The effort, which has been preceded by "tube and hull" forging work underway for several years, is part of a collaborative US-UK Common Missile Compartment program.

The US and UK are together immersed in a common missile compartment effort.  In fact, the US and UK have been buying parts together for the common missile compartment and working on a $770 million contract with General Dynamics’ Electric Boat. This recent contract modification includes foreign military sales to the United Kingdom.  Work will be performed in Quonset Point, Rhode Island, and is expected to be completed by December 2023. United Kingdom foreign military sales funding in the amount of $22,957,933 will be obligated at the time of award, a Pentagon statement said.

Earlier this year, ship specifications for the new Columbia-Class submarines were completed and the program is now in detailed design phase and initial production contract, service officials said.

"The program was approved to proceed to Milestone B Jan. 4, authorizing it to enter into the engineering and manufacturing development phase and permitting the transition from preliminary design to detail design,"  William Couch, spokesman for Naval Sea Systems Command, told Scout Warrior earlier this year.

The new submarines are being designed for 42 years of service life.

Detailed design for the first Columbia-Class submarine is happening now. The new submarines are being engineered to quietly patrol the undersea domain and function as a crucial strategic deterrent, assuring a second strike or retaliatory nuclear capability in the event of nuclear attack.

The Navy is only building 12 Columbia-Class submarines to replace 14 existing Ohio-class nuclear-armed boats because the new submarines are being built with an improved nuclear core reactor that will better sustain the submarines, Navy officials have said.

As a result, the Columbia-Class submarines will be able to serve a greater number of deployments than the ships they are replacing and not need a mid-life refueling in order to complete 42 years of service.

With the life of ship reactor core, there is not a need for mid-life refueling, Navy developers explained.

will utilize Virginia-class’s fly-by-wire joystick control system and large-aperture bow array sonar. The automated control fly-by-wire navigation system is also a technology that is on the Virginia-Class attack submarines. A computer built-into the ship's control system uses algorithms to maintain course and depth by sending a signal to the rudder and the stern.

The submarines combat systems from Virginia-class attack submarines, consisting of electronic surveillance measures, periscopes, radios and computer systems, are also being integrated into the new submarines.

The Columbia-Class will also use Virginia-class’s next-generation communications system, antennas and mast. For instance, what used to be a periscope is now a camera mast connected to fiber-optic cable, enabling crew members in the submarine to see images without needing to stand beneath the periscope.  This allows designers to move command and control areas to larger parts of the ship and still have access to images from the camera mast, Electric Boat and Navy officials said.

In total, the Navy hopes to buy 12 of the new submarines to serve into 2085 and beyond.