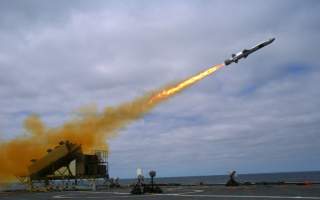 The Navy is now finalizing the weapons, sensors and technologies it plans to engineer into a new, more survivable and lethal Littoral Combat Ship variant designed to perform anti-submarine and surface warfare functions at the same time, service officials said.

“You will be able to employ both of those mission areas simultaneously,” Capt. Dan Brintzinghoffer, Frigate Program Manager, told Scout Warrior in an interview. “This provides the fleet with flexibility because you can employ those ships in multiple ways and multiple venues.”

The new ship, called a Frigate, will be integrated with anti-submarine surface warfare technologies including sonar, an over-the-horizon missile and surface-to-surface weapons such as a 30mm gun and closer-in missiles such as the Hellfire,

“You will be able to have both the long range over-the-horizon missile and the Hellfire on board at the same time,” Brintzinghoffer said.

Some of the over-the-horizon missiles now being considered by the Navy include the Naval Strike Missile by Kongsberg, a modified Tomahawk missile or the Long-Range Anti-Ship missile, or LRASM made by Lockheed and the Pentagon's research arm, DARPA. It is not yet known whether the Frigate will be engineered with Vertical Launch Systems to fire larger, longer-range missiles such as a Tomahawk or Standard Missile 6, among others. However, that could be a possibility depending upon emerging Navy requirements for weapons on the ship, developers have said.

The Frigate is slated for delivery to the Navy by 2023; the platform is an outgrowth of the Navy’s Littoral Combat Ship effort which originally planned to build 52 shallow-water multi-mission ships equipped with interchangeable groups of technologies called “mission packages” for mine countermeasures, anti-submarine technologies and surface warfare systems.

(This first appeared in Scout Warrior.)

However, lawmakers, analysts and some members of the Navy argued that the LCS was not “survivable” enough, meaning despite its speed of 40-knots and numerous advantages, the ship would be far too vulnerable to enemy attack.  The concern, ultimately echoed by then Secretary of Defense Chuck Hagel, was that the ship did not have enough weapons, armor fortifications and what’s called “blue water” combat capability to challenge near-peer adversaries.

“LCS as designed is a focused mission ship. It can do one specific mission at a time and the combat capability to do that mission is provided by the mission packages,” he added.  “We are going to take a modified LCS and take that as the baseline and then add changes or modifications to improve its lethality and survivability.”

The new ship will also have seven 11-meter Rigid Inflatable Boats for short combat or expeditionary missions such as visiting, searching and boarding other ships.

At the same time the anti-submarine technologies planned for the ship include a multi-function towed array sonar, variable depth sonar to detect submarines and sensors combined with a submarine hunting MH-60R helicopter.

While the LCS, which is currently in service with the Navy, is credited for its speed, maneuverability and shallow draft which enables it to access shallow water ports larger ships are unable to reach. The LCS ships in service this far have performed quite well, Navy officials explained. Six LCS vessels are currently in service, a spokesman for Naval Sea Systems Command told Scout Warrior.

The initiative to engineer a more survivable and lethal LCS variant emerged out of a multi-month effort directed by Secretary Hagel and the formation of an entity called the Small Surface Combatant Task Force.

“The Secretary of Defense directed the Navy to stop building LCS at 32 ship and do a study or come up with alternatives to see what the remaining 20 need to be to meet the small surface combatant requirement. The Navy put together a task force and built a series of options and a methodology around which they were able to do an assessment of alternatives,” Brintzinghoffer explained.

The exact configuration of many of the weapons systems, which will be complemented by next-generation computing technology, sensors and communications gear, is still being determined.

“For the last seven months we have laid out a series of design cycles and come up with proposed changes and alternatives to improve survivability and lethality. We have come through a number of those and we are now recommending to the Navy leadership a design that provides a capability to the fleet,” Brintzinghoffer explained.

The emerging Frigate ship will also be equipped with next-generation and stronger electronic warfare technologies far greater than the existing LCS and instead comparable to current Navy Cruisers and Destroyers, he added.

In addition, the ship will be configured in what’s called a “modular” fashion, meaning it will be engineered to accept and integrate new technologies and weapons as they emerge such as lasers and rail guns, Brintzinghoffer added.

“Technology over the next six to seven years will enable us to use some sort of a laser weapon or rail gun. As technology improves and we can have a different type of gun, the Navy will have that option with an understood set of interfaces and standards of space, weight and power,” he said.

With its mission packages, the LCS is configured to perform specific missions, one mission at a time, Brintzinghoffer said.  The Frigate is being engineered to meet anti-submarine and surface warfare missions at the same time.

Another potential area of innovation designed to improve protection for the new Frigate is the use of “space armor” techniques.

“This involves taking specific spaces and improveing the armor and ballistic protection of the ship to make it more survivable,”Brintzinghoffer added. “Putting armor in vital places improves your ability to absorb damage.”

Part of the rationale for developing the Frigate relates to a new Navy strategy to better arm its vessels with offensive and defensive weapons, enabling them to be better equipped for what's called deep or "blue water" combat. The strategy, called "distributed lethality," seeks to better prepare the Navy for higher-tech adversaries and potential near-peer competitors. A key part of the rationale for this strategy is to engineer a wider range of ships with the weapons and technology to counter, challenger of defeat vessels from potential rivals such as Russia or China.

During the last 15 years or so, the ongoing ground wars encouraged the Navy to focus on anti-piracy, counterterrorism, ensuring freedom of navigation and a technique they call Visit, Board, Search and Seizure where small mobile teams board other vessels.

While the Navy is, perhaps more than ever, still committed to freedom of navigation and working to ensure safe passage in strategic areas in international waterways, the new strategy is aimed at ensuring the entire fleet is engineered with the sensors, computer technology, radar, communications gear and weapons systems to over-match any potential near-peer competitor. The strategy seeks to ensure the U.S, Navy retains its technological advantage amidst a fast-changing global technological landscape. Potential adversaries are increasingly acquiring advanced technologies and weapons enabling them to close the gap with the U.S.; the new Navy strategy is designed keep the U.S fleet in front of the rest of the world and retain its position as the world's most advanced and powerful Navy.