The U.S. Navy's New Super Stealth Destroyer Is Getting Ready for Combat 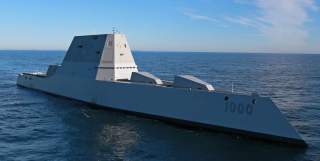 One of the biggest question marks remaining for the DDG 1000 USS Zumwalt is whether its radar and missile systems will work as redesigned ---- and radar manufacturer Raytheon is wasting no time in making sure its sensor meets U.S Navy needs.

The ship is slated to test and certify its combat system after it arrives later this year in its homeport of San Diego. But Raytheon officials say the plan is to start activating and operating the radar before its arrival on the West Coast.

“We have set up during the transit processes to turn around the changes and make modifications – especially in software, which is where you primarily will find those things -- and get them installed on the ship so we can keep testing during transit,” says Wade Knudson, Raytheon DDG 1000 program manager.

The Zumwalt’s radar system modifications by now are well known – the Navy eliminated the volume-search portion of the proposed Dual-Band Radar, requiring modifications to the Raytheon AN/SPY-3 active-array Multi-Function Radar (MFR) eventually put aboard the Zumwalt to restore most of that function.

However, the Navy also has directed that the Zumwalt use existing fleet missiles, requiring more modifications to make sure the weapons and sensors can operate together as radars and missiles do on other guided-missile vessels.

The heart of a multi-function radar is the management of the radar’s resources to direct or redirect its RF energy as well as receive and process signals to predict the courses of enemy missiles, track and illuminate targets and guide weapons fired from its own ship.

The radar is constantly searching, analyzing return reflections, computing bearings and courses, predicting where a target will be based on data and algorithms – and then adjusting or readjusting based on missile trajectory, speed and other attributes. The faster the target, the faster the necessary processing.

A radar’s resource determines a combat system’s effectiveness. A MFR has no trouble handling any single missile threat. The concern is how many missiles does it take to overwhelm a radar’s resource management or radar timeline budget, in which case the radar may be unable to properly track incoming threats or guide offensive missiles.

The Navy’s worry about the SPY-3 now is whether the modifications needed to restore some of the volume-search functions will cause the sensor to use up its radar timeline budget even more quickly.

The SPY-3 implementation already has had an impact on the ship’s proposed missile operations. The Navy directed that Zumwalts use existing missiles because it was believed it would be cheaper and easier than developing new weapons for the new radar.

But the Standard Missile (SM)-2 IIIB slated for DDG-1000 required quite a few changes to make the weapon compatible with the MFR, according to the Navy and Raytheon.

This included implementing a new software package to support the waveform, transmit and receive link messages to the MFR as well as modified missile receivers, transmitters, encoders, decoders and a redesigned digital signal processor.

Raytheon and Navy testers have more than radar resources and missile modifications to consider in making sure the combat system works as it is intended to.

The Navy established new requirements for ship-to-missile weapon link frequency, power levels and waveforms for Zumwalt-loaded SMs and Evolved Sea-Sparrow Missiles (ESSMs). But the service also carried over requirements on Aegis-outfitted ships for missiles’ pre- and post-launch interfaces and electromagnetic vulnerability requirements, even though the radar, missiles and even the vertical launchers are different. The DDG-1000 uses the new Mk57 launcher while Aegis ships use the MK41.

engagements utilizing “inertial” guidance commands instead of the “command” guidance normally associated with the Aegis Combat System to intercept their targets, Raytheon notes.

ICWI is currently deployed by the German and Dutch Navies aboard their Trilateral Frigate Programs which also utilize the ESSM and SM-2 Block IIIA missile.

The first actual live firing tests for the modified system and missiles is slated for 2017 aboard the Navy’s Self Defense Test Ship. But Raytheon points out the DDG 1000 combat system has been through its paces at the Navy’s Wallops Island Engineering Test Facility where missile to radar integration is being tested using actual SPY-3 production hardware, production releases of both the radar and combat system software and Inert Operational Missiles (IOM) representing both the ESSM and SM-2 Block IIIA missiles.

IOMs are essentially actual production missile hardware without the energetics which provide the most realistic integration test possible without actually firing the missile.