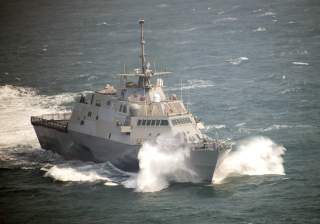 Lost, or at least overlooked, in all the hubbub created by Defense Secretary Ashton Carter’s decision to radically restructure the Littoral Combat Ship (LCS) program and ongoing sniping from some ill-informed individuals about performance and cost issues are two important facts. First, that some two dozen LCS are either in the fleet, under construction or under contract. They have been produced on time and at decreasing unit cost. Yes, there have been problems with the first several ships produced. Every new class of ships has had teething problems. Multiply those for LCS by two for the two different designs and then add a big factor that reflects changes in construction standards and the reality that the basic mission for the LCS has changed at least twice already. But since the Navy is going to have at least 40 of them and I am willing to bet more, including now some 12 larger frigate variants, the fact is that it is time for the naysayers to accept reality and those building and outfitting the LCSs to get on with delivering the best ships possible.

The second fact, and the important one, is that the LCSs are going to be really good additions to the fleet, particularly given the Navy’s plans to enhance their capabilities. This too shouldn’t surprise anyone. With ships lasting 40, 50 and even more years, upgrades and enhancements have become the norm. The fleets of Aegis cruisers and destroyers have undergone multiple upgrades to their weapons, sensors and battle management systems. The Virginia-class nuclear-powered submarine is being built in blocks, each successive one incorporating advances in technologies. The next, or fifth, block will include the Virginia Payload Module that will enable these boats to carry many additional cruise missiles or even a fairly large ballistic missile.

The LCS program began to morph from an ugly duckling into a fighting bantam back in 2014 under then-Secretary of Defense Chuck Hagel. At his direction, at least 20 of the originally planned 52 LCSs would be modified, providing significantly greater combat power at a relatively modest increase in price. These changes and additions included, most significantly, an anti-ship missile. This probably will be a variant of the short-range Longbow Hellfire, although the Navy plans to demonstrate the ability to launch a longer range Harpoon from an LCS at this year’s RIMPAC exercise and to outfit USS Freedom (LCS-1) with the ability to fire the Naval Strike Missile (NSM) built by Kongsberg Defense and Raytheon. In addition, the upgraded LCS will now carry the SeaRAM close-in defense missile, additional 25mm cannons, an improved radar, a multifunction towed array sonar, additional electronic warfare systems and more armor around critical spaces. An unspecified number of the earlier LCSs would get some of these upgrades, probably when they had a maintenance availability. As a result, the original LCS would be able to deliver quite a punch and even take one.

The Navy has taken Secretary Carter’s decision and run with it. According to public statements, they want to accelerate the move to a frigate, procuring 12 of these larger and more capable ships. As reported by BreakingDefense, the frigates would carry a “full suite of anti-ship and anti-submarine sensors and weapons, combining two of the three ‘mission modules’ for the existing LCS, plus such improvements as a medium-range ‘over the horizon’ missile to sink enemy ships.” The missile is likely to be the NSM, with a range of more than 100 miles and a sophisticated seeker.

In addition to improvements to the LCS variants, substantial progress has been made on the mission modules. Even the mine countermeasure module appears to be making progress. Although problems with the reliability of a mine hunting unmanned underwater vehicle aroused the ire of Senate Armed Services Committee chairman Senator John McCain, the rest of the module components have worked just fine.

The current concepts for enhancing LCS lethality and survivability are not the limit of what can be done. For several years, Saudi Arabia has been looking at the LCS for its naval expansion program. The Saudi Navy wants a capable ship, a multi-mission surface combatant, that would have a larger 76mm gun and a version of the Aegis air defense system including radar and the Evolved Sea Sparrow and Standard Missile, in a 16 cell Vertical Launching System. Like the U.S. LCS, the Saudi version would also deploy the MH-60R helicopter.

The Navy’s new focus on distributed lethality and its investments in R&D on programs like a shipborne laser and rail guns are likely to lead to additional possibilities to “up gun” and otherwise improve the capabilities of all the LCS variants. For a program that had so much trouble in its initial years, the future of LCS now looks particularly bright.