The U.S. Navy's Next Generation Flight III DDG-51 Destroyers are About to Get a Powerful New Radar 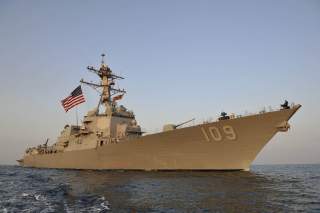 The United States Navy has awarded Raytheon a $327 million contract modification to start initial low rate production of the AN/SPY-6(V) Air and Missile Defense Radar Program (AMDR). The money covers the first three sets of radars, which are slated for installation onboard the Flight III version of the long-serving Arleigh Burke–class (DDG-51) destroyers.

“Progressing to production is the result of a lot of hard work and dedication from our AMDR team of experts across Raytheon, the Navy, and our world-class suppliers. In just over three years of the Engineering, Manufacturing and Development phase, we’ve gone from a technology demonstrator to a technically mature, highly advanced, functioning radar,” Tad Dickenson, Raytheon's Air and Missile Defense Radar program director, said. “Production begins today - which brings us one day closer to delivering this needed, and unprecedented, integrated air and missile defense capability to the Navy.”

Thanks to gallium-nitride-based technology, the new radar is many times more capable than the current AN/SPY-1 that is installed on the current generation of Arleigh Burke–class destroyers and Ticonderoga-class missile cruisers. Indeed, compared to the SPY-1D(V) on the current DDG-51 ships, the SPY-6(V) can spot a target of half the size at twice the distance of the existing radar. The system is “over 30 times more sensitive than AN/SPY-1D(V) in the Flight III configuration,” according to Raytheon.

The system is completely digital and software programmable—based on commercial computer hardware—which means that the SPY-6(V) can easily be adapted for the future. The SPY-6 (V) is capable of  “adaptive digital beamforming and radar signal/data processing functionality provides exceptional capability in adverse conditions, such as high-clutter and jamming environments,” according to Raytheon. “It is also reprogrammable to adapt to new missions or emerging threats.”

One of the key advancements of the SPY-6(V) over the previous SPY-1 system is that it uses commercial processors rather then proprietary hardware. “AMDR has a fully programmable, back-end radar controller built out of commercial off-the-shelf (COTS) x86 processors,” Raytheon states. “This programmability allows the system to adapt to emerging threats. The commercial nature of the x86 processors simplifies obsolescence replacement.”

The SPY-6(V) was designed from the outset to be scalable for installation on different ships. The active electronically scanned array set is built out of Radar Modular Assemblies—which are self-contained 2’x2’x2’ radar modules. These individual radar RMAs are combined together to form a complete radar array, thus the system is scalable. The fourteen-foot version being built for the Flight III Burkes have thirty-seven RMAs, but Raytheon could easily build a radar with a much larger array for a future cruiser, for example. “Individual radar RMAs can stack together to form any size array to fit the mission requirements of any ship, making AMDR the Navy’s first truly scalable radar,” Raytheon states.