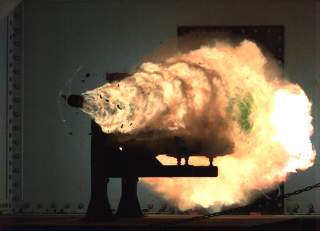 Long a staple of science fiction movies, the Office of Naval Research (ONR) is hoping to turn railguns into a practical reality onboard tomorrow’s warships. As part of its efforts, the ONR is ready to demonstrate its electromagnetic railgun technology during field trials at the Naval Surface Warfare Center Dahlgren Division's new railgun Rep-Rate Test Site at Terminal Range.

"Railguns and other directed-energy weapons are the future of maritime superiority," Dr. Thomas Beutner, head of ONR's Naval Air Warfare and Weapons Department said at the Naval Future Force Science and Technology Expo.

"The U.S. Navy must be the first to field this leap-ahead technology and maintain the advantage over our adversaries."

Railguns rely on electromagnets to launch a metallic projective—dispensing with chemical propellants. In the case of the Navy, the service has developed a new next-generation, low-drag, guided round called the High-Velocity Projectile (HVP) that it intends to use in conjunction with the railgun.

The HVP—which can also be fired from conventional cannons—would be able to hit targets at ranges of over 100 nautical miles at speeds exceeding Mach 6.

“That velocity allows projectiles to rely on kinetic energy for maximum effect, and reduces the amount of high explosives needed on ships,” according to the ONR.

Theoretically, a railgun would allow the Navy to take full advantage of the capabilities of HVP because of the increased amount of launch energy the new weapon should be able to impart to the shell.

“With its increased velocity, precision guidance and extended range, the railgun realizes the full range of the HVP's scalable lethality,” the ONR states.

“Railgun rep-rate testing will be at 20 megajoules by the end of the summer and at 32 megajoules by next year,” an ONR release stated.

“To put this in perspective, one megajoule is the equivalent of a one-ton vehicle moving at 160 miles per hour.”

While railguns show much promise for the future, there are major hurdles to overcome before such weapons are ready for prime time. One such challenge is that the Navy has to develop a barrel that can withstand repeated firings over a certain period of time. The Navy also has to develop power sources that can supply energy to electricity intensive weapons.

“The Navy currently is developing and testing railgun barrels capable of firing many rounds per minute with a tactically relevant barrel life--as well as the associated power and auxiliary systems needed to make that possible,” reads an ONR release.

“In addition, the weapon's power system now is small enough to fit aboard current and future U.S. Navy ships. These products, when matured, will create much more capable warships.”

Though railguns hold much promise, it is not clear how long it will take for the Navy to develop and field a practical weapon that can put to use onboard a future warship. If the service succeeds, it is possible that the railgun will open up new possibilities for new offensive and particularly defensive weapons. Railguns offer the potential for far deeper magazines than is possible with missile tubes.