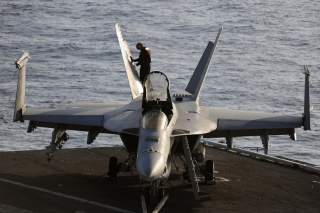 The United States Navy has officially kicked off its analysis of alternatives (AoA) for a future replacement for the Boeing F/A-18E/F Super Hornet strike fighter and its EA-18G Growler electronic attack derivative.

The Next Generation Air Dominance (NGAD) effort—which until recently used to be called the F/A-XX—will study a range of options to replace the service’s aging strike fighter fleet in an era of renewed great power contest where the threat environment promises to grow evermore challenging. But unlike previous Pentagon programs, the NGAD may not be a single new airframe—rather it might be a family of systems.

“The AOA began formally after the signing of the Materiel Development Decision Acquisition Decision Memorandum on 16 May, 2016.  The AoA will run for approximately 18 months,” Lt. Kara Yingling, a spokeswoman for the Navy’s N98 Air Warfare division told The National Interest.

“Navy is considering a full spectrum of potential alternatives to balance capability, lethality, affordability, and survivability. The solution may be comprised of a family of systems across multiple domains vice focusing on a single aviation platform.”

While the NGAD program might ultimately produce a collection of different platforms, weapons and other technologies, the core concept remains to address the capability gaps that might open up when the F/A-18 family is finally retired.

“The AoA team is looking to replace the capabilities from F/A-18E/F and EA-18G when those aircraft reach the end of their service lives, Yingling said.

“The F/A-18E/F and EA-18G currently cover a wide spectrum of mission sets in support of the Carrier Strike Group (CSG) and Joint Operations, including fleet air defense/air superiority, and strike.  The study will identify a capability replacement solution that preserves the effectiveness and viability of the CSG amidst emerging/evolving threats.”

Those emerging threats include—among many others—a host of new enemy aircraft like the Chinese Chengdu J-20 and J-31 and potent new air and missile defense systems like the Russian-built S-400 and S-500.

And the problem is not just the performance of individual enemy missile batteries or aircraft, both the Russians and Chinese have learnt to network their forces together into a coherent whole, as Rear Adm. Mike Darrah, the Navy’s program executive officer for unmanned systems and strike weapons described at the Navy League’s Sea, Air and Space symposium in May. Moreover, it’s not just the threat to the Navy’s aircraft, new Russian and Chinese long-range anti-ship cruise and ballistic missiles—particularly Beijing’s DF-26—have the ability to threaten an aircraft carrier far out to sea.

The Navy hopes that it will be able to use a family of systems approach to develop the NGAD capability to overcome those threats and maintain the carrier’s role as the dominant maritime power projection platform without breaking the bank. “A family of systems approach enables the team to consider independent solutions for each mission/capability without the constraint of having to package the solutions into a single multi-role platform,” Yingling said.” Each component of the solution set will be designed to integrate seamlessly into the Carrier Air Wing (CVW), resulting in an overall improvement in CSG capability.”

The Navy is not sure what kinds of new technology the NGAD family might incorporate, but the service is casting a wide net to find the most useful innovations.

“The AoA team is currently exploring current and emerging technologies with industry counterparts and the developmental science community—including ONR [Office of Naval Research], DARPA [Defense Advanced Research Projects Agency], service research labs, and other organizations—in order to identify the best candidates to invest in to fill the gaps created by the retirement of the F/A-18E/F and EA-18G in the 2030's,” Yingling said. “Focus areas include next generation power and propulsion systems, advanced data links, communications, weapons, manned and unmanned pairing, etc.”

The Navy has never been a huge proponent of low observable technology like the Air Force or Marine Corps has—indeed the last chief of naval operations, Adm. Jonathan Greenert, publicly stated “that stealth maybe overrated.” But the Navy will consider the use of stealth technology on the NGAD. “Stealth will be one of many attributes taken into consideration, but will not necessarily be the driving factor in determining the best solution set,” Yingling said.  “It is too early for the AoA team to ascertain how much of a role stealth will ultimately play.”

Nonetheless, Air Force officials who are working with the Navy on the Pentagon’s next-generation air superiority effort said that the Navy’s NGAD program is aimed for a more benign, more defensively oriented role than their service’s Penetrating Counterair (PCA) capability—which also confusingly used to be known as the Next Generation Air Dominance, despite being a separate program. The Air Force program will be aimed at developing the capability to penetrate into denied airspace, annihilate enemy air defenses and then effectively seize control of that airspace.

Like the Air Force, the Navy has not determined if the NGAD will be manned, unmanned or a combination of both.

“The AoA team will thoroughly explore both the capabilities and limitations of these concepts and systems.  It is too early to determine how these concepts will shape the recommended solutions,” Yingling said. She added that the Navy hasn’t even decided if the NGAD will include a new aircraft platform.  “The AoA team will answer that question over the course of the study.  While an air vehicle of some type may be required, it is not presumed.”

With the Navy hoping for an Initial Operating Capability date in the mid-2030s, the service hopes to kick off the development of NGAD relatively quickly.

“Upon completion of the analysis, a final report will be generated that outlines the results of the study and the subsequent recommended solutions,” Yingling said. “Once the study is declared sufficient and the recommendations are accepted, Navy will commence the process of Capability Development.  This process could start as early as six months from the start of the analysis.”

While the Air Force and Navy are loathed to develop another joint aircraft after their torturous experience with the Lockheed Martin F-35 Joint Strike Fighter, the two services are coordinating their efforts.

“The Navy will continue to coordinate and collaborate with the Air Force for the duration of both service AoAs,” Yingling said. “The AoA teams openly share perspectives in order to functionalize interoperability, improve efficiency, and effectively leverage the knowledge base of both services.  This includes the joint execution of modeling and simulation scenarios using common threat baselines that emphasize interoperability.”

The question, of course, that remains unanswered is how the Navy hopes to pay for the NGAD given its budget constraints.