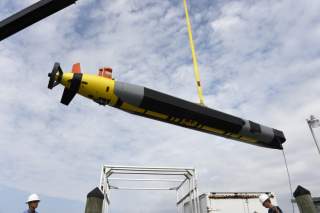 The U.S. Navy’s fleet of Seawolf and Virginia-class attack submarines are by far the most advanced vessel of their kind in the world, however new technologies are emerging that might change their role for ever.

While it is widely recognized that unmanned systems are slowly chipping away at the domain of manned aircraft platforms, less visible is the fact the robotic technologies are also impacting the undersea realm.

I asked several of Washington’s preeminent naval minds about what unmanned underwater vehicles (UUVs) might mean for the future of the Navy’s submarine force.

Bryan McGrath, managing director of The FerryBridge Group and assistant director of the Hudson Institute’s Center for American Seapower had this to say:

“We’ve only begun to scratch the surface on the utility of UUV’s. I’m impressed with the degree to which the Navy’s Submarine Force is innovating in this area, and I’d like to see the surface force begin to work more closely with them to leverage what is quickly becoming a vast undersea information architecture. We will someday see UUV’s doing a great number of things that manned submarines currently do—not replacing them but extending their power and reach the way helicopters have for the surface force. Doubling down on our mastery of the undersea environment is a no brainer.”

Jerry Hendrix, former Navy Captain and director of the Defense Strategies and Assessments Program at the Center for a New American Security, also shared his thoughts:

“UUV’s provide a unique opportunity to place a long dwell persistent all acoustic spectrum sensor in the water column. The challenges will be in the areas of communications with information collection nodes, integration of data and deconfliction with other submerged platforms.  Despite these issues, the upside of UUVs is much larger than the downsides and it’s important to accelerate their maturation and introduction into the operational environment.”

I also asked Bryan Clark, who is a former Navy submarine senior fellow at the Center for Strategic and Budgetary Assessments for his thoughts. I was fortunate in that he was preparing for his testimony before the House Armed Services Committee. As such he was able to offer a very detailed assessment of UUVs and their capabilities:

New power and control technologies are improving the endurance and reliability of unmanned undersea vehicles (UUV), which will likely be able to operate for months at a time during the next decade. The autonomy of UUVs will remain constrained, however, by imperfect situational awareness. For example, while a UUV may have the computer algorithms and control systems to avoid safety hazards or security threats, it may not be able to understand with certainty where hazards and threats are and what they are doing. In the face of uncertain data, a human operator can make choices and be accountable for the results. Commanders may not want to place the same responsibility in the hands of a UUV control system–or its programmer.

As sensors and processing improve, UUVs will progressively gain more autonomy in maintaining safety and security while accomplishing their mission. In the meantime, the U.S. Navy can expect to shift some operations to unmanned systems for which the consequences of an incorrect decision are limited to damage and loss of the vehicle, rather than loss of life or unplanned military escalation. These missions could include deploying payloads such as sensors or inactive mines; conducting surveillance or surveys; and launching UAVs for electronic warfare. For missions where a human decision-maker is needed, unmanned systems can operate in concert with submarines or use radio communications to regularly “check-in” with commanders.

The Department of Defense (DoD) has pursued a large variety of UUVs during the past decade, mostly for mine clearing and ocean surveillance and launched from surface ships or shore. These applications did not require particular sizes of UUVs. As UUVs become more integrated with submarines as part of a family of systems, the Navy should focus on UUVs that can use the submarine’s ocean interfaces and conduct the most likely UUV missions. Specifically, the Navy should pursue the following UUV types as part of its undersea family of systems:

—Micro UUVs (about 6” or less in diameter) are inexpensive and improving in their endurance and on-board power. They could be procured and deployed in large numbers or swarms as weapons, to survey the ocean floor, or interfere with enemy ASW operations.

—Small UUVs (about 12” in diameter) are commonly used today for surveys and minehunting, such as the Navy’s Mk-18 UUV. They will be able to take on other surveillance or attack missions as part of the Fleet Modular Autonomous Undersea Vehicle (FMAUV) program and operate from submarines as well as surface ships and aircraft.

—Medium UUVs (about 21” in diameter) are the size of the Navy’s Mk-48 submarine-launched torpedo. And while the Navy is not operating UUVs of this size today, the Modular Heavyweight Undersea Vehicle (MHUV) program plans to make the torpedo of the future able to be configured to conduct a range of missions, from mining and long-range attack to electronic warfare.

—Large UUVs (about 80” in diameter) such as the Navy’s Large Displacement UUV (LDUUV) are designed to use the planned Virginia Payload Module (VPM) tubes in Block V Virginia-class submarines. The LDUUV will provide a way for submarines to increase their sensor reach, expand their payload capacity, or deliver payloads into areas that are too risky or constrained for the submarine to reach.

—Extra-Large UUVs (More than 80” in diameter) would be designed to launch from shore or very large ships with well decks or “moon pools.” They could be used for long-endurance surveillance missions or primarily as “trucks “ to deliver other payloads and UUVs. Experience with LDUUV will help inform concepts for using XLUUV.