The U.S. Navy's Super Simple Plan to Grow to a 355-Ship Fleet 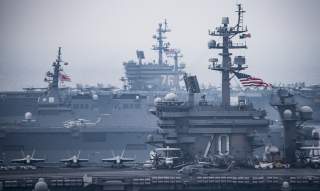 In a world where resources are constrained but where the U.S. Navy has to upgrade and grow its fleet quickly, the service will have to refurbish older warships while also developing new vessels that are designed from the outset to last longer than their predecessors.

No longer can the Navy afford to design and build cruisers and destroyers that have a 25-year lifespan.  Future surface combatants will likely have to be designed with the space, weight and power allowances—and a robust enough hull—to last as long as 50 years, just like the Navy’s fleet of nuclear-powered aircraft carriers. That’s the view of the Navy’s top leadership.

As Vice Adm. Thomas Moore, commander of Naval Sea Systems Command, pointed out during a speech at the Center for Strategic and International Studies on June 1, in previous years, the Navy typically retired cruisers and destroyers not because their hulls had worn out, but rather, because their combat systems were obsolete.

“The reality of it is that we really got rid of a lot of those ships, because from a combat systems standpoint, they had become obsolete,” Moore said.

Today, the situation is different, Moore said. With ships like the Arleigh Burke-class destroyers—which are equipped with the SPY-1D radar and Mk-41 vertical launch system—the problem is not that the combat systems are obsolete, rather the Navy needs to extend the life of those hulls with investments in maintenance.

“Now, if you want to get more service life out of the hull, you’ve got to do more maintenance on it,” Moore said.

In the aftermath of the Cold War, the Navy neglected ship maintenance for the sake of operational availability. However, the price, Moore said, was that the Navy consumed the service life of its surface combatant fleet.

“Eventually, it caught up to us,” Moore said. “We spent the better part of the last probably eight to nine years digging ourselves out of that hole.”

Building the fleet out to 355 ships over the coming years will require the Navy to draw upon its experiences in those years. As Moore explained, the fleet will have to grow—at least in part—by extending the service lives of existing cruisers, destroyers and amphibious assault ships. “We’re taking a pretty close look at what would it take to get them out another five, another 10 years,” Moore said.

“The reality is that for a steel hull—if you do the maintenance—you can get the service life out much longer.”

The Navy will look at extending the lives of its entire Arleigh Burke-class destroyer fleet and those Ticonderoga-class cruisers that have the vertical launch system installed, Moore said. Though in the case of the cruisers, a complicating factor is that those vessels have aluminum rather than steel superstructures—which might limit what is possible in terms of life extensions for those ships. And while the Navy has never extended the life of a surface combatant out so far, the service has experience in maintaining ships in service for far longer.

“We routinely take aircraft carriers out to 50 years,” Moore said. “We know how to do this.”

Keeping older Ticonderoga-class cruisers and Arleigh Burke-class destroyers in service for an additional ten years could take a decade off the time needed to create a 355-ship Navy.

“We can probably accelerate that to get to 355 by about 10 to 15 years with a relatively small investment over about a 30 years period,” Moore said. “So we’re going to take a very close look at that.”

For future surface combatants, Moore said that the Navy can no longer afford to build ships with a planned service life of 25 years— instead ships should be designed with a planned lifespan of at least 40 years. Those future ships would have to be designed and built with the space, weight and power allowances to grow over the course of four plus decades.

“I think that’s going to be part of our strategy going forward,” Moore said.