The U.S. Navy's Supersonic SeaRAM Missile System Could be a Game Changer 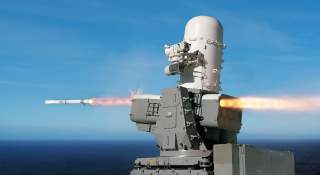 The Guided Missile Weapons System, which consists of a launcher and missile rounds  is a supersonic, lightweight, quick-reaction, fire-and-forget weapon designed to destroy anti-ship missiles, according to Raytheon developers.

A key advantage of the new system will be an increased ability to destroy several approaching enemy attacks at one time.

A product of a joint venture between the United States and Germany and installed on over 165 ships worldwide, Pentagon officials stated.

Work on the emerging GMLS is slated to be completed by 2018.

Arming the Surface Fleet With SeaRam:

The lauch-system technology development will improved and fortify a broader Navy effort to further arm its surface fleet with SeaRam missiles engineered to fire from the MK-49 Guided Missile Launching System, or GMLS. In recent months, the Navy has begun arming forward-deployed destroyers with the  emerging SeaRam ship-defense weapon able to track and destroy attacking enemy missiles, drones, aircraft, small boats and other threats, officials said.

The SeaRAM system builds upon the infrastructure and radar of the Close-in-Weapons-System, or CIWS.  CIWS' Phalanx weapon fires a 20mm cannon at close-in threats such as small boats.  The SeaRAM is part of a layered ship-defense system designed to identify and destroy longer-range approaching enemy threats, such as anti-ship missiles, drones, small boats and helicopters.

The idea is to supplement and build upon the defensive power of the CIWS, an area weapon which fires multiple projectiles from a Phalanx gun system to destroy approaching air and surface threats; SeaRAM increases the envelope of attacking threats a ship can defend against and hits targets at farther ranges than CIWS. Navy officials tell Scout Warrior they are very enthusiastic about SeaRAM, as it is the kind of weapon that enables ships to operate in a higher-threat environment.

“SeaRAM combines the RAM's accuracy, range and high maneuverability with the Phalanx Block 1B's high-resolution search-and-track sensor systems and rapid-response capability to give our ships enhanced defense-in-depth vs. a variety of potential threats,” Rockwellpate added.

“SeaRAM takes the defense envelope on a ship and expands it further out away from the ship. The rolling airframe missiles has a longer range than a gun and has the capability to engage multiple targets simultaneously,” Rick McDonnell, Program Director of Close-In Defense Solutions at Raytheon Missile Systems, told Scout Warrior in an interview several months ago.

Installation in USS PORTER is complete and USS CARNEY's is in progress, Navy officials said. Installations in ROSS and DONALD COOK will follow soon thereafter.

Unlike the CIWS weapons which, as an area-defense weapon, uses a 20mm cannon to shoot down threats close to a ship, SeaRAM fires a Rolling Airframe Missile (RAM) from an 11-missile battery, Raytheon officials explained.

“The RAM Block 2 missile completed a series of successful tests against subsonic and supersonic targets during its development, culminating in the program achieving Initial Operational Capability (IOC) in May 2015.  Testing has utilized both the MK-49 launcher and the SeaRAM launcher during test scenarios emulating real-world threats,” Rockwellpate explained.

The SeaRAM system is being installed on ships of the LCS class and can be incorporated into amphibs, carriers and other ships.  It is one of a menu of options being considered to increase surface ships' self-defense capabilities.

SeaRAM on the Littoral Combat Ship:

In addition to its integration onto four destroyers, the Navy is also engineering SeaRAM onto its Littoral Combat Ship, or LCS.

The Rolling Airframe Missile is what defense experts call a “fire and forget” missile, meaning it uses an RF or radio frequency detection technology along with a heat-seeking infrared sensor to find its way toward an approaching threat in order to intercept and destroy it.

"Cruise missiles are supersonic and by nature they are hot,” McDonnell said.

The SeaRAM also provides an advantage to the Littoral Combat Ship because it is a self-contained system, meaning it uses its own radar, software and sensors without needing to occupy other technologies or systems on the ship.

“SeaRAM will take out cruise missiles, maneuvering UAS (unmanned aircraft systems or drones) and other surface threats. What you really gain is a layered defense ability and an independent radar so that you gain a lot of situational awareness as well as increased range,” McDonnell said.

The Navy is developing two distinct variants of the Littoral Combat Ship – a trimaran hull variant called “Independence” and a flat-bottomed ship called the “Freedom” variant.

The SeaRAM is already installed on many of the trimaran hull Independence variants of the LCS and is slated to be integrated onto the Freedom variants starting with LCS 17.

Navy officials also said seaRAM will be integrated onto its now-in-development fleet of Frigates - those more survivable variants of the LCS which emerged out of the Small Surface Combatant program.

SeaRAM is designed as an integral part of a layered ship-defense apparatus engineered to build-in redundancy and increase the likelihood that approaching enemy fire is destroyed.

For example, a Navy destroyer would likely use a Standard Missile-3, or SM-3 to defend against an attacking long-range ballistic missile threat flying through space toward a target.  Medium range anti-ship missiles or sea-skimming enemy rockets could be destroyed by an SM-2 or SM-6 interceptor. Threats a bit closer could be taken out by an Evolved Sea Sparrow Missile, or ESSM, or SeaRAM before a Close-In-Weapons-System strikes down approaching fire.

Arming destroyers and the Littoral Combat Ship with SeaRAM can easily be interpreted as being part of the Navy's larger "distributed lethality" strategy wherein the service seeks to arm its surface fleet with a much larger number of offensive and defensive weapons. The idea is to help the Navy return more fully to a focus on "blue water" combat against potential "near-peer" adversaries following a decade of ground wars wherein the Navy expended more effort on things like counter-piracy, Visit Board Search and Seizure and counter-terrorism.

Raytheon won a contract earlier this year to upgrade the system to RAM Block 2, which introduced an upgraded radio frequency seeker and a digital autopilot. The RAM series has been installed on Navy ships for decades, and its latest iterations are finding homes on the Navy’s newest class of ships, the Littoral Combat Ships, as well.

The brunt of the work will be performed in Germany, but will also take place in U.S. locations such as Kentucky, Arizona, Alabama, Oklahoma, California, Pennsylvania, Florida, and Ohio. It is expected to be completed by September 2018.

The original contract deal awarded Raytheon $9.3 million with a $40.7 million option. Fiscal 2016 shipbuilding and conversion Navy funds will obligate the full $28,056,574 amount of the contract modification at the time of award and will not expire at the end of the current fiscal year. The Naval Sea Systems Command is the contracting activity.