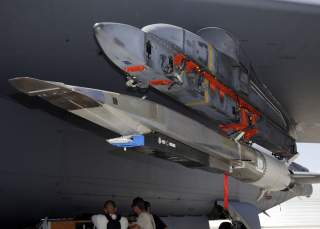 The U.S. Navy has conducted its first test of a new hypersonic missile.

The test was announced by Vice Adm. Terry Benedict, the director of the Strategic Systems Program (SSP), at the Naval Submarine League’s annual symposium in Arlington, Virginia, on November 2. “I’m very proud to report that at 0300 on Monday night SSP flew from Hawaii [Pacific Missile Range Facility] . . . the first conventional prompt strike missile for the United States Navy in the form factor that would eventually, could eventually be utilized if leadership chooses to do so in an Ohio-class tube,” Benedict said, according U.S. Naval Institute News, which first reported his remarks. “It’s a monumental achievement.”

Benedict refused to provide any other details of the test, but a Pentagon spokesperson later gave additional information when contacted by U.S. Naval Institute News. “The Navy Strategic Systems Program (SSP), on behalf of the Department of Defense, conducted an Intermediate Range Conventional Prompt Strike Flight Experiment-1 (CPS FE-1) test on Oct. 30, 2017, from Pacific Missile Range Facility, Kauai, Hawaii,” said Cmdr. Patrick Evans, the Pentagon spokesperson. “The test collected data on hypersonic boost-glide technologies and test-range performance for long-range atmospheric flight. This data will be used by the Department of Defense to anchor ground testing, modeling, and simulation of hypersonic flight vehicle performance and is applicable to a range of possible Conventional Prompt Strike (CPS) concepts.”

Hypersonic missiles are defined as those traveling at speeds between Mach 5 and Mach 10. That is, between 3,106 and 15,534 miles per hour, or one to five miles per second. China, Russia and the United States are all currently investing heavily in hypersonics, while a few other countries are also exploring the technology to a much lesser degree.

Recommended: How the U.S. Navy Could Destroy North Korea

The are two basic types of hypersonic missiles. The first are called hypersonic glide vehicles (HGVs). HGVs are launched into the atmosphere from a rocket and glide to their targets at altitudes ranging from forty kilometers to higher than one hundred kilometers. These HGVs typically fly at faster speeds than the second type of hypersonic missiles, hypersonic cruise missiles (HCMs). As their name suggests, HCMs are cruise missiles that fly at hypersonic speeds. During their entire flight, they are powered by rockets or high-speed jet engines, like scramjets.

The U.S. Navy test would have been of the latter variety and, as Benedict noted, is part of the ongoing conventional prompt global strike (CPGS) program. That program aims to give the United States the capability to conduct a precision strike on any place on earth within an hour. Interest in CPGS dates back to the 2001 Nuclear Posture Review (NPR). Since that time, the Department of Defense and all the military services have explored various technologies for achieving that capability.

For its part, the U.S. Navy began exploring a submarine-launched intermediate-range ballistic missile (SLIRBM) to fulfill the CPGS mission around 2003. These efforts continued until Congress cut off funding for it in 2008 (all CPGS funding was combined in a single DOD-wide account instead of individual programs within the services). Still, the U.S. Navy expressed renewed interest in acquiring a sea-based CPGS capabilities around the time of the pivot to Asia in 2012. In early 2014, as I noted at the Diplomat at the time, the U.S. Navy began accepting industry proposals for submarine-launched hypersonic capabilities.

This effort got a boost later that same year, after the U.S. Army’s Advanced Hypersonic Weapon program hit a snag when its second test failed. After that, according to the trade publication Inside Defense, “The Pentagon's acquisition directorate for strategic warfare then tapped the Navy to conduct the next test flight by modifying the Army-developed Advanced Hypersonic Weapon to fit in a submarine missile tube and launch the prototype weapon from a land-based test facility.” The recent test is the first milestone in the U.S. Navy’s stewardship of the program.

The move away from ballistic missile-based CPGS (which DOD has renamed Conventional Prompt Strike) and toward hypersonic capabilities has an important advantage: namely, an adversary won’t mistake a conventional ballistic missile for a nuclear one. As a Congressional Research Service report noted: “DOD has indicated that the same would be true of a submarine-launched, intermediate-range boost-glide system. It would follow a shaped or depressed trajectory, and would not resemble the launch characteristics or trajectory of a nuclear-armed ballistic missile. Moreover, if the missile used a new booster, rather than one that had been deployed as a part of the U.S. nuclear force, the difference would likely be evident to Russia’s early warning systems.”

DOD has promised the Pacific and European combatant commands that certain hypersonic capabilities will be fielded within the timeframe of fiscal year 2018–22. If the Navy’s sea-based hypersonic missile capabilities are realized, they are likely to be deployed on the four Ohio-class guided-missile submarines, as well as the new Virginia-class attack submarines.