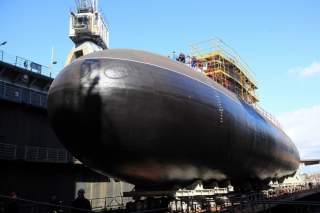 In recent years, the Russian navy has started to slowly recover from the 1991 collapse of the Soviet Union. While the Russian surface fleet still faces quite a few challenges, the country’s submarine force has been more active than ever since the end of the Cold War. Though not near as large or as capable as the once mighty Soviet submarine fleet, some of the most advanced late Soviet-era designs are starting to enter service.

The best example is Russia’s Project 885 Yasen-class nuclear attack submarine K-329 Severodvinsk, which started construction in 1993 but only entered service in 2014. The massive cruise missile-carrying SSGN’s construction had been repeatedly delayed because of post-Soviet Russia’s budgetary woes. During the intervening years, many of the vessel’s components were rendered obsolete and the follow-on Project 885M vessels—starting with Kazan—will have many refinements. Nonetheless, Severodvinsk is by far the most capable submarine in the Russian fleet.

“We’ll be facing tough potential opponents. One only has to look at the Severodvinsk, Russia’s version of a [nuclear guided missile submarine] (SSGN). I am so impressed with this ship that I had Carderock build a model from unclassified data.” Rear Adm. Dave Johnson, Naval Sea Systems Command’s (NAVSEA) program executive officer (PEO) submarines said last year during the Naval Submarine League’s symposium in Falls Church, Va. “The rest of the world’s undersea capability never stands still.”

But the Russians are well aware that time has not stood still since 1993 when Severodvinsk was laid down. The Russian navy is set to take delivery of an improved Project 885M Yasen-class attack submarine in 2016 according to Russian state media, which is named after the city of Kazan. The new Project 885M boat incorporates many improvements over Severodvinsk. Kazan is expected to have improved sensors and weapon systems compared to Severodvinsk. It is also likely to be quieter than Severodvinsk.

The Russian navy hopes to procure a minimum of eight Yasen-class attack boats. Four boats have been ordered thus far with a third vessel, Novosibirsk, having been laid down in July 2013.

While the Project 885M is an impressive and very capable vessel, it is not quite an equal to the latest American boats in terms of acoustical or sensor performance. In terms of raw performance, the Severodvinsk and her sisters are likely more similar to the U.S. Navy’s three Seawolf-class attack boats, which according to Navy sources were designed specifically to counter late generation Soviet vessel like the Project 941 Akula—also known more commonly as the Typhoon— Project 971 Shchuka-B (oddly code-named Akula by NATO) and the Project 945 Sierra-class boats.

The Yasen-class boats are fast, heavily armed and deep diving—and ideally the United States would have more Seawolf-class vessels to handle them. But while the Virginia-class subs don’t have the deep diving, high-speed open ocean performance of the Seawolf-class, it should be more than adequate to handle the handful of Project 885s that Russia builds.