The U.S. Needs a Space Force (To Win the Wars of the Future) 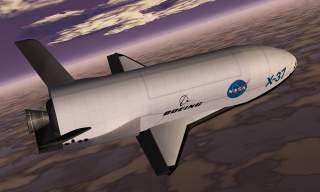 “TRUMP LAUNCHES SPACE WAR,” intoned Politico Morning Defense last week. Journalist Greg Hallman was not-quite-quoting colleague Bryan Bender’s article “Trump advisers' space plan: to moon, Mars and beyond” in Politico itself of the same day. According to documents filched from the White House, he wrote, the administration is considering “a 'rapid and affordable' return to the moon by 2020, the construction of privately-operated space stations, and the redirection of NASA's mission to 'the large-scale economic development of space’.” In all fairness, that’s no war at all, and good on that. One needn’t watch a Sandra Bullock movie to understand how space wars could get out of hand quickly. But as Paul Shinkman recently wrote for US News & World Report, those using space the most will have the most to lose. That lesson is not lost on the Russians and Chinese, so if the rest of us are using space, we’ll want to defend what we put there. Who should do that for us is another question—of whether the US needs a dedicated military force to defend its interests in space, and its use of space from here.

The question is not new. In the spring of 1999 (“The Challenge of Space Power”), then-Senator Bob Smith of New Hampshire argued in Airpower Journal for a separate Space Force or Space Corps. The Congress then demanded that the Clinton Administration investigate the possible need for a separate service. In January 2001, the Commission to Assess United States' National Security Space Management and Organization returned a negative recommendation, finding that the costs of reorganization outweighed the benefits. In July 2004 ("Will We Need a Space Force?"), Richard Moorehead of the Air Force argued in the Army's Military Review that a separate service wasn’t necessary just then, but would be eventually. After all, the US had no weapons in space, or even weapons pointed into space. Nothing of that ilk has changed in the past 13 years. But as Malcolm Davis wrote last fall for The Strategist, “both Russia and China are continuing to ignore US efforts to prevent the weaponisation of space.” The Air Force's new “Spaceplanes on the High Frontier”—starting with the X-37B—may soon provide—and need to provide—“close-in escort capabilities” for exposed American satellites.

Today, however, military space is rather like what NASA called in the 1990s its “Mission to Planet Earth”—looking down from space to influence activities on the ground, at sea, and in the air. From 1985 through 2002, all these space operations were consolidated under US Space Command, which reported directly to the defense secretary and the president as one of the ten regional or functional commands. Donald Rumsfeld shut that down, and folded Space Command into what’s now the antiseptically named Joint Functional Component Command for Space within US Strategic Command. The Air Force’s separate Space Command survived this reorganization, though it’s but one service-specific organization feeding formations into the JFCC Space.

This whole command-within-a-command thing shows a painful lack of imagination about nomenclature, and a callous disregard for the importance of military culture. As long as I am complaining about language, I will note that what Strategic Command does is not all that is strategic. It’s a nuclear weapons and space and cyber command. The amalgamation of those functions into a single command has suffered from some path-dependency, for not all permutations of those functions obviously fit together cleanly, and there are certainly strategies that meaningfully stand apart from them.

Using slightly less clinical language, US Air Force Chief of Staff General David Goldfein recently said that he wants to make his service the Defense Department’s “lead agency” for space activities. The USAF already controls most of the procurement; Goldfein wants all of it, and the training as well. The benefit, he says, is that the military as a whole will then have a “clear decision-maker” for all space matters. The general has been most polite, and he has a reasonable argument. But otherwise, the insistence that it be the Air Force reminds me of the airpower debates of the 1920s, when Billy Mitchell told the New York Times in 1922 of the “incompetency, criminal negligence, and almost treasonable administration by the War and Navy Departments” of military aviation. The United States needed an air force because ground and sea forces couldn’t be trusted not to repeatedly fumble the ball. An air force was necessary, we were told, simply because it wouldn’t be an army or a navy.

Before we go further, someone please call Robert Farley at the University of Kentucky, and try to calm him down. Rob’s book Grounded: The Case for Abolishing the US Air Force explains his position with its subtitle. I do not agree with his views about the utility of a separate flying service, but I myself argue that the necessity of any military establishment should not be casually presumed. In my own study of air arms worldwide—“Mimetic and Normative Isomorphism in the Establishment and Maintenance of Independent Air Forces,” Defense and Security Analysis, September 2016 (vol. 32., no. 3)—I argued that a key organizational question is morale. In the 20th century, nations didn’t establish air forces because their enemies had them (mimetic isomorphism), or even to provide organizational focus in the administration of military aviation. Rather, they established air forces to satisfy airmen’s desire for air-force-ness, that “professional craving to look as others look to foster political or personal legitimacy” (normative isomorphism).

Questions of where airmen want to sit and what they want to wear (light blue, almost worldwide!) are deeply important. That may sound silly, but it’s serious stuff. As Bonaparte once said, un soldat se battra longtemps et durement pour un morceau de ruban coloré. And as matter of practical evidence, the Canadian amalgamation of military services in the 1960s was widely regarded as a disaster, at least until the Liberals partly undid it in the 1970s, and not fully until the Tories killed it off in 2011. Thank God there’s again a Royal Canadian Air Force.

All that said, the trouble with the necessity arguments of the classic airpower enthusiasts is that they can be taken one step further. If ground and sea forces shouldn’t be the primary agents for air power, why should any air force be the primary agent for space power? In the US in particular, the Army and the Navy and the Marines may have a reasonable concern about transferring their space activities to Goldfein’s “Aerospace Force.” The overarching conceptual problem was and remains that the Air Force operates in the air. There’s no air in space. That’s why it’s called space. That portmanteau aerospace isn’t actually a thing. Air and space are radically different environments, presenting different engineering problems, and requiring different personal temperaments for succeeding in each. Managing satellites and intercontinental missiles calls for a different kind of person than what makes a good fighter pilot.

Indeed, what the Air Force does other than flying it doesn’t do uniformly well, as the missileer cheating crisis of the Obama Administration showed. Fairly, towards the end of that government, the USAF began paying more attention to its non-flying combat arm. Thanks to their bonuses, missileers are now highest-paid lieutenants in the service, and the USAF is looking for more senior missileers. But it’s possible that the USAF hasn’t managed this better because everything other than flying is something of a strategic distraction. In the US Navy, the three big baronies of air, surface, and subsurface coexist in creative tension with one another. In the Air Force, the missiles and space geeks are never going to challenge the pilots for real leadership, which means they’re never going to really run their own show. No one but a pilot has ever been chief of staff, and of those, only Norton Schwartz came from neither fighters nor bombers. The one partial exception I can find to the pilot pattern is Thomas S. Moorman Jr., an intelligence officer with a long career in space activities, who was vice chief of staff from 1994 through 1997.

A now-retired Air National Guard general once told me that he thought the problem with the ballistic missile force is that it hasn't had a stable home. Way back in the 1950s, the missile wings started out as part of Strategic Air Command, just like the bombers. With the disestablishment of SAC in 1992, and its merger into Tactical Air Command as Air Combat Command, the missile wings became part of Air Force Space Command. After Defense Secretary Robert Gates fired his Air Force secretary and chief of staff in 2008, ostensibly for permitting a lax culture of nuclear weapons oversight, the new leadership merged the missiles into the same organization as the bombers—Global Strike Command, which is basically SAC all over again. This was supposed to improve morale, but that intended result seems to have been elusive.

We should figure that those missiles will be here for awhile, and perhaps until global peace breaks out. Despite recent hand-wringing about costs, ballistic missiles are much cheaper than ballistic missiles on nuclear submarines, or even intercontinental bomber aircraft. What they lack in survivability they make up as poker stakes. Trying to destroy them all by attacking hundreds of continental aim points with nuclear weapons necessarily ignites an all-out war with the United States. That sounds important, so what if the missileers had a permanent home to call their own, alongside some like-minded rocketmen, for a little career diversity, and some operational duty stations outside the Great Plains?