The U.S. Air Force's Greatest Enemy Is Not Russia or China (but a Threat from Within) 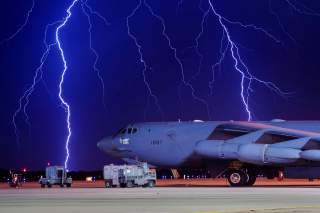 The United States Air Force is bleeding manpower at a rate so alarming Air Force leaders have described it as a ‘quiet crisis.’ In an attempt to mollify frustrated personnel, former Secretary of the Air Force Deborah Lee James and Air Force Chief of Staff, General David Goldfein, published directives last year ordering a reduction in additional duties. These burdens were a source of many complaints and reducing them was seen as a way to improve the work environment for airmen. Yet despite successful efforts to reduce some tasks, the service has created a patchwork of uneven standards across the Air Force, further sapping morale and confidence in the service.

The Air Force faces personnel shortages in a number of career fields, but it is currently most pronounced in fighter pilots. It is projected that by October 1, 2017, the Air Force will lack 1,000 aviators, almost a third of the force, and the numbers are set to worsen. The Air Force believes that the primary cause of this exodus is the recent hiring boom by the airline industry which offers experienced military pilots lucrative civilian jobs. Accordingly, the service has offered pilots retention bonuses of up to $35,000 annually, though this has not stemmed the tide.

As the Air Force already offers pilots a robust salary and good benefits in addition to the generous bonus packages, it is likely that financial considerations are not the sole causal factor of the shortage. This is backed by exit survey data from airmen separating in 2015 which revealed that 37% of the personnel found ‘additional duties’ to be a factor in their decision to leave the service.

Additional duties in the Air Force extend beyond mere paperwork. Among the odd assortment of official responsibilities are instructing first-aid courses, assisting fellow personnel with filing returns and managing the squadron’s website.

Accordingly, the Pentagon published a memo in 2016 ordering a reduction in these duties. A deadline of October 1, 2016, was self-imposed to develop new regulations implementing the changes. This date has long passed with only limited new guidance from the Air Force headquarters, and they acknowledge that “it’s kind of work in progress.”

The delay is understandable. The transformation the Air Force leadership envisions is wide-ranging, and the deadline was ambitious. Moreover, the Department of Defense was limited in what policy revisions could be made while the turnover in administration occurred, as some of these duties are prescribed by U.S. law or are entrenched in deep-rooted regulations.

Nevertheless, the Air Force leaders have stated on a number of occasions that they expect the initiative to reduce these duties should be undertaken with lower echelon commanders, not at the Pentagon. “Don’t wait for me” declared General Goldfein recently at the Heritage Foundation, “I trust the wing commanders who are entrusted with the mission to get after this.”

A wing commander is typically a colonel in charge of an air wing composed of several squadrons. These officers are familiar with the specific requirements of their units and thus are the logical leaders to spearhead change. Unfortunately, although many commanders wish to completely eradicate these tasks, regulatory barriers and a lack of resources prevent this. These obstacles have led to the implementation of a hodgepodge of standards throughout the service.

This appears to be the intent of Air Force leadership. “We’re giving commanders the authority to take risk and to take action as they see fit,” said Brooke Brzozowske, an Air Force public affairs officer, “It’s not a one-size fits all, let’s get rid of everything [plan]. Sometimes it is going to be consolidating; sometimes it is going to be putting it in different areas. Different squadrons need different things”.

The decentralized approach of the Air Force is apparent. Some wings, such as the 23rd Wing at Moody Air Force Base (AFB), the 4th Fighter Wing at Seymour Johnson AFB and 27th Special Operations Wing at Cannon AFB have made minor changes but offered no specifics. At Andrews AFB in Maryland, the 11th Wing announced it eliminated four additional duties within its squadrons and reassigned four others to higher echelon units though they did not identify which tasks.

Other wings appeared to be delegating authority even further, allowing individual squadrons to make decisions about what to cut. A wing public affairs officer at Elmendorf AFB who refused to give his name stated plainly, “Each individual squadron is responsible for additional duties.”

The 366th Fighter Wing at Mountain Home AFB in Idaho is following a hands-on, “common-sense approach.” They have eliminated positions such as the unit public affairs representative and reassigned the awards program manager to support personnel. More aggressive cuts are difficult though, as the Wing lacks the legal and regulatory authority to make the changes.

Confusion about how to implement the vision of the Air Force leadership without proper authority is a common problem. “We fall into a gray area,” noted Technical Sergeant Heather Redman, a public affairs representative from the 15th Wing at Hickam AFB in Hawaii. “The [regulations] haven’t been updated…so do we follow the verbal instructions [from the Air Force Chief of Staff] or the written guidance?”

This problem is exemplified by “voting assistance officers.” U.S. Code Title 10 orders the military to provide this support to their personnel. Mountain Home AFB has reduced the number of airmen with this duty to the bare minimum to follow the law, with only two officers assigned. This, however, is the limit to the legal authority the wing has on this issue. Without changes from Washington, the Wing is still obligated to provide the voting officers as directed by law.

Another factor hindering change at individual units is a lack of proper resourcing. Several bases noted the desire to eliminate more of these duties but were unable to do so without more support personnel. “The resources are not there” noted one active officer who wished to remain anonymous, “we can’t discharge the duties with the manpower available without allowing other things to atrophy.”

Moreover, whatever the view may be from the Pentagon, no active personnel reported any substantive changes at the squadron level. “In theory, they have been reduced,” said another unnamed pilot, “but honestly, I haven't seen any real changes yet except for maybe one or two fewer [online training courses]. I don't know if that's due to the ridiculously long hiring process for the Air Force or just because we are so short-manned.”

Air Force leaders seem to be committed to making changes. But a continued lack of guidance, authority, and resourcing from the Pentagon will only exacerbate the manpower crisis. Airmen feel they have been disappointed by promises of change in the past and they are not confident the Air Force will succeed now. “I don’t think they’re going to reduce additional duties,” said Mike Walters, a former Air Force pilot, “In my 12 years of service I heard about it a lot at the uppermost levels and at the squadron level. When it doesn’t happen, you get let down over and over, and you become conditioned to that, and you become negative. Even with the promise of improvement in the future, you just don’t believe any of it anymore. People think there’s no light at the end of the tunnel.”