The War over UCLASS (And Future of Naval Power Projection) Continues 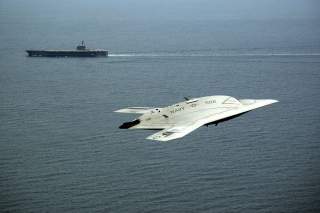 The U.S. Congress’ National Defense Authorization Act conference report for Fiscal Year 2016 has come out strongly in favor of developing a long-range penetrating unmanned carrier-based aircraft. However, even if the bill is pushed through the Hill, Congressional sources expect that President Barack Obama will almost certainly veto it.

“As access-denied environments proliferate, the carrier air wing of the future must contain a mix of manned and unmanned aircraft capable of striking in contested airspace,” said Congressman Randy Forbes (R-Va.), chairman of the House Armed Services Seapower and Projection Forces subcommittee, in an emailed statement. “Integrating an unmanned aircraft fully into the air wing must be a priority in the years ahead."

The House-Senate conference report adds $350 million to the U.S. Navy’s Unmanned Carrier-Launched Airborne Surveillance and Strike System (UCLASS) program, the requirements for which has been mired in controversy for years. While the top echelons of the U.S. Navy and many in Congress support the development of a deep penetrating strike aircraft that is able to attack an enemy that is using anti-access/area-denial techniques, there are other elements that want a more basic air vehicle.

In previous years, the Office of the Secretary of Defense—prior to Ashton Carter and deputy defense secretary Bob Work taking the helm—insisted on developing an aircraft that is optimized for operating in permissive environments with a very limited strike capability. The Naval Air Systems Command was also amongst the factions that wanted a more basic intelligence surveillance and reconnaissance (ISR) platform that could be used against terrorist networks and the like. However, Work essentially halted the UCLASS program while he reviewed the Pentagon’s ISR portfolio once he took office last year. Work was amongst those who originated the idea for a penetrating unmanned carrier-based strike aircraft when he was at the Center for Strategic and Budgetary Assessments (CSBA) in 2003.

The conference report makes it explicit that the Congress would like to see the Navy develop an unmanned carrier-launched multirole aircraft that is capable of penetrating deep into non-permissive environments. The UCLASS, as the Congress see its, should be fully integrated into the carrier air wing and must have the range, payload and survivability needed for a range of missions—including deep strike. The aircraft should also be air-refuelable to give it the necessary range and endurance for that mission.

The Congressional report directs the Secretary of Defense to use the added funding to conduct “competitive air vehicle risk reduction activities” which would lead to the fielding of such a penetrating multi-mission UCLASS air vehicle.

Industry officials couldn’t immediately comment. However, the leading industry proponent for a long-range penetrating strike UCLASS is Northrop Grumman, which developed the X-47B demonstrator. Lockheed Martin, meanwhile, has advocated for a long-range penetrating reconnaissance aircraft that could relay information back to the fleet—which is an approach favored by many Navy officials too. Boeing has remained relatively mum about their approach, but there are indications that the company had intended to offer a modestly stealthy wing-body-tail design optimized for maritime ISR. General Atomics is had previously indicated a preference for a semi-stealth aircraft design called the Sea Avenger—which is a jet-powered derivative of the Predator series.