The Wars Ravaging Africa in 2016 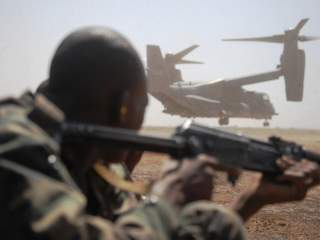 With the exception of Syria, African countries currently get the worst rep when it comes to violence and conflict. Virtually every story coming out of the continent seems to showcase one atrocity or another.

This narrative is both true and false. In 2014, Africa experienced more than half of worldwide conflict incidents, despite having only about 16 percent of the world population. This is a slightly larger share of the world’s conflicts than even during the chaotic years of the post-Cold War 1990s.

But there are two important caveats. First, the absolute number of conflicts worldwide has greatly decreased over the last two decades. So despite shouldering a larger share of the conflict burden, in absolute terms, Africa has become more peaceful as well. And secondly, the remaining conflicts seem to cluster in specific regions and involve only a few of Africa’s 54 nation-states.

According to the Uppsala Conflict Data Program, twelve African countries experienced armed conflict in 2014. Three additional countries—Burundi, Niger and Chad—will likely be added to the list for the 2015 data.

Geographically Africa’s conflicts are tightly clustered along an arc stretching from northern Mali through southern Algeria and Libya into Egypt, extending into the Sinai peninsula.

The Boko Haram conflict in northeastern Nigeria is another epicenter and situated in relative proximity to an area of conflict hot spots in the Central African Republic, eastern Democratic Republic of the Congo, Burundi, South Sudan and Darfur.

On Africa’s eastern coast, the Somali civil war is still going strong in its third decade.

Modern conflicts in Africa are thus highly localized, and they defy simplistic explanations based on stereotypes. That being said, these are our predictions for Africa’s conflicts in 2016.

War Is Boring reported frequently on the conflict between Boko Haram and the Nigerian government throughout 2015 and with good reason. The insurgency is the deadliest conflict that Africa is currently experiencing and has now spread firmly into neighboring countries as well.

Still, there is some hope. Monthly deaths in Nigeria are at their lowest levels in years. Like we expected (or rather hoped) in our 2015 forecast, Nigeria’s new president Muhammadu Buhari made some serious changes to how the conflict is managed, and these now seem to be paying off.

But Nigeria, like neighboring countries, still lacks a long-term strategy on how to deal with the insurgency. Current military successes in combating the diverse groups labeled as Boko Haram are dependent on spending billions on modern military gear that none of the countries involved can actually afford, riding all of them into serious debt.

France and the United States are providing critical assistance, both in terms of intelligence and combating other terrorist groups farther north, so that Niger’s army can focus on the Boko Haram threat. It goes without saying that this is not terribly sustainable.

In 2016, we are looking for the Boko Haram insurgency continue to be a substantial source of violence in Nigeria, Niger, Chad and Cameroon, although not on the extreme level experienced in 2014 and early 2015.

The other international terrorist hot spot in Africa is the Mali-Algeria-Libya triangle. With many groups—including Al Qaeda in the Islamic Maghreb—being active across some of the most arbitrary borders in the world, these conflicts are interrelated. But their resolution will still require primarily national approaches.

Libya officially has a new peace deal, but with the country in open civil war, it will take more than a signed piece of paper to end the violence. The Islamic State also seems to have put its eye on Libya as a potential refuge, should its position in Syria and Iraq come under threat.

Mali is only held together by the presence of international troops and donor money, while still becoming more insecure even in the country’s south. The corrupt and inept political elite obviously has learned nothing from the near collapse experienced in 2012, and there is little hope that it will do so miraculously in the coming year.

The international community is too invested to let Mali collapse, but the population will nonetheless experience widespread insecurity and fighting in the north, while the south will see further terrorist attacks on government institutions and targets associated with the West.

Algeria is a really interesting case. Its politics are so elite-driven and tightly interwoven with the security establishment that they are virtually impenetrable from the outside. President Abdelaziz Bouteflika consolidated power over the last year, but he is a very old man with a confirmed history of serious illnesses.

Algeria’s internal power balance is heavily predicated on using funds generated by the country’s rich endowment with hydrocarbons to buy new toys for its bloated military apparatus, thus keeping officers and enlisted men happy and able to suppress public discontent. With oil prices in a slump and internal conflicts over Bouteflika’s succession, the worst-case scenario would see anger over low living standards and lack of opportunity boil over and mix with elite factionalism.

In that case, with Algeria directly across the Mediterranean, expect an even greater wave of immigration into the European Union.

Dating back to 2012 and 2013 respectively, but being grounded in a much longer history of internal conflict reaching back decades, the conflict in the CAR and South Sudan will hopefully continue to taper off over the span of 2016. Both countries have reached a frail post-conflict compromises in the form of a presidential election in the CAR and a government of national unity in South Sudan.

Of course, central governments had very limited authority in both nations even before civil wars degraded their capacities to basically nothing. So expect to hear some really bad stories about atrocities committed by independent militias and localized violence out of both places.

The DRC’s conflict in the east is a much more long-term affair with dozens of militia groups hanging around after the official 2003 end to the Second Congo War. Low-level violence will persist here as well, with flareups likely in case the U.N. peacekeeping operation MONUSCO decides to bring the hammer down on some of these groups.

With several scandals involving United Nations and other peacekeepers sexually abusing children in 2015, 2016 will see the blue helmets be put under increased scrutiny in all three countries. With elections coming up in the DRC and the government pushing for a smaller role of the United Nations in the Congo’s internal affairs, these stories could well reach strong prominence.

The elections—or rather possibly the refusal of the government to hold any—are a driver for widespread violence in the DRC, with the country still waiting for its first democratic transition of power.

No list of conflicts in Africa would be complete without the catastrophes that Darfur in Sudan and Somalia continue to be. Darfur has experienced an uptick in fighting recently and there is no reason, certainly not the non-existing international attention, why this wouldn’t continue in 2016.

Last year saw the Al Qaeda-aligned Al Shabab on the offensive in Somalia, pushing back some of the territorial gains made by government and African Union troops over recent years. This year is unlikely to bring any truly decisive developments in this conflict, but expect Al Shabab to go on the offensive whenever possible to prove its continued relevance. This includes terror attacks in neighboring Kenya, which has intervened against Al Shabab and has proven to be vulnerable to such attacks due to a corrupt and incapable security sector.

Egypt will see continued internal unrest, especially on the Sinai peninsula, and also will have to grapple with continued terrorist activities against government and tourism.

In Burundi, all bets are off if an all-out civil war can be avoided. Much will depend on the decisions of the African Union in the coming months, with virtually every possible form of intervention fraught with uncertainties. A truly noteworthy development would be the deployment of a military force against the will of the government under section 4(h) of the union’s constitutive act.

One country to watch is South Africa. While the second largest economy south of the Sahara will definitely not devolve into large-scale internal conflict, there are some worrying developments. The economy is going down the drain, President Jacob Zuma is appearing more inept by the day and racial tensions continue to run high—more than two decades after the end of Apartheid.

We wouldn’t be surprised to see some episodes of social unrest with considerable loss of life in 2016, along the lines of the Marikana killings in 2016, although widespread xenophobia and racism could also see South Africa’s population turn against each other, instead of against the state.

Peter Dörrie is the Africa correspondent for War is Boring, where this article first appeared.