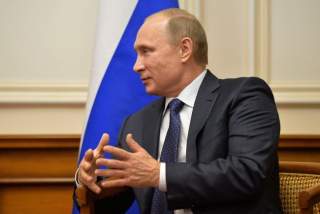 Vladimir Putin’s state-of-the-nation address to the Russian Federal Assembly last week was a telling piece of statecraft.  Now that the country’s relationship with the west have reached a new a nadir, and the impact of western-imposed economic sanctions is beginning to bite at home, Putin’s speech was a timely exposition of the defiant course that Moscow seems intent on charting.  The oration showed that Putin is on the back foot to a certain extent.  But it also highlights some serious limitations to prevailing U.S. foreign policy towards Russia, casting doubt on whether finely-tuned policies of containment ever will be enough to extract meaningful changes in policy from the Russian leader.

While most of Putin’s speech was devoted to announcing economic reforms—tax freezes, deregulation, investment in key infrastructure—and various social policies, there nevertheless was a clear and predictable emphasis on foreign affairs.  Putin celebrated Russia’s annexation of Crimea, stressing the deep cultural, religious and historical roots of Russia’s connection with the peninsula.  He railed against the western policy of “containment,” accusing the west of reflexive antipathy towards a strong and confident Russia.  And he pledged that Russia’s armed forces were ready to meet any and all foreign threats.

Stoking nationalistic sentiment has never been more important for Putin.  For a long time, his domestic popularity—indeed, his very legitimacy as a national leader—hinged upon his ability to deliver economic growth and prosperity.  Now, with the ruble tumbling vis-à-vis the dollar and the Russian economy sliding towards recession in the face of U.S.-led economic sanctions, Putin’s reputation for sound economic stewardship is faltering.  As such, it is hardly surprising that Putin is keen to ensure that the Russian people know to pin the blame for their woes on the western world and not the Kremlin.

Nor is Putin altogether wrong in his diagnosis. Western states do indeed fear a powerful and assertive Russia, and western sanctions—applied in response to Moscow’s policies towards Ukraine—are largely responsible for the economic turmoil currently ravaging the Russian economy.  While it was hyperbolic and inflammatory (likely intentionally so) of Putin to liken contemporary western policy to Hitler’s ambition to “push us [Russians] back beyond the Urals,” it is true that Europe and the U.S. wish that Russian influence would stop at its own borders.  A policy of containment is today being implemented by NATO, albeit to a questionable degree of success.  This policy might not be as colorfully articulated as was Georges Clemenceau’s “cordon sanitaire,” and is not as well thought-through as was George Kennan’s recommendation in the 1940s for the “adroit and vigilant application of counter force,” but it is nevertheless a concrete strategy of containment: a package of foreign economic, diplomatic and military policies aimed at preventing Russia from influencing events in its “near abroad.”

Putin is wrong to suggest that this means the west is bent on destroying or dismembering Russia, however.  This has never been the desire of American or European leaders.  Instead, the nominal goal of western policy is to change Russia, to encourage leaders in Moscow to adopt a new foreign policy tack.  By imposing intolerable costs upon Russia as the price of its interventionism (in Ukraine or elsewhere), the U.S. and Europe hope to bring Moscow to terms and lay the foundations for a relationship whereby Russia will be expected to play by western-designed rules.  At various points during its history, Russia has functioned as an integral and an important member of European and international society, a feared and respected Great Power and even a trusted military ally of the western powers.  The (distant) hope today is that external pressure can shift the needle of domestic politics in Russia such that the country changes course, once again taking its seat at the top table of world diplomacy.

Putin’s recent speech suggests that such an endgame might be wishful thinking.  Instead of empowering doves in Russia (as if such a faction even exists in the Kremlin), the policy of containment risks strengthening the hawks and encouraging Putin to double down on nationalistic words and deeds.  Rather than bringing Moscow to heel, economic sanctions and military balancing appear to be riling Russia’s leadership and closing off the possibility of rapprochement.  This is an unhappy state of affairs for all concerned. More depressingly, a straightforward way out of the current diplomatic abyss is difficult to detect.