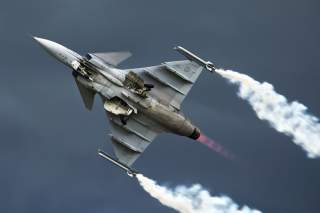 The technical details of air-to-air missiles are extremely complicated, but the concept is simple — destroy your target before the target destroys you.

One way to improve the odds is to add an air-breathing ramjet engine to give the weapon a boost. That’s the design philosophy behind the Meteor, a 419-pound rail-launched MiG killer which entered service for the first time with the Swedish air force on July 11.

Meteor’s exact specifications are classified, and it being the best in the world is debatable. But it’s not unreasonable — and that’s because of the missile’s ramjet.

(Recommended: Why the World's Best Tank Might Be French)

Here’s how it works. A conventional solid-fuel booster accelerates the Meteor after launch, like most air-to-air missiles. But while roaring through the air, the missile opens up a chute, allowing air to rush into the engine, which heats up the oxygen and propels the supersonic missile to Mach 4.

Not only that, the missile can adjust how much oxygen it breathes, conserving energy during the coast phase, only to take a deep breath in the final moments before hitting a target.

The result is that if a targeted plane tries to dodge out of the way, Meteor can overcome it by summoning more thrust, and thus more maneuverability, during those precious few seconds.

Precisely how far the Meteor can go is the big question.

International arms consortiums and governments do not like to openly advertise the specific capabilities of their weapons. That’s especially the case with high-tech ramjets, and all the more because Russia and China are developing their own versions to compete with Meteor.

We do know that one test off Scotland sent the missile “well in excess of 100 kilometers,” an MBDA engineer told AINonline. The firm has boasted of a “no-escape zone” three times that of the U.S.-made AIM-120 AMRAAM — likewise classified.

The no-escape zone is an aerial combat term for a cone-shaped area — determined by the missile’s capabilities — from where a targeted aircraft cannot escape solely using its own maneuverability. Countermeasures and spoofing is a last resort, but otherwise the aircraft has a high probability of getting toasted.

Range and speed is all well and good. But Meteor also needs to home in on a target for the shot to count. For this, Meteor has a datalink connecting its guidance system to the fighter and its more powerful, longer-range sensors.

Meteor is strongly associated with Sweden, although it’s very much a broader European project with the missile conglomerate MBDA working as the manufacturer. Sweden is the first country to make the Meteor operational, but Britain, Italy, Spain, Germany and France are next.

Germany, Spain and Britain intend to equip Meteors on their Eurofighter Typhoons. France will get the missiles for its Rafales. F-35 Joint Strike Fighters could follow.

The country is neutral, and its air force hasn’t fired a shot in anger since the Congo crisis in the early 1960s. But Sweden is a major weapons exporter — the 12th largest according to 2014 data from the Stockholm International Peace Research Institute.

Sweden works closely with the NATO alliance during military exercises. And in May, the Swedish parliament ratified an agreement allowing NATO more room to conduct exercises in the country.

The reason is clearly Russia, which has repeatedly violated Sweden’s airspace and carried out simulated nuclear attack runs on the country. Although greater cooperation with the alliance is controversial within Sweden.

MBDA designed the Meteor to work with the F-35. But as of now, the Block 4 software needed to fire it from the stealth jet isn’t available — and won’t be until the early 2020s in the best case scenario. In May 2016, the U.S. Government Accountability Office warned that the F-35’s software’s “cost, schedule and performance goals” were at risk.

By the time the Pentagon sorts that out, the Meteor will have served for years … with the Gripen.