The World's Most Powerful Aircraft Carrier Will Soon Join the U.S. Navy 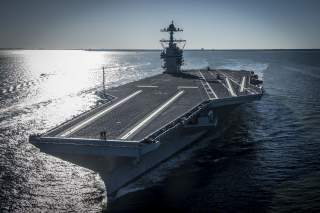 The United States Navy will formally commission Gerald R. Ford (CVN 78) into service on July 22 at Naval Station Norfolk on the Virginia coast.

The new vessel is America’s first new carrier design in over 40 years since USS Nimitz (CVN-68) entered service in May 3, 1975. The Gerald R. Ford (CVN 78)-class will eventually be a “phased replacement” for the Nimitz-class carriers with as many as 10 vessels—or potentially more—eventually being built.

“I am incredibly thankful for the shipyard workers and sailors who worked amazingly hard to bring this mighty ship to life. This Saturday will be a huge day for our Navy and our nation. The new technology and warfighting capabilities that Ford brings will transform naval warfare, making us a more lethal Navy. The increased combat power will enable new ways to combine information, ships, aircraft and undersea forces, changing how we operate and fight.”

According to the Navy, the new carrier honors President Gerald R. Ford, who was the 38th president of the United States and a former officer onboard the light carrier USS Monterey (CVL-26) during World War Two. Current President Donald J. Trump will deliver the ceremony's principal address as has been tradition for the commissioning of new aircraft carriers for decades. Meanwhile, Susan Ford Bales—daughter of the late Gerald Ford—will serve as CVN-78’s sponsor.

The Navy will spend $43 billion developing and building the three Ford-class carriers that Congress has authorized thus far. Those include Ford herself, the future USS John F. Kennedy (CVN 79) and the future USS Enterprise (CVN 80). More vessels will likely be authorized afterwards.

The Ford-class is designed with a host of improvements over the Nimitz-class that should significantly improve quality-of-life for sailors and reduce maintenance costs for the Navy.

Ford also adds improved survivability measures while reducing manning and maintenance requirements. If all of Navy’s projections are realized, the service will save $4 billion in total ownership costs over the life of the ship.

Additionally, Ford—which is based on the Nimitz-class hull form—restores weight and stability margins by reconfiguring the ship’s interior, though she displaces roughly 100,000-tons just like the CVN-68 class (Indeed, one officer noted that while a sea, Ford is much more sporty than the Nimitz thanks to her prodigious horsepower and reconfigured interiors).

There are also huge improvements in technology compared to the Nimitz-class. According to the Navy, the Ford-class incorporates advances in technology such as a much more powerful reactor plant, new propulsion system, new machinery control, and a new electric plant. The new vessels also incorporate Electromagnetic Aircraft Launch Systems (EMALS), Advanced Arresting Gear (AAG), Dual Band Radar and an integrated warfare system. Compared to the previous Nimitz-class carriers, Ford-class vessels have more than 23 new or modified systems. The Navy gave

The National Interest posted a preview of the Ford earlier this month—we were onboard—which can be read here.