There May Be No Way to Counter North Korea's Missiles 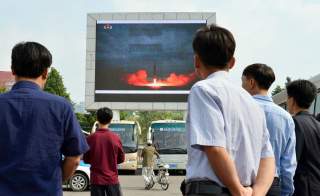 "Earlier this year, our customer requested an enhanced capability to deal with a sophisticated medium-range ballistic missile threat," Mike Campisi, Raytheon's SM-6 senior program director, said. "We did all this – the analysis, coding and testing – in seven months; a process that normally takes one to two years."

Raytheon has delivered more than 330 SM-6 missiles with production continuing indefinitely. However, while the SM-6 will become the mainstay of the fleet, the dedicated ballistic missile defense role falls to the SM-3 variants of the Standard missile. The Standard missile family—and indeed most U.S. theatre missile defenses—has a good track record, but they only offer a limited defense. In the event of a war, thousands of North Korean ballistic missiles would likely overwhelm the system.

Indeed, a 2016 report from the Pentagon’s Director, Operational Test and Evaluation bears that out. "The Regional/Theater BMDS demonstrates a limited capability to defend the U.S. Pacific Command (USPACOM), U.S. European Command (USEUCOM), and U.S. Central Command (USCENTCOM) areas of responsibility for small numbers of medium- and intermediate-range ballistic missile threats (1,000 to 4,000 km), and a fair capability for short-range ballistic missile threats (less than 1,000 km range),” reads the report.

Kingston Reif, director for disarmament and threat reduction policy at the Arms Control Association told The National Interest that he agrees with the report. “Even though these systems have good test records, the capability of our and Japan's regional defenses (Patriot PAC-3, Aegis capable ships armed with SM3-IA and IB interceptors and THAAD) against small numbers of missiles that travel within the defended area of these systems is limited,” Reif said.

Moreover, shooting down North Korean test missiles would be even more difficult—despite the ill-informed pontifications of various commentators. “Shooting down a North Korean missile on a test trajectory—as was the case with the 8/29 HS-12 test—is an entirely different and even more difficult challenge,” Reif said. “Our BMD systems are not designed or postured to defend the open ocean. And we couldn't rely on THAAD, since there are no THAAD batteries in the Japan. Patriot is also a no go, since it is designed to defend against slower short-range missiles during their terminal phase.”

In theory, it might be possible to shoot down North Korean ballistic missiles below the intercontinental ballistic missile (ICBM) class using the U.S. Navy’s Aegis cruisers and destroyers. However, it would be extremely difficult—and would compromise the defenses of populated areas.

“Shooting down a North Korean non-ICBM test might theoretically be possible using SM-3 interceptors launched from Aegis ships in the region,” Reif said. “But it would be a highly demanding task and entail a significant amount of guesswork, as the ships would have to be in the right place at the right time to stop a test at sea. Doing so also would mean taking them away from optimal positions to defend actual targets on land.”

But even then, Reif notes that the SM-3 has only been tested against an IRBM target once. “According to Missile Defense Agency data, the existing Aegis interceptors have only been successfully tested once against an IRBM-class target. The faster SM3-IIA under development by the United States and Japan will provide much great capability versus IRBMs, but it is not yet deployed.”

At best, the SM-3 would be able to intercept a ballistic missile in the mid-course part of its flight. “We'd have no shot against an IRBM, or a MRBM or SRBM for that matter, during the missiles boost phase as that is beyond the capability of the SM-3 interceptor,” Reif said. “For a midcourse intercept, that would depend on the trajectory, how much warning we had, and how many ships were deployed and where (Note: that the recent accidents involving the Aegis-equipped USS Fitzgerald and McCain how many ships the U.S Navy could bring to bear in the region).”

It would have taken an incredible stroke of luck for the United States and Japan to have intercepted the recent North Korean IRBM test. “Aegis ships positioned in the Sea of Japan to protect key populations centers and critical military assets in Japan against SRBMs/MRBMs likely would not have been able to engage an IRBM flying over northern Japan,” Reif said. “Unless a ship happened to be positioned exactly along or near the flight path of the test, midcourse intercept is probably out of the question. A terminal shot—as the RV is reentering the earths atmosphere—might have been possible, but the SM3 has never been tested in that mode and would require North Korea to tell us where the missile would land.”

In Reif’s view, shooting down a North Korean ballistic missile—or worse—trying to shoot one down and missing would be counterproductive. “Even if the stars were aligned however, attempting to shoot down a non-threatening missile test would be hugely provocative act and supply invaluable data to adversaries,” Reif said. “A miss, which is more likely than an intercept, would be embarrassing and undermine confidence in U.S. defenses. Even a hit would be escalatory, expend an expensive round, and create an expectation to shoot down future tests, which could lead to a failure down the road.”

Ultimately, the problem is that missile defenses can be overcome easily by adding more or better decoys and other countermeasures—or simply overwhelming the system with numbers. Interceptors are expensive and several missiles have to be launched at an incoming target to ensure a reasonable probability of kill.

“Calls to shoot down DPRK missiles tests reflect widespread overconfidence in the efficacy and importance of missile defense,” Reif said. “Missile defense is not an escape route from our and our allies vulnerability to a nuclear-armed North Korea, which is taking steps to evade our defenses and can build more missiles to overwhelm our defenses.”

In the end, only diplomacy has any chance of resolving the North Korea problem.