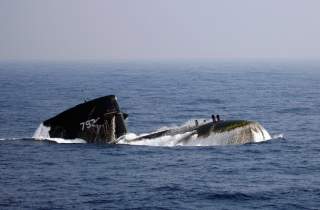 The country with perhaps the most dire need for a modern submarine force in the industrialized world actually has the oldest. Fully half of Taiwan’s submarine force consists of World War II–era boats, while the other half is “just” forty years old. The result is a force that is unable to respond to China’s submarine fleet and cannot adequately protect the country from invasion.

The end of the Chinese Civil War in 1949 resulted in a split between the People’s Republic of China on the mainland and the Republic of China on the island of Taiwan. The Taiwan Strait, a narrow section of the Pacific separating the two Chinas, is anywhere from 80 to 200 miles wide. Although relatively narrow, the presence of the strait—or “The Black Ditch” as mariners used to call it—has prevented one side from conquering the other and settling the China problem by force.

From the end of the war to the 1990s, Taiwan enjoyed a slowly ebbing naval superiority that prevented a Chinese Communist invasion. China simply did not have the sealift to transport hundreds of thousands of troops across the strait and conquer Taipei, nor did it have the surface fleet and air force to support an invasion. A consistent double-digit increase in Beijing’s defense spending since 1992, however, has slowly but surely swung the pendulum to the side of the Communists.

While invasion is still impractical, the People’s Liberation Army (PLA) grows stronger daily. In its 2017 annual report to Congress, the Pentagon estimates that Taiwan’s military forces are badly outnumbered by regional PLA forces. China outnumbers Taiwan twenty-four to four in destroyers, forty-two to twenty-two in frigates and seventy-five to forty in coastal missile patrol boats. In submarines, China outnumbers Taiwan thirty-four to four.

A powerful Taiwanese submarine fleet would go a long way towards deterring a Chinese invasion. A submarine threat to a ship-bound invasion force would cause considerable unease to a People’s Liberation Army Navy entrusted to delivering tens, if not hundreds of thousands of combat troops across hostile waters onto Taiwanese beaches. China would need to devote considerable resources to neutralizing the undersea threat. Compounding the issue is that, unique among modern navies, China has never conducted a antisubmarine warfare campaign in any form.

Taiwan’s current submarine fleet consists of two Dutch-made submarines, ROCS Hai Lung and ROCS Hai Hu. The Hai Lung class ships were built in the Netherlands from 1982 to 1986 and are elderly by diesel electric submarine standards. Each displaces a maximum 2,600 tons underwater, can make 20 knots submerged, and has a crew of sixty-seven. Main sensors consist of the Thales SIASS-Z integrated passive/active sonar suite, a ZW-06 navigation/search radar. The subs have six 553mm torpedo tubes for Mark 48 heavyweight torpedoes and UGH-84 (Block I and Block II) Harpoon anti-ship missiles. In 2016, The Diplomat reported that Taipei was planning to refit the Hai Lung class to extend their service lives another fifteen years.

Thirty year old submarines are the good news. The bad news is that the rest of Taiwan’s fleet consists of a pair of ex–U.S. Navy submarines dating to World War II. The first submarine, ROCS Hai Shih, is the former Tench-class submarine USS Cutlass, while ROCS Hai Pao is the former Balao-class submarine USS Tusk. Both submarines were transferred to Taiwan in the early 1970s for antisubmarine warfare training and were considered, even then, unfit for frontline service. The two submarines were transferred to Taiwan with their torpedo tubes welded shut, but there are reports they have been reopened. They are also capable of laying sea mines.

In 2017, Republic of China Navy Chief of Staff Lee Tsung-hsiao announced his country would develop and manufacture a fleet of eight submarines in the 1,200 to 3,000 ton class. Starting in 2016, Taiwan allocated $99 million over four years to cover development costs for the submarines. However, Taiwan cannot reasonably develop all of the necessary technologies involved within a reasonable time frame. In 2017, Defense News reported that Taiwan was struggling with five key technologies, including periscopes and torpedo tubes, and experts believed foreign technology would ultimately be necessary to make the eight submarines a reality. The first submarines are hoped to be ready for service by 2027.

A small, scrappy force of eight Taiwanese submarines would be a powerful deterrent to Chinese military action and a inducement for both sides to settle the China question peacefully. Whether or not Taipei can ultimately built that force is open to question, as Chinese economic, political and military power stifles Taiwan’s ability to defend itself—even in peacetime. In the meantime, Taiwan’s relative weakness against China’s military power only grows.